Why is it believed Brahma Sutras were written by Rishi Ved Vyasa?

However, the author mentioned in the Brahma Sutras is 'Badarayana'.

It has some verses which are considered written against Agamas, but Sage Vyasa Himself praised agamas in Mahabharata, the Linga Purana, Shiva Purana which are all written by Vyasa too also praises Agamas. Even many rituals mentioned in Shaivite Puranas are Agamic.

So how can people claim and why is it believed Brahma Sutras were written by Sage Rishi Ved Vyasa?

According to Kanchi Paramacharya (Chandrashekarendra Saraswati) too, Veda Vyasa and Badarayana are the same person.

He mentions about this in this chapter of the book called "Hindu Dharma", which is comprised of his various speeches/talks.

In the Brahmasutra, on which there are commentaries according to the various philosophical schools, Vyasa presents in an extremely terse form the substance of the ten (principal) Upanisads. Since he dwelt under the badari tree (jujube) he came to be called "Badarayana" and his work became well-known as "Badarayana-sutra". Who or what is man (the individual self)?

And, besides that, the Devi Bhagavatam explicitly mentions Veda Vyasa as the author of the Vedanta Darshana Sutras (which is another name for the Brahma Sutras).

Seeing this distressed and sorrowful state of his father, S'ûkdeva, with eyes full of wonder, said :-- Oh! What a power has Mâyâ got? Oh! He, whose words are accepted by all, with great love and care as equivalent to the Vedas, who is the author of the Vedânta Dars'ana, and before whom nothing is veiled in ignorance, Oh! that greatest Pundit, the knower of all the Tattvas, is now deluded by Mâyâ? Oh! what is that Mâyâ who has been able to delude Vyâsa Deva, the son of Satyavati, so skilled in the knowledge of Brahmâ Vidyâ; I also do not know how, with what great care, one is to practise Sâdhanâ towards Her. Alas! He who has composed eighteen Mahâ Purânas and the great Mahâ Bhârata, who has divided the Vedas in four parts, the same Veda Vyâs has today been deluded by the power of Mâyâ! What to speak of other persons!

Therefore, this also shows that Badarayana is in fact Veda Vyasa.

The possible explanation of your question is provided by author of the book Vedanta-Darshan (Brahma Sutra) Harikrishna Das Goyandaka by Gita Press.

In his introduction of the book , the author is precisely talking about your question and the doubts regarding this matter. According to the author ,there is no problem in believing that the brahma sutras were authored by Ved -Vyasa whoes other name is also Badarayana. Below is the english translation of the explanation from the book.

Herewith i would like to discuss some explanatory things regarding Brahma-Sutras.This is (Brahma-Sutras) is very ancient text. Some scholars think that its a fairly new one , by looking at the criticism of Samkhya , Vaisheshika ,Buddha, Jaina , Pashupata and Pancharatra. And do think that Badrayana is different from Ved-Vyasa. But this is their false notion. The philosophies which are criticized in Brahma-Sutras are the eternal opinions /philosophies/views are eternal which are in flow i.e. those views are timeless . The great debate between SadVada and AsatVada(Astika and Nastika) is going on since from the ancient Vedic time itself. The Sutrakara not mentioned the Acharyas of these philosophies anywhere in his work. He only reviewed "PradhanKaranVada(Samkhya) , AnukaranVada( vaisheshika) , VigyanVada etc. The word Badrayana is associated with Ved-Vyasa since long and used to mention one person only. Panini also mentioned the name of the text Bikshu-Sutras by son of the Parashara called Vyasa

This proves that Brahma sutras were written By Sage Rishi Ved Vyasa , whoes another name is Badarayana. And they both are same. And Buddhism and Jainism etc. mentioned /criticized were views /thoughts ,which are present from the beginning i.e. Astika VS Nastika.

Here is the screenshot of the above introduction in Hindi. In Puranas also Shree Ved-Vyasa is called as a Badrayana. For example Shreemad Bhagvat Purana calling Rishi Ved-Vyasa as Badaryana in the following Shloka.

O suta ! Whatever the venerable Badrayana greatest among the learned ones ,knows and whatever other sages who knows saguna and nirguna brahman. 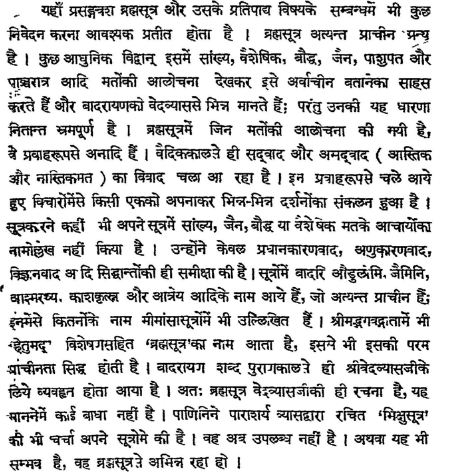 Not the answer you're looking for? Browse other questions tagged scripture brahma-sutras vyasa .

7
What is the story of Badarayana Vyasa?
3
Is Adi Shankaras sub-commentary (Vivarana) on Vyasa's Patanjali Yoga sutras commentary available online or as PDF book?