The Sri Vaishnava sect has two sub-sects, Thenkalai and Vadakalai. Vadakalais follow the teachings of Vedanta Desikan, whereas Thenkalais follow the teachings of Pillai Lokacharya and Manavala Mamunigal. My question is about Manavala Mamunigal. He was a 14th century Acharya considered by Thenkalais to be an incarnation of Vishnu's serpent Adiseshan and a rebirth of Ramanujacharya. Here is how this webpage describes him: 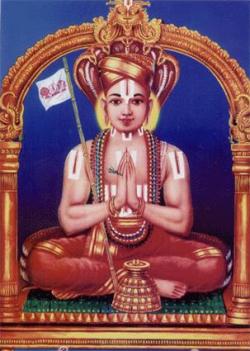 I'm interested in the part in bold. My question is, what is the story of Ramanujacharya's shishya Gomadathalwan, ancestor of Manavala Mamunigal?

Here is all this list of Ramanujacharya's shishya says:

2
Where does Krishna criticize Arjuna's indifference to Draupadi's disrobing?
3
What scriptures describe a Gopi dying upon hearing Krishna's flute?
3
Were Periyalwar and Andal reborn as cowherds?
4
Is Velukkudi Krishnan from a Swayamacharya lineage?
9
Did Vedanta Desikan debate Tuvarapati Kavalar?