Reference to the 7 chakras in Hinduism

There are seven chakras in a Human body as Yoga and Tantra prescribes. These are: 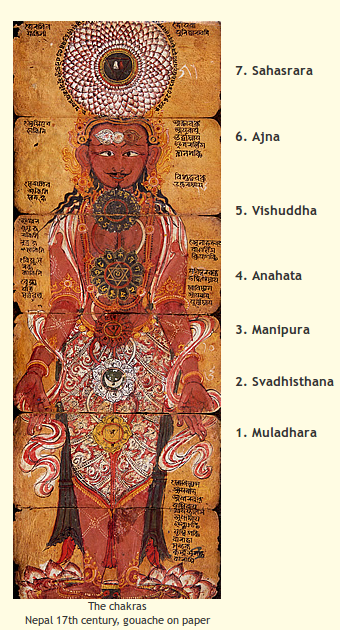 Chakras are supposed to be mystic power centres in human body along the spine. Kundalini Shakti (often called Serpent Power) is dormant in a normal human and has to be awakened to reach ultimate consciousness.

When the Kundalini awakens, it uncoils up breaking open these chakras and activating them untill the Shakti unites with her Shiva at Sahasrara Chakra. Tantric traditions give immense importance to awakening of Kundalini Shakti.

The awakening of each Chakra is supposed to elevate ones consciousness to higher levels along with providing certain siddhis to the yogi. The eight siddhis (Ashtasiddhi अष्टसिध्दि) are:

This ascent through the chakras can be viewed as an upward journey through the self which refines and subtilizes the energy that is the kundalini, until at the sixth chakra, the Ajna, center of command, a qualitative change has taken place. The chakras are centers of transformation of psychic or mental energy into spiritual energy.

Chakras are the major energy centres of our subtle body. So, there are not only 7 but many other chakras also. However 7 Chakras are considered the main. The refrences of 7 chakras and Kundalini Shakti are in Puranas and Upanishads. Lalita Sahasranama stotra from Brahmanda Purana gives the most precise description of Kundalini in just 3 verses.

Thus from above we can know there are 7 Chakras including Sahasrara chakra. There are three knots called Brahma granthi, Vishnu granthi and Rudra granthi. These knots are formed because Ida and Pingala nadi which are left and Sushumna nadi ties in these Chakra and forms knots. Thus it makes difficult to pass Kundalini from these Chakra. As first knot is itself present in Muladhara so it becomes a bit difficult to Kundalini Shakti to pierce this knot. Brahma knot is present around Manipura and Swadhisthana area. Vishnu knot is present in Manipura and Anhata area. Rudra knot is present in Ajna Chakra area. 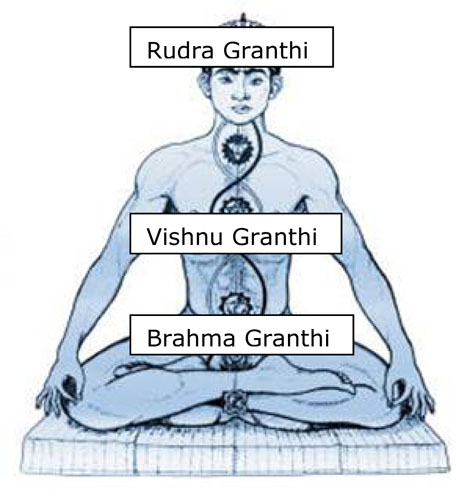 Other chakras are also mentioned in Lalita Sahasranama from verse no. 98 to verse no. 109.

Chakras are also described in Skanda Purana in the chapter "The Tandava Dance of Shankara ". There it describes how music originated from Chakras. It has also relation with Beeja mantra associated with Chakras. 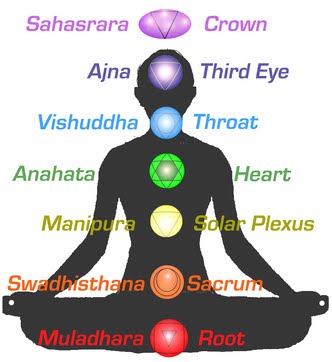 The Suta Samhita of Skanda Purana has a separate chapter called 'NadiChakra Nirupana". It deals in details about the position of Nadi and Chakras.

There are about 20 Yoga Upanishads which deal with the description of Nadis and Chakras.

52-53. Of these, the chief ones are ten and carry the Pranas. Ida, Pingala, Susumna, Gandhari, Hastijihva, Pusha, Yasasvini, Alambusa, Kuhuh and Sankhini are said to be the ten.

54-55(a). This Chakra of the Nadis should ever be known by the Yogins. The three Nadis Ida, Pingala and Susumna are said to carry Prana always and have as their Devatas, moon, sun and Agni.

55(b)-56(a). Ida is on the left side and Pingala on the right side, while the Susumna is in the middle. These three are known to be the paths of Prana.

56(b)-57. Prana, Apana, Samana, Udana and Vyana; Naga, Kurma, Krikara, Devadatta and Dhananjaya; of these, the first five are called Pranas, etc., and last five Naga, etc., are called Vayus (or sub-Pranas).

58. All these are situated (or run along) the one thousand Nadis, (being) in the form of (or producing) life. Jiva which is under the influence of Prana and Apana goes up and down.

8(b)-9(a). Having known Vayu, the above-mentioned Bindu and the Sattva-Prakriti as well as the six Chakras, one should enter the Sukha-Mandala (the Sahasrara).

9(b)-11. There are six Chakras. Muladhara is in the anus; Svadhisthana is near the genital organ; Manipuraka is in the navel; Anahata is in the heart; Visuddhi is at the root of the neck and Ajna is in the head (between the two eyebrows).

12. Having known these six Mandalas (spheres), one should enter the Sukha-Mandala (Sahasrara), drawing up the Vayu and should send it (Vayu) upwards.

13. He who practises thus (the control of) Vayu becomes one with Brahmanda.

There are other superb texts like Hatha Yoga Pradipika, Goraksha Shatakam written by Guru Gorakhnath and other Agama texts which deal in detail about Kundalini Yoga.

This Chapter of Devi Bhagvata Purana consists of very precise description of Chakras and Nadis. It also deals with some minor chakras.

कृत्वा समानावनिलौ जितासना सोदानमुत्थात्य च नाभिचक्रतः । Then she carried the life air upwards and placed it in the position of equilibrium near the Nabhi Chakra/ Navel Chakra [Manipura Chakra.] (S.B. 4.4.25) 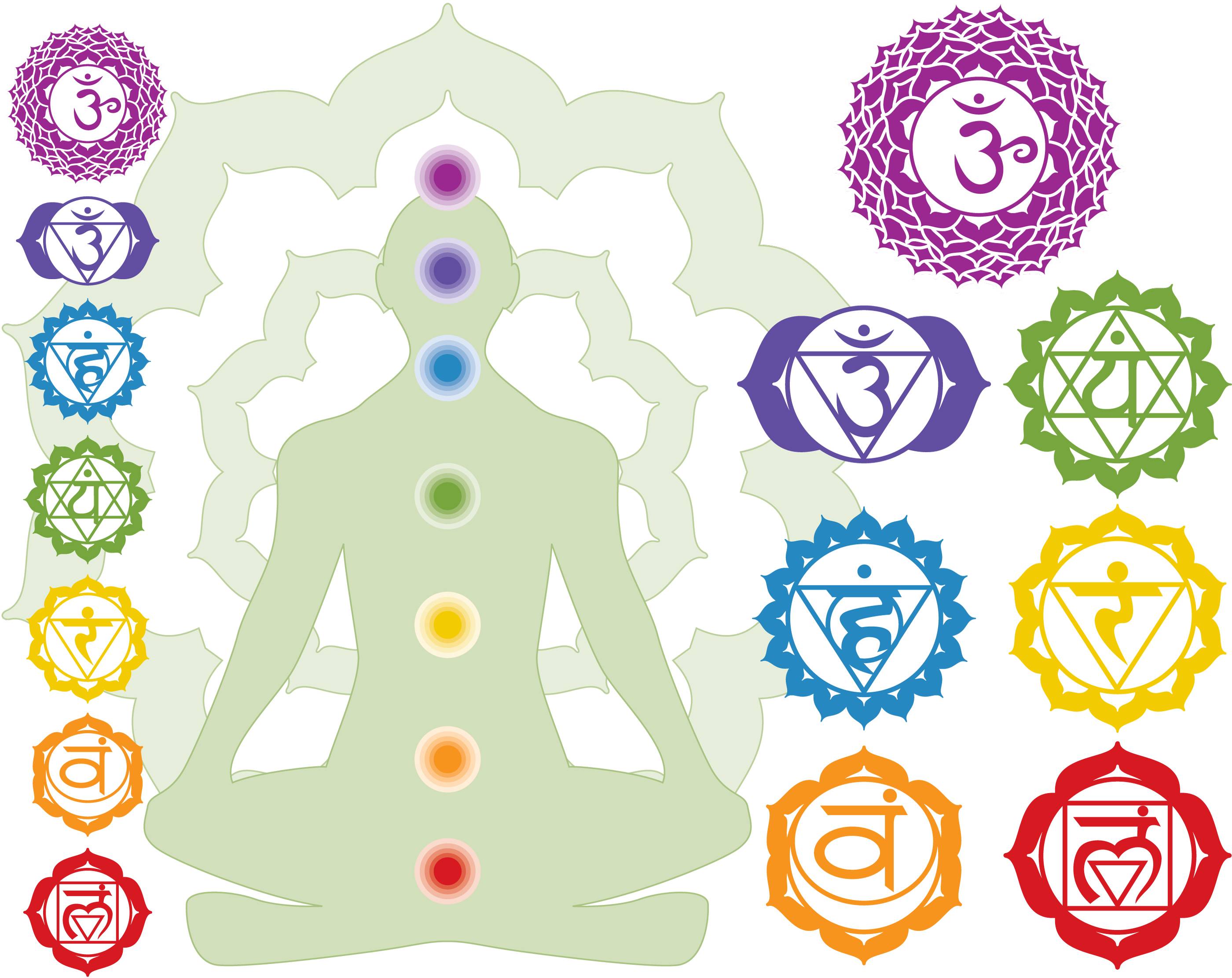 Read Kundalini: An untold story by Om Swami for additional information about Mythology (History) of Kundalini Vidya and its practice (though it is highly recommended to learn this Kundalini Yoga under a competent Guru).

Excerpts from a Q&A with Sri Sri Ravi Shankar:

You would have heard about the seven chakras (energy centers) ; it is One Energy that manifests itself in various forms.

In the first chakra (Muladhara), at the base of the spine, the energy manifests as enthusiasm or inertia.

When the same life force energy comes to the second chakra (Swadhisthana), it manifests as sexual energy or creative or procreative energy.

The same energy goes up to the navel region, the third chakra (Manipura), and manifests in four different forms, which relate to four different emotions - greed, jealousy, generosity and joy. That is why all these four emotions are depicted through the tummy.

The same emotion comes to the fourth chakra (Anahata), the heart chakra; manifests as three different emotions which are love, hatred and fear.

The same energy then goes in between the eyebrows to the sixth chakra (Ajna), and manifests as anger and alertness. Anger, alertness, knowledge, and wisdom are all related to the third eye centre.

Not the answer you're looking for? Browse other questions tagged scripture yoga chakras .

0
What will happen if one unlock all the chakra in his/her body?
8
What do Scriptures tells us about Kundalini?
9
Where is the Manipura Chakra located?
5
Did Mother Sati become a ghost after committing sucide?
13
Yogic liberation like raising kundalini vs Bhakti path
8
What is the most authentic form of yoga?
7
Why do some Hindus say "ram ram" twice?
8
What scriptures mention correlation between Kailasa and Sahasrara?
5
What are the letter of alphabets (varnas) associated with each of the Seven Chakras?
6
Scriptural Explanation of the "Siddhis" of the "Yoga Sutras"
See more linked questions

7
What are the shodashAdhAras the first six of which are the shatchakras?
3
What are the beeja mantras and what is their significance in meditation?
10
Vedanta and Kundalini
4
What are the Siddhis associated with each of the Chakras based on the scriptures?