What is the story behind Padmanabha Swamy?

Recently I was reading about Padmanabha Swamy temple where the treasure was unlocked.

I have seen a statue of lord Vishnu where he is resting over Anant Naag and from his Nabhi, lotus is coming out in which lord Brahma resides. So what is the exact story behind this?

What is the relation of Brahma with Padmanabha Swamy and how did they got the treasure?

Lord Vishnu is widely regarded as the Supreme Creator. In our religion he is shown reclining on the coils of a gigantic, seven-hooded serpent called Ananta-Sesha, in the middle of the cosmic milky ocean.

Both Vishnu and Ananta-Sesha and are eternally present through the periodic cosmic cycles of creation and destruction. The Vishnu Purana states that at the end of a “Day of Brahma” (1000 Mahā-Yugas = 1 Kalpa = 1 day (day only) of Brahma), when the entire creation has been dissolved, and the world has been converted into one vast ocean, “the Supreme reposes upon his mighty serpent couch amidst the deep: he awakes after a season, and again, as Brahma, becomes the author of creation.” 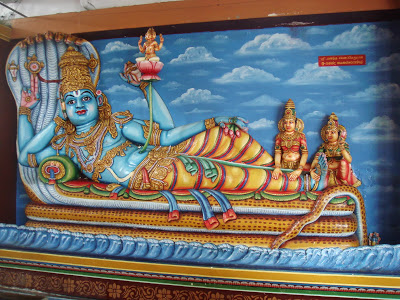 The above image is from Munneswaram Temple, Sri Lanka

The emerging lotus flower from the navel of Vishnu (vishnu nabhi), on which Brahma is seated is set to bring forth the material of creation. Hence, Vishnu is described as “lotus-navelled” (padma-nabha); and Brahma is termed the “navel-born” (nabhija). 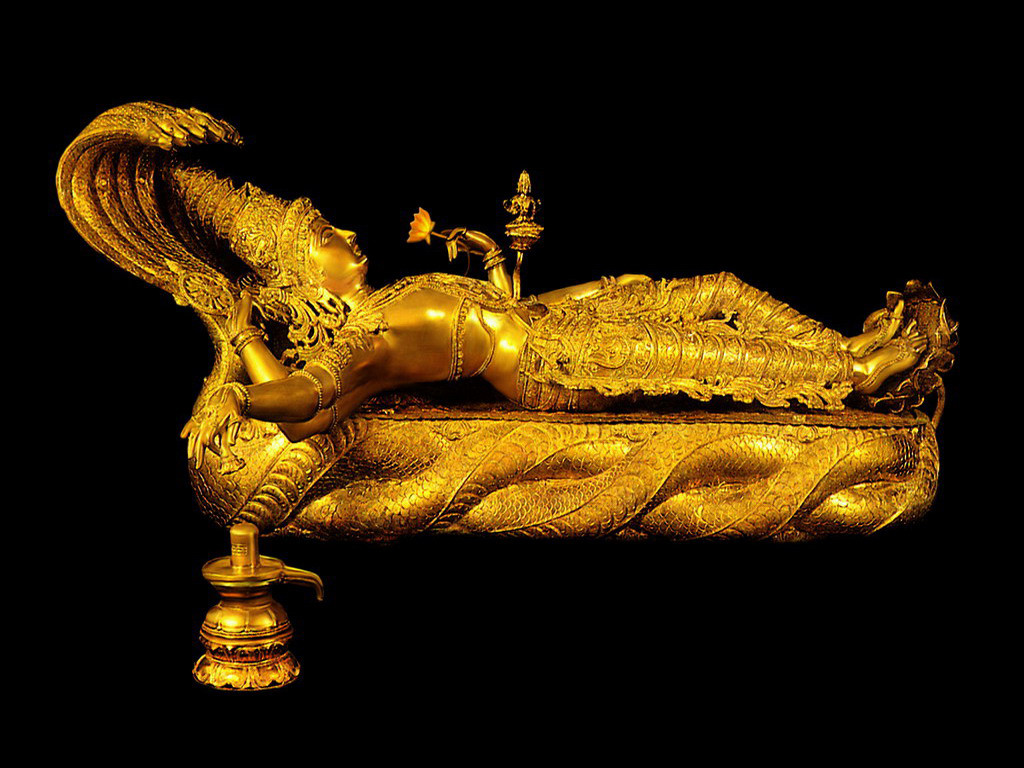 The above image is a 32 kg idol of Vishnu in Ananta Sayanam pose apart form the shiva linga which was shot of the treasures which were unearthed form temple.

As for the treasures of the temple it is a very old temple as many purana's like Brahma Purana, Matsya Purana, Varaha Purana, Skanda Purana etc, states about that shrine.

Late in the middle of 17th and 18th century the Anizham Thirunal Marthanda Varma took over the throne at the age of 22 from Ettuveetil Pillamar due to some conspiracy, and as the temple has 6 chambers labelled form 'A to F' has been present from the day of construction of temple, it was used to store the valuables of the ruling king as a safe deposit and only the king and the high priest of the temple were allowed to go inside the vault, until recently when chamber 'A' was opened.

NOTE: chamber B has not yet opened due to fear of bad omen as they did Ashtamangala Devaprasnam which might cause Divine displeasure

They also had gold coins of East India Company. It is assumed that when the British had war with the southern kings, they hid most of the treasures in that vault and was asked to seal it off and was never seen again until recently.

Travancore Empire was one of the richest Empires in India. It extended 900 year of rule. It had accumulated wealth through trade with European Nations.

The European Christian missionaries back then used to act as spies, taking valuable information from local society so the European empires can use it to their advantage. Travancore was situated at the cost and was vulnerable to attacks via sea. So it was logical to bury all the secret stuffs in places like temples where missionaries were not welcome.

After a series of killings within the royal family, the king decided to give up the crown to god. He declared Lord Vishnu (Padmanabha) as King. The King became God’s servant(Padmanabha dada). This tradition continued until the disestablishment in 1949.

The temple was the Royal treasury. It was not any secret that the temple has all this jewels. The jewels for many occasions such as Coronation, are kept in the temple. Since Coronation did not happen in recent times, it was left unopened.

The wealth presence was not announced to public so as to avoid robbery. The kingdom was attacked by Hyder Ali once and Tippu sultan twice, all failed attempts. Mysore was Wodeyars- a hindu kingdom which lasted over 450 years. For a brief period of 30 years the Army chief Hyder Ali and son controlled the kingdom after a Coup d tat.

Travancore also was attacked by Dutch East India Company - A battle which Dutch lost. This was the first major win of an Indian empire against a European power. The Dutch battalion surrendered to Travancore and had to join the Travancore army and helped modernised arms that helped resist Tippu and Hyder invasions.

Not the answer you're looking for? Browse other questions tagged vishnu temple .

6
Why are women not allowed in the Kartikeya Temple at Pushkar?
7
Legend behind origin of Vayu Lingam in Srikalahasti and its meaning