Is the concept of sin (papa) developed in Rig Veda?

By the time of Shatapatha Brahmana incest had become taboo. But in the Rig Veda, Pusan is said to be the wooer of his mother and the lover of his sister Dawn.

Did the concept of sin only develop after Rig Veda?

The concept of Sin is already present in Rig Veda and other answers are explaining that too. But as you are specifically looking for the sin of type as incest, so it is also present in Rig Veda, Mandala 10, Sukta 10. In this Sukta Yami is convincing Yama (her brother) to make him as her husband but Yama refused because for him it was a sin.

12 I will not fold mine arms about thy body: they call it sin when one comes near his sister. Not me,—prepare thy pleasures with another: thy brother seeks not this from thee, O fair one.

5 Those, God, who count thee as a worthless bullock, and, wealthy sinners, live on thee the Bounteous,— On fools like these no blessing thou bestowest: Bṛhaspati, thou punishest the spiteful.

Did the concept of sin only develop after Rig Veda?

22 Whatever sin is found in me, whatever evil I have wrought.If I have lied or falsely sworn, Waters, remove it far from me.

7 If we have sinned against the man who loves us, have ever wronged a brother, friend, or comrade,The neighbour ever with us, or a stranger, O Varuṇa, remove from us the trespass.

In Rig-Veda the idea of sin is not only limited to moral order or Dharma or laws of gods , but also includes Ritual Error. i.e. errors ,mistakes happen during yajna or singing of mantras etc.

6 If he, thy true ally, hath sinned against thee, still, Varuṇa, he is the friend thou lovedst.Let us not, Living One, as sinners I know thee: give shelter, as a Sage, to him who lauds thee.

Conclusion - The Rishis (seers) of Rig- Vedic period were aware of the concept of the sin. Apart from deliberately disobeying the laws of gods , and intentional sin due to greed etc. They were considering unknowing or unintentional mistakes /errors in following Dharma , conducting yajna etc. also as a sin and were praying for the forgiveness of those sins by them or who came before them. So concept of sin did not only developed after Rig Veda. Or during puranic times.

Below is the screenshot names of all the hymns of Rig-Veda where sin is mentioned and prayer is made. 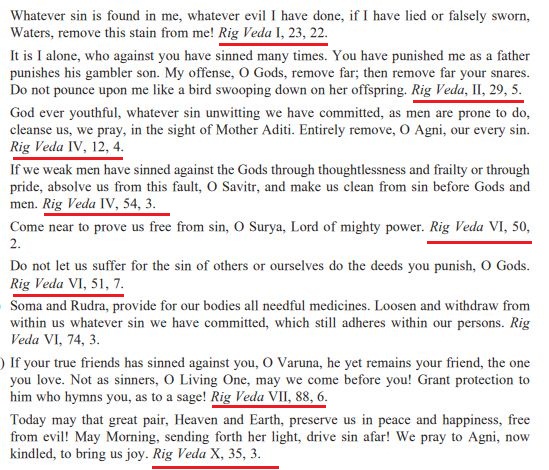 NO we have the concept of sin in Rig Veda itself.

And, Aghamarshana literally means the destroyer of sin (agha).

I take refuge in Varuna, who is of golden lustre or who has a golden diadem. O Varuna, being entreated by me, grant me the saving grace. For I have enjoyed what belongs to bad people and accepted gift from sinners. May Indra, Varuna, Brihaspati and Savita completely destroy that sins committed by me and my people in thought, word and act. Salutations to fire hidden in water. Salutation to Indra. Salutation to Varuna. Salutation to Varuni, the consort of Varuna. Salutation to the deities of waters. (Through the power of this mantra). let all that is injurious, impure and troublesome in water be destroyed

Besides that, there can be more references, particularly from the Pavamanas.

Not the answer you're looking for? Browse other questions tagged rig-veda sin .

5
What are the vedic definitions for paapa and punya?