What is the Vedic concept of universe creation? [duplicate]

vedas universe
Share
Improve this question
asked May 6 '18 at 7:58

In this answer I will not be quoting the exact verses initially, however I will be providing the links wherein you can read.

The Vedic concept of creation includes the "HOW" and the "WHY" of the entire cosmic manifestation.

What was there before creation?

The compassion of the Lord towards living entities: Lord is mercifully putting so much endeavour from His side to reclaim conditioned beings, creating universe, residing as supersoul in heart to guide and sanction jiva’s desires, maintaining and winding the universe, sending acharyas to reclaim fallen souls and so on. [SB 3.5.3]

The Lord felt incomplete without His plenary expansions and unsatisfied, so he desired to create the manifestation. The material potency was dormant. [SB 3.5.24]

CREATION IN BRIEF (From Srimad Bhagavatam)

The merging of the living entity, along with his conditional living tendency, with the mystic lying down of the Maha-Visnu is called the winding up of the cosmic manifestation. Liberation is the permanent situation of the form of the living entity after he gives up the changeable gross and subtle material bodies.

After separating the different universes, the gigantic universal form of the Lord [Maha-Visnu], which came out of the causal ocean, the place of appearance for the first purusa-avatara, entered into each of the separate universes, desiring to lie on the created transcendental water [Garbhodaka].

From the sky situated within the transcendental body of the manifesting Maha-Visnu, sense energy, mental force and bodily strength are all generated, as well as the sum total of the fountainhead of the total living force.

The living force, being agitated by the virat-purusa, generated hunger and thirst, and when He desired to drink and eat, the mouth opened.

From the mouth the palate became manifested, and thereupon the tongue was also generated. After this all the different tastes came into existence so that the tongue can relish them.

Thereafter, when the supreme purusa desired to smell odors, the nostrils and respiration were generated, the nasal instrument and odors came into existence, and the controlling deity of air, carrying smell, also became manifested.

Thus when everything existed in darkness, the Lord desired to see Himself and all that was created. Then the eyes, the illuminating god Sun, the power of vision and the object of sight all became manifested.

When there was a desire to perceive the physical characteristics of matter, such as softness, hardness, warmth, cold, lightness and heaviness, the background of sensation, the skin, the skin pores, the hairs on the body and their controlling deities (the trees) were generated. Within and outside the skin is a covering of air through which sense perception became prominent.

Thereupon, because of His desiring to control movement, His legs became manifested, and from the legs the controlling deity named Visnu was generated. By His personal supervision of this act, all varieties of human being are busily engaged in dutiful occupational sacrifice.

Thereafter, when He desired to move from one body to another, the navel and the air of departure and death were combinedly created. The navel is the shelter for both, namely death and the separating force.

When there was a desire to have food and drink, the abdomen and the intestines and also the arteries became manifested. The rivers and seas are the source of their sustenance and metabolism.

When there was a desire to think about the activities of His own energy, then the heart (the seat of the mind), the mind, the moon, determination and all desire became manifested.

The seven elements of the body, namely the thin layer on the skin, the skin itself, the flesh, blood, fat, marrow and bone, are all made of earth, water and fire, whereas the life breath is produced by the sky, water and air.

Thus by all this, the external feature of the Personality of Godhead is covered by gross forms such as those of planets, which were explained to you by me.

Therefore beyond this [gross manifestation] is a transcendental manifestation finer than the finest form. It has no beginning, no intermediate stage and no end; therefore it is beyond the limits of expression or mental speculation and is distinct from the material conception.

According to the different modes of material nature—the mode of goodness, the mode of passion and the mode of darkness—there are different living creatures, who are known as demigods, human beings and hellish living entities. O King, even a particular mode of nature, being mixed with the other two, is divided into three, and thus each kind of living creature is influenced by the other modes and acquires its habits also. 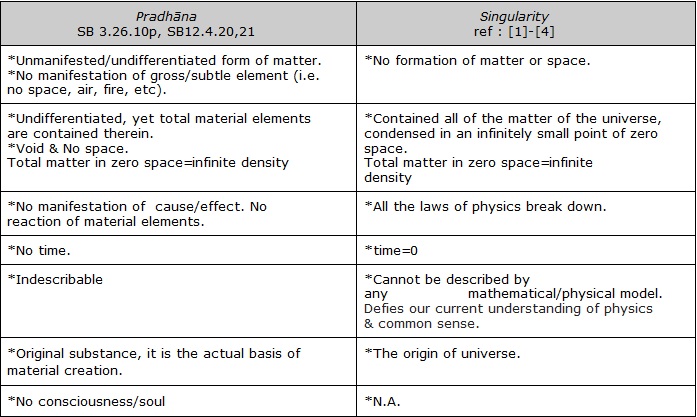 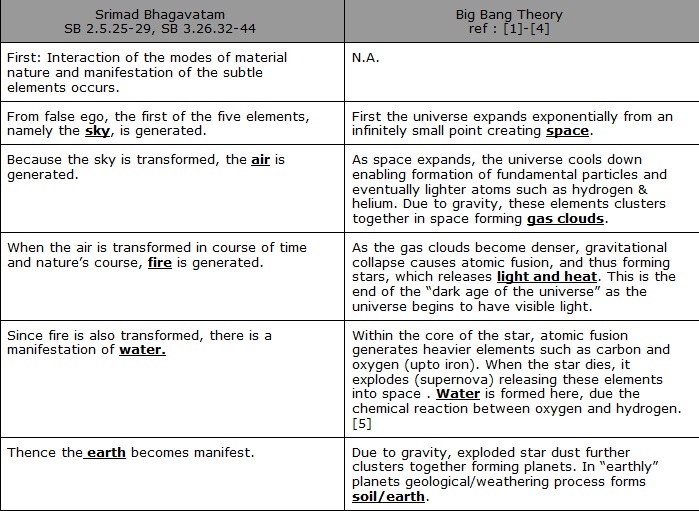 Not the answer you're looking for? Browse other questions tagged vedas universe .

27
How was the universe created?

2
Where do Vedas state Universe being a projection in space-time?
3
What are some scriptures that talk about maha kalpa?
4
Beyond the manifestation of Time
4
Are there any verses related to the beginning of everything?