Do scriptures specify how animals should be killed during the sacrifice?

I think the horse in the Ashwamedha was killed with knives. The Somavajapeya involves suffocating the sacrificial animal if I am not mistaken.

Do scriptures specify how animals should be killed during the sacrifice?

Yes, the horse in the Ashwamedha is suffocated with a cloth.

As you can see, they really kill a real horse and it's not some metaphorical description. The reference to Yama loka proves this. The soul of the horse goes to the world (loka) of Yama, who is the god of death. There is no reason to interpret these words metaphorically.

No, vedas do not mention killing of animals during sacrifice.

Brahmana texts & shrauta sutra texts on Ashwamedha Yagya only mention presence of knife during ritual, nowhere do they mention usage of knife for killing the animal.

Killing of animal is only symbolic as described by satapatha brahmana 3.8.1.15:

From above verses it can be seen that it is the mouth (mukham) of the animal that is covered with a cloth or noose. Now an animal dies of suffocation only when its nose is closed. Closing the mouth of the animal will not suffocate animal, it only chokes the voice of animal resulting in little or no sound leading to quieting of animal. This is what is referred in above verses as symbolic killing.

So wherever vedas say kill the animals it means quieting the animal.

Formerly, on one occasion Sakra performed a particular sacrifice. While the limbs of the sacrifice were spread out, the Ritwijas became busy in accomplishing the diverse rites ordained in the scriptures. The pourer of libations, possessed of every qualification, became engaged in pouring libations of clarified butter. The great Rishis were seated around. The deities were summoned one by one by contented Brahmanas of great learning uttering scriptural Mantras in sweet voices. Those foremost of Adhwaryyus, not fatigued with what they did, recited the Mantras of the Yajurveda in soft accents. The time came for slaughtering the animals. When the animals selected for sacrifice were seized, the great Rishis, O king, felt compassion for them. Beholding that the animals had all become cheerless, those Rishis, endued with wealth of penances, approached Sakra and said unto him, 'This method of sacrifice is not auspicious. Desirous of acquiring great merit as thou art, this is verily an indication of thy unacquaintance with sacrifice. O Purandara, animals have not been ordained to be slaughtered in sacrifices. O puissant one, these preparations of thine are destructive of merit. This sacrifice is not consistent with righteousness. The destruction of creatures can never be said to be an act of righteousness.

mahAbhArata shAntI parva CCCXXXVII gives an example of ashwamedha where animals were not slain:

King Uparichara, otherwise called Vasu, became a disciple of Vrihaspati and soon became the foremost of his disciples. Admitted as such, he began to study at the feet of his preceptor that science which was composed by the seven Rishis who were (otherwise) known by the name of Chitrasikhandins. With soul cleansed from all sorts of evil by sacrifices and other religious rites, he ruled the Earth like Indra ruling the Heaven. The illustrious king performed a great Horse-sacrifice in which his preceptor Vrihaspati became the Hota. The sons of Prajapati (Brahman) themselves, viz., Ekata, Dwita, and Trita, became the Sadasyas in that sacrifice. 2 There were others also who became Sadasyas in that sacrifice, viz., Dhanusha, Raivya, Arvavasu, Parvavasu, the Rishi Medhatithi, the great Rishi Tandya, the blessed Rishi Santi, otherwise called Vedasiras, the foremost of Rishis, viz., Kapila, who was the father of Salihotra, the first Kalpa, Tittiri the elder brother of Vaisampayana, Kanwa, and Devahotra, in all forming sixteen. In that great sacrifice, O monarch, all the requisite articles were collected. No animals were slain in it. The king had ordained it so. He was full of compassion. Of pure and liberal mind, he had cast off all desires, and was well-conversant with all rites.

The Kings does Ashwamedha Yagya and after that they release that Horse, and till where the Horse goes that land is claimed by the King if anyone opposed he has to fight with the Army of the King who did Ashwamedha Yagya.

the translation of the word 'medha' is often not interpreted as sacrifice. There are words like 'purushamedha' and 'sarvamedha'. Sarvamedha definitely doesn't mean sacrificing everyone.

Please see the second answer of this question, which is very correct and it related directly to Dharm.

What is the significance of Ashwamedha Yagna? 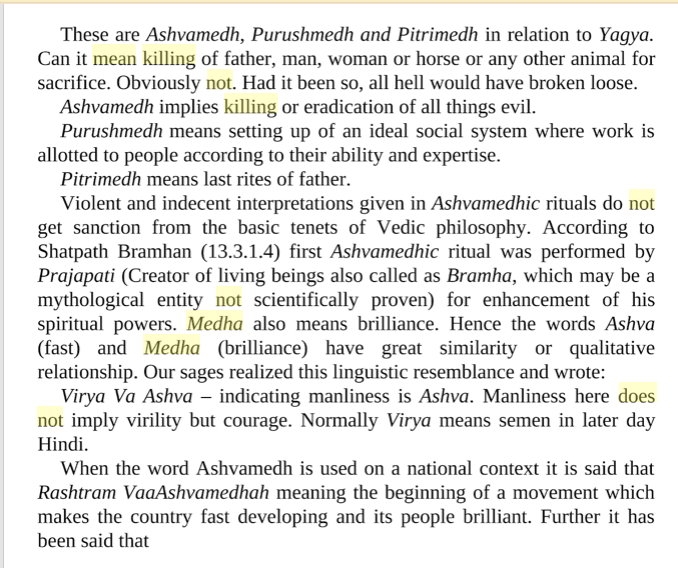 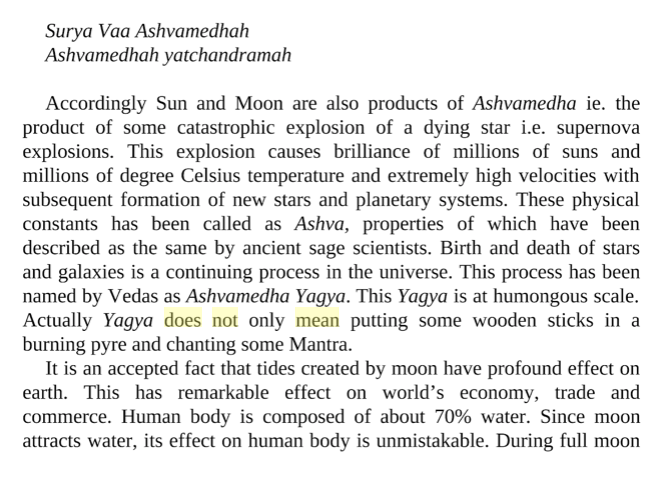 You can take a look at this link on Google Books.

First of all, the synonym of Yajna used in Vedas is ‘Adhvara’ which means ‘non-killing”. Nirukta 1.8 says ‘dhvar’ means kill, and ‘Adhvara’ denotes the negation of killing (which is non killing).

Mahabharat, Shantiparv 265.9 “Liquors, fish, mead, meat, rice cooked with sesamum seeds- all these have been inserted into Yajna by the wicked people. Vedas have not prescribed their use in Yajnas”.

Lord Krishna in Srimad Bhagvatam 11.21.30 says, “People who find enjoyment in violence, out of wickedness and for gratification of their pleasure they slaughter animals, offer the meat in Yajan’s….”

So animal slaughter is completely prohibited.

15
Where is it written that Kshatriyas are eligible to eat meat?
13
What do the Vedas say about animal sacrifice?
13
Is eating meat allowed if the animal died naturally?
14
What is the significance of Ashwamedha Yagna?
15
Where do the Vedas mention sacrificing vegetable seeds rather than goats?
3
What is validity of different translation of word" Mamsah"?

9
Which scriptures say that the Kings and Kshatriyas are allowed to hunt animals?
7
What's the response to the Cārvāka thought on animal sacrifice in a yajña?
7
Which 299 animals were sacrificed in the Ashwamedha besides the Horse?
6
Do Hindu scriptures talk about how to handle conflicts between prescriptions in scripture and the secular law of the land?
6
How are animals killed in the Soma Yajna?
7
Did any sect reject animal sacrifice from the time of its founding?
3
Scriptural reference of Prabhupada's commentry on S.B. 4:19:11