Is "Vishishtadvaita" a scriptural term? Is there any instance where it is used in scriptures?

Both these terms- Advaita, Dvaita- are found in scriptures, including the Upanishads.

Now, there is yet another philosophy having the name "Vishishtadvaita".

Presumably by 'scripture', you're referring to one of the ancient texts belonging to one of Shruti, Smriti, Itihasa, Purana and not the works of recent Acharyas. If that is the case, the term 'visistadvaita' cannot be found in the scriptures and it is a relatively modern (post-Ramanuja) invention. Ramanuja himself is not known to have used the term in any of his 9 works including the Sribhashya and the Vedartha Sangraha.

The earliest known reference to the term "visistadavaita" occurs in the 17th verse of the Ramanuja Ashtottara Shatanaama Stotra of Vaduga Nambi also known as Andhrapurna.(Ref: See minutes 7-10 of this video where the presenter makes this point. https://www.youtube.com/watch?v=9eKZmluRd2M&t=420s)

Vaduga Nambi was a disciple of Ramanuja, hence a contemporary although it is quite likely he composed the verse sometime after Ramanuja passed away..

The term was invented in order to comply with the rules of prosody when composing this verse. The technically correct term that describes Ramanuja's philosophy would be "saviśeṣādvaita" or "non duality (advaita) with differences".

The term Visistadvaita ended up becoming more popular although when discussing the theoretical issues in orthodox circles, saviśeṣādvaita is frequently used as well.

Sudarsana Suri is also said to have used this term in the Tatparya Dipika and the Srutaprakasika (although I have not verified it myself) and Vedanta Desika has defined the term in the Nyaya Siddhanjana. (Ref: 'Antiquity of the term Visistadvaita' by Dr. V Varadachari. I have not seen this paper but a number of other works refer to it. Here is one such citation of this work in this context:) 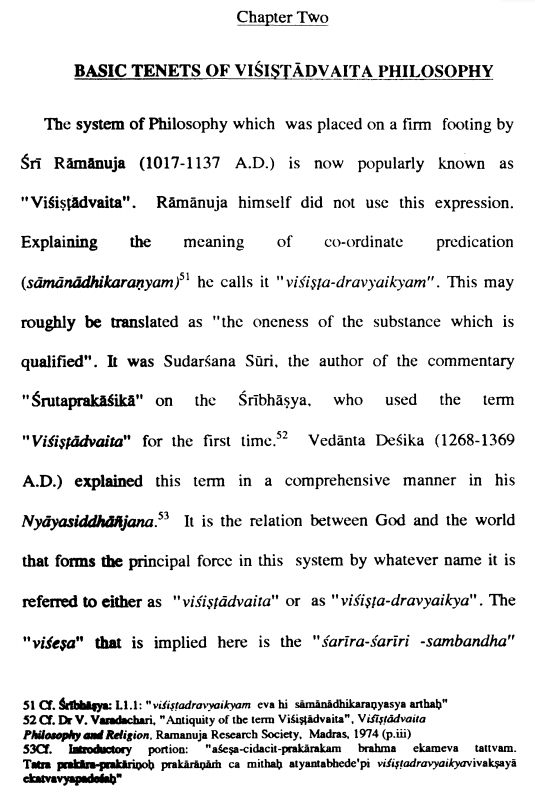 Not the answer you're looking for? Browse other questions tagged scripture philosophy identification-request vishishtadvaita .

7
Are any Sri Vaishnava commentaries of the Isha Upanishad available online?
10
Are there any surviving quotes from Baudhayana's commentary on the Brahma Sutras?
4
What is the story of Vikhanasa, founder of the Vaikhanasa school?
17
According to ShankarAchArya in Advaita, is the universe "unreal" or "unworthy"?
8
How do Sri Vaishnavas interpret the "Vedas are not Vedas" quote in the Brihadaranyaka Upanishad?
17
What exactly is a leela (लीला)? Is there a scriptural definition of leela (लीला)?
10
Apart from the Padma Purana, does any other Purana say that Adi Shankaracharya will teach mayavadi philosophy?
9
Is there a Darshana/Philosophy based on Agamas?
24
Are there any scriptures that portray Lord Rama to be the source of all incarnations including Lord Vishnu?