Is there any God/Deity of Electricity?

Ancient civilization must have knowledge of electricity thanks to thunderbolt. In today's time, we cannot imagine anything without electricity.

Is there any God for electricity (Vidhyut)?

He is the god of the firmament, in whose hands are the thunder and the lightning; at whose command the refreshing showers fall to render the earth fruitful.

In the Vedas, Indra is the king of Svarga (Heaven) and the Devas. He is the god of the heavens, lightning, thunder, storms, rains and river flows.[6] [Wikipedia]

To prove this we consider one more context during Dwaparyuga, in Nanda Gaon when Lord Krishna intentionally told everyone to stop worshiping Indra to overcome Indra proudy nature and that led to heavy raining and lightening in Nanda Gaon . But later Lord Krishna saved everyone by taking all the people of Nanda Gaon under the Govardhana parvat.

According to Brihadaranyaka Upanishad:

Another translation from Vedanta Spiritual Library:

In the book of Adi Shankaracharya Bhashya on Brihadaranyaka Upanishad by Gita press Gorakhpur, the Sanskrit word स्तनयित्नु is taken as विद्युत्

So, Indra is equated with Vidyut i.e Indra is the deity of cloud, thunder and electricity.

Well, Indra is certainly associated with the thunderbolt but he is more a God of Rain and Thunder rather than of electricity. The proper god for this role could be one of the sons of Agni known as Pavaka.

The Vayu Purana Chapter 29, Progeny of Agni mentions the following:

1-2. A mental son of Brahma was the deity identifying himself with Agni (the Fire-god) in the Svayambhuva Manvan- tara. Svaha bore to him three sons: Pavaka, Pavamana and §uci or Saura (solar- fire).

The Hindi text of Vayu Puran uses the word Vaidyut for him: 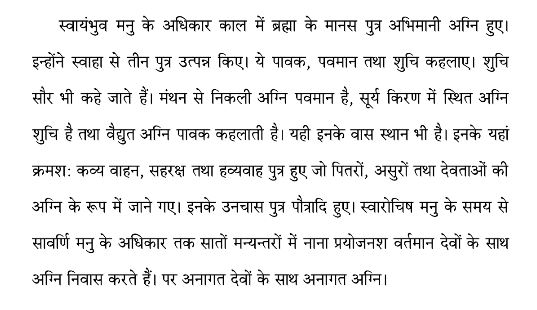 The Shatapatha Brahmana 2.2.1 also sort of corroborates the same by saying:

Hence, I feel Pavaka, the son of Agni, seems a more likely candidate for being called the god of electricity while Indra could be like an overlord who makes use of his powers via the thunderbolt.

Not the answer you're looking for? Browse other questions tagged gods history goddess vedic-gods nature .

4
Are there any female trinities in Hinduism?
4
Which Hindu god/deity has most temples?
3
Is there any specific deity who cuts sins?
9
Is nature a deity in Hinduism?
10
Is there any god / deity for the mathematics?
4
Are there instances wherein a God/Goddess met his/her incarnation?
13
Is there any Hindu god associated with muscle/muscle strength?
5
Which God is known as God of Silence?