What are duties and goals of a Brahmin and how should he behave?

Can anyone say the duties of a Brahmin and how he should behave? What should be his goals?
As said in Bhagavat Gita, One should follow his own duties to attain liberation and so. If with any references It would be nice.

Daily duties of a Brahmin:

Allowed means of subsistence for the Brahmins:

10.76. But among the six acts (ordained) for him three are his means of subsistence, (viz.) sacrificing for others, teaching, and accepting gifts from pure men.

However, in times of distress, a Brahmin can betake the jobs that are prescribed for the lower castes. According to Parashara Smriti, he can even take up agriculture.

A Brahmin who's ignorant of the Gayatri Mantra, who's not learned in the Vedas, who's not maintaining the sacred fire or not performing his aforementioned duties well, is a Brahmin just for the namesake. He is actually considered just as a Shudra.

60.The king must punish the village where brahmanas take alms without doing austerities and vedic study as it is a theft.

An uneducated Brahmin is like an elephant made of wood or a deer made of leather: all three are so only in name.

Brahmins who are not learned, who do not teach, or who do not maintain the sacred fires become equal to S´udras. 2 On this point they cite a verse of Manu: When, without studying the Veda, a twice-born man strives after other matters, he quickly sinks to the level of a S´udra in this very life together with his descendants.

Some further relevant passages from VDS 8.17:

He should be intent on privately reciting the Veda, offering sacrifices, and begetting offspring. He should honour anyone who comes to his house by rising up to meet him, offering him a seat, and giving kind greetings and unstinting praise; and all creatures by giving them food according to his ability.

When a Brahmin always carries water with him, always wears the sacrificial cord , always recites the Veda privately, avoids the food of outcastes, has sexual intercourse with his wife during her season, and offers sacrifices according to the rules, he does not fall from the world of Brahman

So, according to Rishi Vashishta, these are the things a Brahmin must always be doing if he wants to achieve liberation (or the world of Brahman).

Here are some quotes about duties, goals and conduct required to be a Brahmana.

Serenity, control of the sense, austerity, purity, straight-forwardness, knowledge, insight, and faith in the Supreme Being - these are a Brahman's duties born of his own nature.

Yudhisthira said, " In human society, O mighty and highly intelligent serpent, it is difficult to ascertain one's caste, because of promiscuous intercourse among the four orders. This is my opinion. Men belonging to all orders (promiscuously) begat offspring upon women of all the orders. And of men, speech, sexual intercourse, birth and death are common. And to this the Rishis have borne testimony by using as the beginning of a sacrifice such expressions as -- of what caste server may be, we celebrate the sacrifice. Therefore, those that are wise have asserted that character is the chief essential requisite ... whatsoever now conforms to the rules of pure and virtuous conduct, him have I ere now, designated as a Brahmana.”

Vyasa said, ‘Him the gods know for a Brahmana who is freed from attachments of every kind, who is observant of penances, who lives like space which while holding everything is yet unattached to any thing, who has nothing which he calls his own, who leads a life of solitude, and whose is the tranquillity of soul. The gods know him for a Brahmana whose life is for the practice of righteousness, whose righteousness is for the good of them that wait dutifully upon him, and whose days and nights exist only for the acquisition of merit. The gods know him for a Brahmana who is freed from desire, who never exerts himself for doing such acts as are done by worldly men, who never bends his head unto any one, who never flatters another, and who is free from attachments of every kind.’

Vyasa said, ‘Even this is the behaviour of a Brahmana possessed of vision. He that hath studied all the Vedas, having waited dutifully on his preceptor and observed the vow of Brahmacharya, he that knows all the Richs, Yajuses, and Samans, is not a regenerate person. One that behaves towards all creatures as if one is their kinsman, and one that is acquainted with Brahma, is said to be conversant with all the Vedas. One that is divested of desire (being contented with knowledge of the Soul), never dies. It is by such a behaviour and such a frame of mind that one becomes a truly regenerate person. Having performed only various kinds of religious rites and diverse sacrifices completed with gift of Dakshina, one does not acquire the status of a Brahmana if he is devoid of compassion and hath not given up desire. When one ceases to fear all creatures and when all creatures cease to fear one, when one never desires for anything nor cherishes aversion for anything, then he is said to attain to the status of Brahma. When one abstains from injuring all creatures in thought, speech, and act, then he is said to acquire the status of Brahma. There is only one kind of bondage in this world, viz., the bondage of desire, and no other. One that is freed from the bondage of desire attains to the status of Brahma.’

Bhrigu said, 'He is called a Brahmana in whom are truth, gifts, abstention from injury to others, compassion, shame, benevolence, and penance. He who is engaged in the profession of battle, who studies the Vedas, who makes gifts and takes wealth (from those he protects) is called a Kshatriya. He who earns fame from keep of cattle, who is employed in agriculture and the means of acquiring wealth, who is pure in behaviour and attends to the study of Vedas, is called a Vaisya. He who takes pleasure in eating every kind of food, who is engaged in doing every kind of work, who is impure in behavior, who does not study the Vedas and whose conduct is unclean, is said to be a Sudra. If these characteristics be observable in a Sudra, and if they be not found in a Brahmana, then such a Sudra is no Sudra, and such a Brahmana is no Brahmana.'

As per Chapter 2 (Varnashrama Dharma) of Kurma Purana, there are six types of action that are recommended for brahmanas. These are

In times of emergency, a brahmana is allowed to adopt the livelihoods of kshatriyas or vaishyas to earn a living. ~ as discussed in Can Brahmin be a teacher on any other topics other than Vedas

As per Varna Ashrama chapter of Brahma Purana, 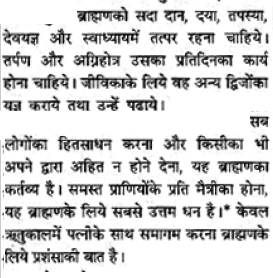 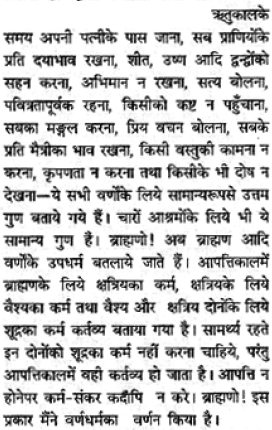 Not the answer you're looking for? Browse other questions tagged dharma brahmins varna .

8
Can Brahmin be a teacher on any other topics other than Vedas
7
Who becomes a Brahmin?
4
What are the correct mantras while giving arghya to Surya?

6
What are the ancient & modern career options for a Kshatriya?
7
How do we decide what is dharma and adharma?
6
What should I [strictly] do to follow Hinduism as a way of life?
7
If a brahmin has qualities of sudra should he be prohibited from duties of a brahmin?
1
How does Sonadanda's characterization of a Brahmin agree or disagree with other definitions in scripture?
7
According to guṇa-based varṇa system, at what age can one be certified a brāhmaṇa, kṣatriya, etc?
4
What are the quotes, from various scriptures of early Vedic times to early medieval times which define the term Mlecchas as distinct from Brahmins?