Is the verse about Indra forcing himself upon Ahalyā present in the Critical Edition of Rāmāyaṇa?

The translation of Vālmīki Rāmāyaṇa on this site says Indra forced himself upon Ahalyā:

Thereupon she propitiated the ascetic Gautama saying, "O twice born one, I was unwittingly ravished by Indra, assuming thy form. I have not committed this willingly, O ascetic so do thou be propitiated with me."

Ahalya having said this, Gautama replied "In the race of Ikshwakus, there shall be born a highly effulgent and mighty car warrior, known in the world as Rama; for performing the rites of a Brahman, the mighty armed Vishnu, assuming a human form, shall repair to the forest.

This obviously contradicts the earlier version from Bāla-kāṇḍa that says Ahalyā knew it was Indra who came disguised as Gautama:

On knowing the meantime of Gautama's availability at hermitage, Indra, the husband of Shaci Devi and the Thousand eyed god wearing the guise of sage Gautama and becoming such a sage, approached Ahalya and said this to her. (1 48 17) Oh, finely limbed lady, indulgers do not watch out for the time to conceive, as such oh, slender waisted one, I desire copulation with you. (1 48 18) Oh, Rama, the legatee of Raghu, though knowing him as the Thousand eyed Indra in the guise of her husband Gautama, she is inclined to have intercourse ill advisedly, only to satisfy the impassion of the King of Gods. (1 48 19)

She felt fulfilled in her heart of hearts and then she said this to that best god Indra, I am gratified in complying with your wish, oh, best of Gods, get going oh, lord, from here quickly, oh, ruler of Gods, always safeguard yourself and me from Sage Gautama. Thus, Ahalya said to Indra. (1 48 20, 21a)

How does the Critical Edition of Vālmīki Rāmāyaṇa resolve this contradiction?

Is the verse from Uttara-kāṇḍa present in the critical edition?

Thereupon she propitiated the ascetic Gautama saying, "O twice born one, I was unwittingly ravished by Indra, assuming your form. I have not committed this willingly, O ascetic- so do you be propitiated with me."

But the above verse is not present in critical edition of Valmiki Ramayana found here or here.

I am not sure what you call the Critical Edition of Rāmāyaṇa but it is not from those 5 Sargas which are believed to be interpolated. This shloka can be found in 30th Sarga (this number is after removing 5 interpolated Sargas else it would be 35th Sarga) of UTTARA KANDA of Valmiki Ramayana: 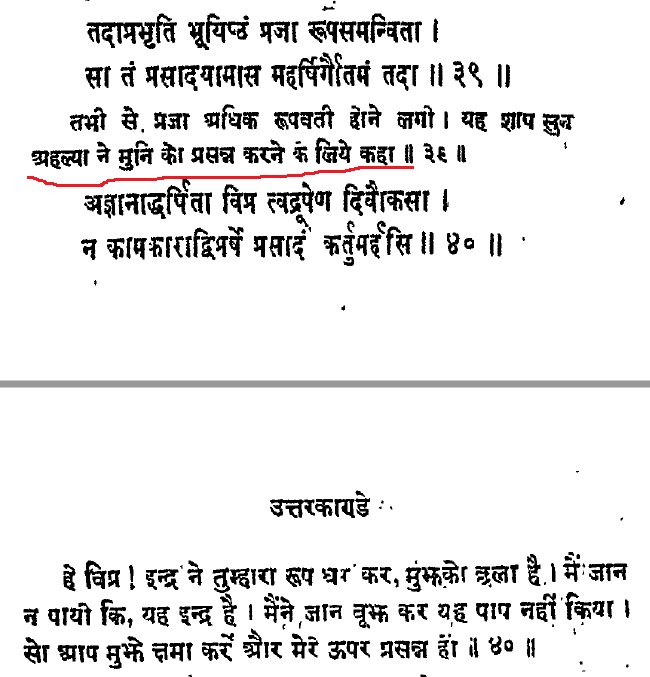 As shloka clearly says that these lines were said by Ahalya to propitiate Gautama so they might not be 100% true.

Not the answer you're looking for? Browse other questions tagged ramayana indra critical-edition ahalya .

21
What is the story of Mahabali's sister's attempt to destroy the world?
15
Was the story of adultery of Indra in the story of Ahalya a PRAKSHIPTA?
9
Which scripture mention Race among the Gods to marry Ahalya?
6
Why did BORI excise the Vyāsa-Gaṇeśa conversation from its critical edition of the Mahābhārata?
9
Discrepancy in Valmiki Ramayana
3
Is the verse about Rāmāyaṇa containing 24,000 ślokas present in the critical edition?
4
Why did Gautama Muni curse Ahalya? Did she know about Indra before Gautama muni cursed her?