Where does Vishwamitra's parallel creation of constellations of stars and galaxies exist?

From my answer to a previous question, it was pointed out that Vishwamitra himself attempted to create a parallel world in addition to Brahma's, in which to transport Trisanku in his mortal body.

"'Let there be eternal heaven to Trishanku with his mortal body. Next, as along as the worlds remain, let all of these stars and galaxies I have created also remain eternally in their places as my creation. It will be apt of you all gods to accede to this.' So said Vishwamitra to gods.

"When all the gods are addressed thus they replied the eminent saint Vishwamitra saying, 'so be it! Safe you be! Let all the created objects prevail in their respective places. Those amazing and numerous stars you have created will remain in firmament, but outside the path of stelliform of Cosmic Person. Trishanku will also remain in the circle of stars you created, but upside-down, for Indra's indict cannot be annulled, and he will be gleaming like a star and similar to any celestial.

Brahma's creation can be more or less mapped to scientific accounts of the material world, through careful and minute Shastra analysis. However, my question is, which physical body/bodies represent Vishwamitra's parallel creation, which were destined to "remain eternally in their places"? Assuming they do exist, is it even known to us, where they currently are, and which ones they are? I don't require parallels with modern science. Are there any names of these bodies, mentioned in Shastras?

Yes the Ramayana gives a bit more detail about the possible location of the creation of Vishwamitra. According to the Bala Kanda of the Valmiki Ramayan:

"Like the other Creator that resplendent Vishvamitra, himself staying among sages, has replicated Southerly Ursa Major in southerly direction. And still remaining amidst of sages that highly reputed sage Vishvamitra further started to replicate the stereotyped stocks of stars sequentially, resorting to the southern hemisphere, as he is convulsed in anger at Indra.

On replicating the stereotyped stocks of other galaxies and stars, and while fury continued to blemish him Vishvamitra said, 'I will now clone an alternative Indra, or let that realm created by me remain without any Indra,' and when he is about to proceed to clone even gods in his wrath, the gods are startled. The gods are highly startled at Vishvamitra's creation, and they along with demons and with observances of hermits addressed the great-souled Vishvamitra with placatory words.

Though these verses don't exactly tell us the name of the constellation but it does tell us that it is perhaps similar to the Ursa Major or Saptarishi and exists in the Southern Hemisphere. If you know a bit about the astronomical chart, there is a constellation known as the Crux or Southern Cross which was used for navigation by sailors much like the Saptarishi helps in pointing to the Pole Star or Polaris that we know as the Dhruv Tara. 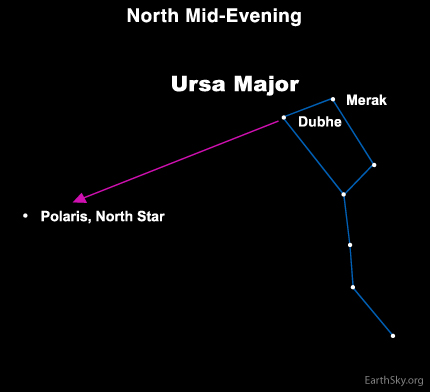 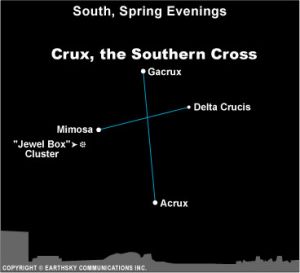 As mentioned by the wikipedia page on Crux:

In the Southern Hemisphere, the Southern Cross is frequently used for navigation in much the same way that Polaris is used in the Northern Hemisphere. Alpha and Gamma (known as Acrux and Gacrux respectively) are commonly used to mark south. Tracing a line from Gacrux to Acrux leads to a point close to the Southern Celestial Pole.

Both the constellations of Saptarishi and Trishanku therefore serve a similar purpose of guiding towards the poles in their respective hemispheres. The wikipedia page for Trishanku also mentions that Trishanku corresponds to the collection of three crosses around Crux, also known as the Southern Cross based on a page on Astronomy. So this seems to be the most likely candidate given the little information we have.

And just to add a bit of science, these are not just five stars rather these are star systems that are about 10-20 million years old. As per this constellation guide:

The stars of the Southern Cross – Alpha, Beta, Gamma, Delta, and Epsilon Crucis – form an asterism that really looks more like a kite than a cross. The stars Alpha, Beta and Delta Crucis are co-moving members of the Scorpius-Centaurus Association, a young association of stars in the constellations Scorpius and Centaurus that belong to the spectral class O and B, have common proper motion, and are believed to have formed inside the same giant molecular cloud. 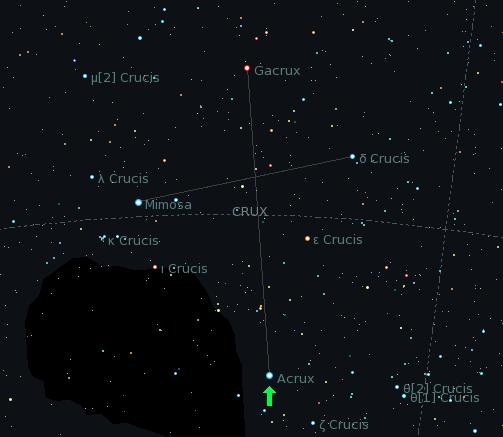 α Crucis (Alpha Crucis), also known as Acrux or HD 108248, is a bluish star that marks the bottom of the Southern Cross when you are facing south. It is the brightest star in the constellation Crux. It is really a multiple star system with a combined apparent magnitude of 0.77, making Acrux the 13th brightest star in the night sky.

As you may be aware the constellations that we see from the earth are not actually located in the same pattern. The different stars of these apparently identifiable shapes are sometimes located thousands of light years away and are completely unrelated to each other.

However, as mentioned in the above excerpt, if the principal stars of the Crux emerged from the same cloud of stardust it is likely that were created at the same time which kind of supports Vishwamitra's hand in it.

10
Is Vishwamitra also a creator of a new Universe like Brahma?

9
Does Hinduism also have the Creation Story?
1
Good and Bad Creation
2
Asking questions against creation and doings of God in hinduism?
11
Where does Rig Veda states about Cyclical Nature of Creation?
4
what are the smallest and the largest unit of measurement of time used in vedic calculation and universe creation?
5
Where does the `real Ayodhya` lies and where does the Lord Ram born?
5
Why does the Universe exist?