Kindly forgive me for the length of this answer.

Since his Avatharam in Bhulokam, Nammazhwar did not cry or ask for food like other babies of his age and hence was named Maran. He closed his eyes and entered the state of Samadhi (deep meditation) in the hollow of a tamarind tree for 16 years (this tree can still be seen at Thirukurugoor or Azhwar Thirunagari, which is the Avathara Sthalam of Swami Nammazhwar. 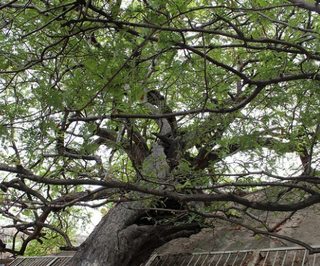 Sri Madhurakavi Azhwar was born earlier than Swami Nammazhwar at Thirukolur, about 2 miles north to Thirukurugoor. He was well-versed in the Vedas and Shastras and had a good knowledge of Sanskrit and Tamil. He had great devotion toward Sriman Narayana. To facilitate attaining Moksha, he thought of going for a Yatra towards the North Indian Kshetras like Ayodhya, Mathura, Kasi, Dwaraka etc. He converted this thought into action and started for the North Indian Sthalas. There, he worshipped all the Vishnu Sthalams and finally went to the Ayodhya temple and admired the beauty of Sri Raman along with Sita Piratti, Lakshmana and Hanuman. He stayed in Ayodhya for a while.

There, one night, he saw a strange light that was very brightly glowing like a forest fire in the South. Though the light looked strange, Madhurakavi considered it to be a normal phenomenon and went back to sleep. But he continued to see that light night after night and he decided to follow it. He left Ayodhya, going in its direction. He observed that bright object was a star which was travelling Southwards. He was following the star, when he finally reached Azhwar Thirunagari and the star merged with the luminous Nammazhwar sitting in the hollow of the tamarind tree.

Madhurakavi on seeing him could not believe that a child can live without eating or even moving a bit for 16 years. With great difficulty, Madhurakavi succeeded in drawing out Nammazhwar from his deep Samadhi. Finally, Nammazhwar slowly opened his eyes and smiled at Madhurakavi. Madhurakavi was still confused whether he could speak or not.

Wanting to test him, Madhurakavi questioned him as follows:

Setthathin Vayitril Siriyadhu Pirandhal Edhai Thindru Enge Kidakkum? literally meaning, “If in the womb of a dead, a small subtle thing is born, what does it eat and where does it reside?” The philosophical meaning is that “This body is made of lifeless material elements. What does the soul, which has life, eat and where does it stay in the body?”

The philosophical meaning is that “The soul has to subsist on matter to sustain the material body and stay in this material world where spirit cannot be distinguished from body, and do good or bad actions, and hence be unable to attain Moksha.”

On hearing this answer, Madhurakavi Azhwar realised that Nammazhwar is neither deaf nor dumb, but a person of great philosophical knowledge. He fell at Nammazhwar’s feet and immediately decided to take Nammazhwar as his Acharyan.

Now, for the second part of your question, Sri Madhurakavi Azhwar is the only one out of the 12 Azhwars who has NOT performed Mangalasasanam to any of the 108 Divya Desa Perumals. He wrote ONLY Kanninun Siruthambu which is a collection of 11 Pasurams on his guru Swami Nammazhwar. This is his ONLY contribution to the Nalayira Divya Prabhandham. There are no other works attributed to him. He was elevated to the status of an Azhwar due to his great devotion to his Acharyan who was Swami Nammazhwar, even though he did not perform Mangalasasanam to any Perumal. 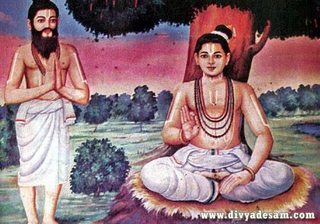 Not the answer you're looking for? Browse other questions tagged alwar .

12
What is the secular account of the compilation of the Alwars' poems?
3
How much does the divinely created statue of Ramanujacharya resemble him?
0
Thief turned into Alwar
7
Is Dramidacharya the same as Thirumazhisai Alwar?
7
What form of Vishnu were the scholars referring to while saying he is adorned with four earrings?