What is the meaning of Shivaaya?

We know Shiva is the Lord. But it is not clear what is meant by Shivaaya ?

My question is : What is the meaning of Shivaaya ?

So the meaning of Śivāya would be to/for Shiva.

Below are the basic details on 8 Vibhaktis:

The below lines of Ram Raksha Stotra have all the Vibhaktis in order:

I worship Rama whose jewel (among kings) who always wins and who is lord of Lakshmi (goddess of wealth)। Through whom the hordes of demons who move at night have been destroyed, I salut that Rama [my salutations to that Rama]।

There is no place of surrender greater than Rama, (and thus) I am servant of Rama।

My mind is totally absorbed in Rama. O Rama, please lift me up (from lower to higher self)॥37॥

We have a lot of meanings from Shiva (sanskrit शिव, IAST: Śiva) in the Vedas, but I will write about the etymology.

The teacher Bal Gangadhar Tilak in 1903 wrote the book "The Arctic Home in the Vedas" (the link to full english book in PDF). In it, he argued that the Vedas could only have been composed in the Arctics, and the Aryans (slavic folks) brought them south after the onset of the last ice age.

Šiwa, Živa, also Živena, Żiwia, Siva, Sieba, is the slavic goddess of life and fertility. She is worshiped throughout what is now Poland, the Czech Republic, Slovakia, and Germany (and especially the Elbe (Labe) river valley), before Christianity expanded into the area. Her name means "living, being, existing".

In India the name Shiva is spoken from a lot of people like Siwa too.

When we would like to translate the word Zhiva (Šiwa / Živa) from slavic language into english then we have this meanings:

This is my knowlege. And I hope it can help someone.

Concept of god Ardhanaareeswara - half men and half woman of god Shiva.

The half-man half-woman Ardhanareeswar represents the union of Shiva and Shakti, the basic tenets of creation, the unchanging Consciousness and Drive that gives motility. 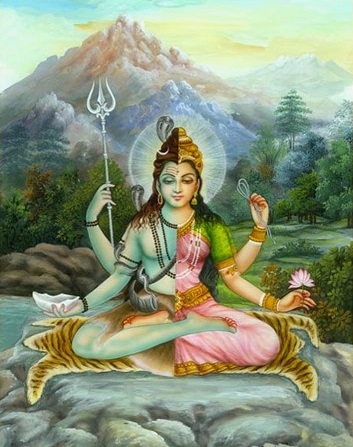 This is Siddhar Sivavakkiyar song about true nature of soul = which is Shiva.

Si va ya here refers to the sound in which your soul is living in the body. Also out of five elements of nature, the fire, air, and space energy's Sound vibration are - SI VA YA (not Shivay). The more you utter the mantra SI VA YA - it directly connects you to spiritual realm of vibrations.

That's why even avvaiyar also said "Those who think of SI VA YA without any deviation, for them no harm is done"

Not the answer you're looking for? Browse other questions tagged shiva name .