What exactly happens at end of Kali Yuga. Will the world be destroyed?

I heard that at the end of the Kali Yuga, the world will be destroyed.

No, the world won't actually get destroyed at the end of the Kali Yuga. Rather, what's going to occur is that when the evil and decadence of the Kali Yuga reaches its zenith, Vishnu will have an incarnation (avatara) as Kalki the horse rider, to kill all the evil people and restore Dharma on earth, commencing a new Satya Yuga. Here is how the Srimad Bhagavatam describes it:

Lord Kalki will appear in the home of the most eminent brāhmaṇa of Śambhala village, the great soul Viṣṇuyaśā. Lord Kalki, the Lord of the universe, will mount His swift horse Devadatta and, sword in hand, travel over the earth exhibiting His eight mystic opulences and eight special qualities of Godhead. Displaying His unequaled effulgence and riding with great speed, He will kill by the millions those thieves who have dared dress as kings.

After all the impostor kings have been killed, the residents of the cities and towns will feel the breezes carrying the most sacred fragrance of the sandalwood paste and other decorations of Lord Vāsudeva, and their minds will thereby become transcendentally pure. When Lord Vāsudeva, the Supreme Personality of Godhead, appears in their hearts in His transcendental form of goodness, the remaining citizens will abundantly repopulate the earth. When the Supreme Lord has appeared on earth as Kalki, the maintainer of religion, Satya-yuga will begin, and human society will bring forth progeny in the mode of goodness. When the moon, the sun and Bṛhaspatī are together in the constellation Karkaṭa, and all three enter simultaneously into the lunar mansion Puṣyā — at that exact moment the age of Satya, or Kṛta, will begin.

So even if some people are killed, the world will still go on after the end of the Kali Yuga. The Satya Yuga, Treta Yuga, Dwapara Yuga, and Kali Yuga keep repeating in a cycle. Now one cycle of all four Yugas is called a Mahayuga or Chatur Yuga, and 1000 Mahayugas make up one Kalpa. A Kalpa constitutes just one day for Brahma the creator god. After the day is over, Brahma goes to sleep, and then the Pralaya, or night of Brahma, commences. The Pralaya, of equal length to a Kalpa, is the time period when the entire three worlds (the physical universe along with Devaloka and Asuraloka) are destroyed by fire emanating from the mouth of Vishnu's serpent Adiseshan. Here is how it's described in the Srimad Bhagavatam:

At the end of the day, under the insignificant portion of the mode of darkness, the powerful manifestation of the universe merges in the darkness of night. By the influence of eternal time, the innumerable living entities remain merged in that dissolution, and everything is silent. When the night of Brahmā ensues, all the three worlds are out of sight, and the sun and the moon are without glare, just as in the due course of an ordinary night.

The devastation takes place due to the fire emanating from the mouth of [Ananta], and thus great sages like Bhṛgu and other inhabitants of Maharloka transport themselves to Janaloka, being distressed by the warmth of the blazing fire which rages through the three worlds below. At the beginning of the devastation all the seas overflow, and hurricane winds blow very violently. Thus the waves of the seas become ferocious, and in no time at all the three worlds are full of water. The Supreme Lord [Vishnu] lies down in the water on the seat of Ananta, with His eyes closed, and the inhabitants of Janaloka offer unto the Lord their glorious prayers with folded hands.

And by the way, all this annihilation is overseen by Shiva god of destruction, who engages in his cosmic Tandava dance in order to direct all this destruction.

After the Pralaya is over, Brahma wakes up and commences the creation of the three worlds again, and thus a new Kalpa begins. Now a Kalpa is already an incredibly long period of time, but it's just one day in the life of Brahma. Now imagine how long a hundred years is in the life of Brahma! That is how long Brahma lives for, and it's called Mahakalpa. And after the Mahakalpa is over, Brahma dies, and then there is a period of even greater destruction, the Mahapralaya, which lasts as long as Mahakalpa. And then Brahma is reborn, marking the start of a new Mahakalpa. And the cycle begins again! 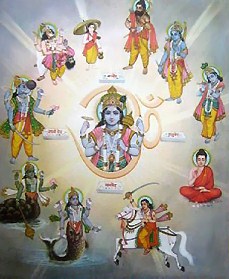 All the four yugas combined together is called a Maha Yuga. One Maha Yuga comprises of 43,20,000 years. 1000 maha yugas are equivalent to the day time of the Brahma. Brahma’s night is also of the same time.

Then mighty clouds will form and the three worlds will be completely flooded with water. Lord Vishnu reposes on the waters in meditative rest for another whole kalpa (4.32 billion years) before renewing the creation.

We are currently in the age of Ascending Dwapara Yuga and not in Kali Yuga. This astonishing revelation was made by Sri Yukteswar Giri(Guru of Paramahansa Yogananda) in his book "The Holy Science" published in 1894.

The 2 Kali Yugas of both descending and ascending arc have passed already.

Most of the people believe that we are in the age of Kali Yuga because of the wrong calculations of certain Sanskrit scholars such as Kulluka Bhatta. That's why the length of the yugas has been widened and that is also the reason why you get wrong figures like 4,32,000 years of Kali Yuga.

I recommend you all to read "The Holy Science" by Sri Yukteswar which in detail explains why we are in Dwapara Yuga and why and how we got the wrong figures which most people believe.

There are 3 gunas or qualities called -Satva, Rajas and Tamas. Entire creation is made up of them only. There are 4 yugas making a cycle, namely Satya Yuga, Treta, Dwapar and Kaliyug. Satya Yuga is dominated by Satva guna that is truth(satya), meditation(tapas), purity(shauch) and worship(bhakti). In treta (3 feets), truth is given up my people because of increased Rajas and left with 3 qualities of Satva. In Dwapar, meditation is also given up by people, leaving dharma standing on 2 qualities and hence called Dwapar(2 feets).

Finally, in kaliyug, purity is also lost under the effect of Tamas, leaving only Bhakti. By the end of Kaliyug, bhakti also vanishes and there is no discipline but chaos. Than Lord Vishnu appears in the form of Kalki and reestablishes the four qualities of Satya yuga, and once again Satya yuga is established. Only adharmis, mlecchas are destroyed, not the universe.

We are currently about 5100 past years within Kaliyuga of 28th chaturyug, 7th manavantar of Varah Kalpa. Prajapati Brahma ji is now about 50 years old and he has remaining more 50x360 approx. kalpas of his life, that is about 18000 more kalpas, where each kalpa has 1000 chaturyugs. 1 chaturyuga = 43,20,000 earth years.

Dwapar Yuga: – There was 1 half virtue & 1 half sin. Normal human stature was 7 cubits. Average human lifespan was 1,000 years.

Kali Yuga: – There is 1 quarter virtue & 3 quarter sin. Normal human stature is 3.5 cubits. Average human lifespan will be 100 years. Towards the end of the Yuga this will come down to 20 years.

In the present days we live in a Kali Yuga, which began at 3102 BCE with the end of the Mahabharata war. This date is also considered by many Hindus to be the day that Krishna left Earth.

There's for sure death and decay at the end of Kaliyuga- which is full of faults, passions, miseries and confusions. This Tamoguna, Rajas once vanished, Sattva gunas can attain peaks giving rise to beings bounded by righteousness- Satyuga begins with the end of the Kali age.

This results in the transformation - end of an Yuga, with rise of consecutive Yuga.

God has supremacy over time, so even time has beginning and end in the form of Yugas(cycle), but God doesn't have such beginning or end. At Mahapralaya, when Mahakaal performs Sanghar tandava along with Mahakali - The kaal and trinity also get merged in Mahakaal, and again creations happen with a new Yuga cycle.

Kaliyuga's end has in store for deaths of all evil doers, who are deprived of Dharmic skills. The remaining balanced people will continue living and sow seeds for the righteousness '(Sat') to rise on the earth.

Previous Yuga, Dwaparyuga ended up with a deadly war amongst brothers. Although Arjuna wanted peace, but saw that all beings are entering into the mouths of time personified avtaar of YOGESHWAR Lord Krishna during the discourse of the holy BHAGWAD GITA.

Arjuna asks the VISHWAROOPAM, who are you, lord answered--

The VISHWAROOPAM said: Kaal(Time) I am, destroyer of the worlds, and I have come to engage all people. With the exception of you [the Pandavas], all the soldiers here on both sides will be slain."

Learning from the past- Dwapara Yuga ended 5117 years ago. Some important events at the end of Dwapara yuga:

Mahabharata war continued for 18 days. All the kings following Adharma were killed in the war. If astronomical calculations are correct, the war ended in September last week of that year.

By the end of Dwaparyuga, Dwaraka gets immeresed in sea. (The remains of dwaraka are still under sea in Gujrat. google for it) By this time Kaliyuga had already started. But by the virtue of Krishna and dharma, helpless new born Kali was not able to show his effect.

In above link, 5 places are mentioned where kaliyuga resides and infects others- destruction of these places is the sign of end of the kaliyuga.

Aging kaliyuga's end might be similar in pattern to that of the past Yugas ends, but different in terms of the outcomes and series of events.

Not the answer you're looking for? Browse other questions tagged yuga time kali-yuga lokas pralaya .

3
Pralaya at end of every Yuga cycle
3
Which Pralaya is the final destruction of the Universe(big crunch)?
0
Is Kali yuga the last yuga of the world?
9
Do Shaivites believe in something greater than Sadashiva?
22
How will we know the end of first part of the Kali yuga?
11
Why do Gaudiya Vaishnavas think the order of the Yugas is Satya, Dwapara, Treta, Kali?
11
Did Vasishta's brother sage Agastya have a previous birth?
5
Contradictory statements in the Bhagavatam and Bhagavad-Gita?
10
How many days are there in one Yuga?
10
Is Life after Moksha possible?
See more linked questions

22
How will we know the end of first part of the Kali yuga?
4
how will Kalki destroy all the bad people at the end of Kali Yuga
2
Kali yuga according to the Mahabaratha
2
What does “Avatar of Kali Yuga” and “Avatar of Dwapara Yuga” mean?
3
What scriptures discuss Krishna's time in relation to the Yuga Sandhi periods?
4
Do the mleccha civilizations become stronger than the vedic civilization in kali yuga?