Who is the mother-in-law of Surya?

I have heard stories of Surya getting married to Vishwakarma's daughter but I don't know the name of Vishwakarma's wife. Who was she and what is her story?

In Vayu Purana - Book 2 -Chapter 22 its mentioned that Virocanā was Praladas daughter and sister of Vairocana (son of Prahlada) was the wife of Tvashta , the next few shlokas also mention Surya getting married to Vishwakarma's daughter Samjana. .

19 Tvastrs wife was the famous daughter of Prahlada and the sister of Virocana and the mother of Trisiras.

Here in above verse its mentioned that very clearly .

21 His younger sister , the daughter of Tvastr (originally) famous by the name of Surenu became the wife of the Sun and is well known as Samjhana.

19 Virocana , famous as the daughter of Prahlada was the wife of Tvastr . She was the sister of Virocana and mother of Trisiras.

Srimad Bhagavata Purana - Skanda 5- Chapter 15- Verse 15 is also giving us the name of wife of Tvasta aka Vishwakarma as Virocana.

Below is screenshot of Vayu purana verses. 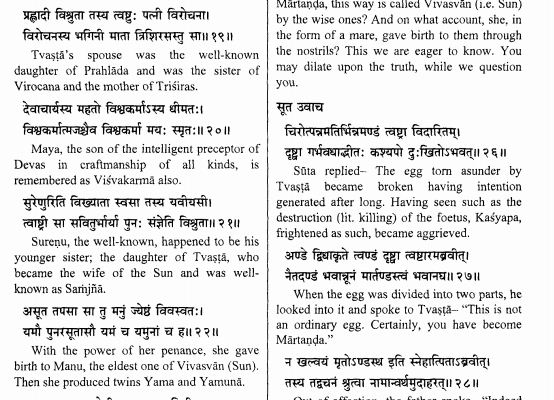 Well not really sure about the story but Viśvakarmā had a wife named Ākṛtī.

From Āṅgirasī, the wife of the Vasu named Vāstu, was born the great architect Viśvakarmā. Viśvakarmā became the husband of Ākṛtī, from whom the Manu named Cākṣuṣa was born. The sons of Manu were known as the Viśvadevas and Sādhyas.

Viśvakarmā (विश्वकर्मा).—A Prajāpati. His daughter Barhiṣmatī was the wife of Priyavrata.1 A son of Vāstu and Āngirasī; wife was Kṛti (Akṛti, Bhāgavata-purāṇa). Father of Manu Cākṣuṣa.2 The divine architect skilled in making weapons. Made vajra of Dadhīci's body and built Indra's abode and erected Sutalam.3 Fought with Maya in Devāsura war. Two more daughters of his were Samjñā and Chāyā who were married to the Sun god.4 Was ordered by Kṛṣṇa to build a city for the Pāṇḍavas;5 built Garuḍa's abode;6 an author on architecture;7 father of four sons; originator of all śilpas, arts and crafts;8 presented Śrī with jewels.

Not the answer you're looking for? Browse other questions tagged surya vishwakarma .

14
What is the story of surya's wives?
10
Did the divine architect Vishwakarma cause the Earth to submerge?
12
Who is Suvarchala? Is she wife or daughter of Sun God?
9
Who did Indra receive a prophecy from in a golden ship?
9
Who is the wife of Prabhas & the mother of Vishwakarma?
12
Why is Surya referred to as Martanda?
6
Who is the daughter of Surya mentioned in Rig Veda 10.85?