Was Maya Danav actually the son of Vishwakarma?

As shared in the answer of a different question I had asked I go to know that the Vayu Puran mentions the following: 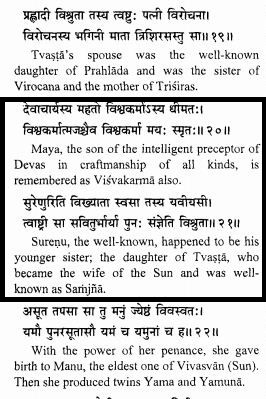 The text says that Surenu, the daughter of Tvastha and wife of Surya was Maya's sister. Does this imply that Maya the architect of Asuras was actually the son of Viswakarma the architect of the gods? Do any other puranas confirm this relationship?

The verses you shared do point to that conclusion but it seems unlikely that Maya Danav would be related to Vishwakarma since he is mentioned in the Mahabharata as a brother of Namuchi, an Asura who was killed by Indra. According to the Khandav Dahan Parva of Mahabharat:

"And it so happened that the slayer of Madhu suddenly beheld an Asura of the name of Maya escaping from the abode of Takshaka. Agni having Vayu for his car-driver, assuming a body with matted locks on head, and roaring like the clouds, pursued the Asura, desirous of consuming him. Beholding the Asura, Vasudeva stood with his weapon upraised, ready to smite him down, seeing the discus uplifted and Agni pursuing from behind to burn him, Maya said 'Run to me, O Arjuna, and protect me!'

Hearing his affrighted voice Arjuna said, 'Fear not!' That voice of Arjuna, O Bharata, seemed to give Maya his life. As the merciful son of Pritha said unto Maya that there was nothing to fear, he of the Dasarha race no longer desired to slay Maya who was the brother of Namuchi, and Agni also burned him not.'

Namuchi is mentioned in many Vedic verses and even the Shatapath Brahmana as having been killed by Indra by using a weapon made of foam. Rig Veda Book 10 Verse 131 mentions:

1 DRIVE all our enemies away, O Indra, the western, mighty Conqueror, and the eastern. Hero, drive off our northern foes and southern, that we in thy wide shelter may be joyful.

2 What then? As men whose fields are full of barley reap the ripe corn removing it in order, So bring the food of those men, bring it hither, who went not to prepare the grass for worship.

3 Men come not with one horse at sacred seasons; thus they obtain no honour in assemblies. Sages desiring herds of kine and horses strengthen the mighty Indra for his friendship.

4 Ye, Aśvins, Lords of Splendour, drank full draughts of grateful Soma juice, And aided Indra in his work with Namuci of Asura birth.

10 Indra, thy laud moves quickly like a joyous wave of water-floods: Bright shine the drops that gladden thee.

11 For thou, O Indra, art the God whom hymns and praises magnify: Thou blessest those who worship thee.

12 Let the two long-maned Bay Steeds bring Indra to drink the Soma juice, The Bountiful to our sacrifice.

13 With waters' foam thou torest off, Indra, the head of Namuci, Subduing all contending hosts.

The Shrimad Bhagvatam mentions Maya Danav at many places:

SB 5.24.9: My dear King, in the imitation heavens known as bila-svarga there is a great demon named Maya Danava, who is an expert artist and architect. He has constructed many brilliantly decorated cities. There are many wonderful houses, walls, gates, assembly houses, temples, yards and temple compounds, as well as many hotels serving as residential quarters for foreigners. The houses for the leaders of these planets are constructed with the most valuable jewels, and they are always crowded with living entities known as Nagas and Asuras, as well as many pigeons, parrots and similar birds. All in all, these imitation heavenly cities are most beautifully situated and attractively decorated.

SB 5.24.16: My dear King, now I shall describe to you the lower planetary systems, one by one, beginning from Atala. In Atala there is a demon, the son of Maya Danava named Bala, who created ninety-six kinds of mystic power. Some so-called yogis and svamis take advantage of this mystic power to cheat people even today. Simply by yawning, the demon Bala created three kinds of women, known as svairini, kamini and pumscali.

In fact in the following excerpt on Lord Shiva's destruction of Tripurasur in Book 7 he is called the greatest of demons:

SB 7.10.52: Maharaja Yudhishthira said: For what reason did the demon Maya Danava vanquish Lord Siva's reputation? How did Lord Krishna save Lord Siva and expand his reputation again? Kindly describe these incidents.

SB 7.10.53: Narada Muni said: When the demigods, who are always powerful by the mercy of Lord Krishna, fought with the asuras, the asuras were defeated, and therefore they took shelter of Maya Danava, the greatest of the demons.

SB 7.10.54-55: Maya Danava, the great leader of the demons, prepared three invisible residences and gave them to the demons. These dwellings resembled airplanes made of gold, silver and iron, and they contained uncommon paraphernalia. My dear King Yudhishthira, because of these three dwellings the commanders of the demons remained invisible to the demigods. Taking advantage of this opportunity, the demons, remembering their former enmity, began to vanquish the three worlds -- the upper, middle and lower planetary systems.

SB 7.10.56: Thereafter, when the demons had begun to destroy the higher planetary systems, the rulers of those planets went to Lord Siva, fully surrendered unto him and said: Dear Lord, we demigods living in the three worlds are about to be vanquished. We are your followers. Kindly save us.

SB 7.10.57: The most powerful and able Lord Siva reassured them and said, "Do not be afraid." He then fixed his arrows to his bow and released them toward the three residences occupied by the demons.

SB 7.10.58: The arrows released by Lord Siva appeared like fiery beams emanating from the sun globe and covered the three residential airplanes, which could then no longer be seen.

SB 7.10.59: Attacked by Lord Siva's golden arrows, all the demoniac inhabitants of those three dwellings lost their lives and fell down. Then the great mystic Maya Danava dropped the demons into a nectarean well that he had created.

SB 7.10.60: When the dead bodies of the demons came in touch with the nectar, their bodies became invincible to thunderbolts. Endowed with great strength, they got up like lightning penetrating clouds.

SB 7.10.61: Seeing Lord Siva very much aggrieved and disappointed, the Supreme Personality of Godhead, Lord Vishnu, considered how to stop this nuisance created by Maya Danava.

SB 7.10.62: Then Lord Brahma became a calf and Lord Vishnu a cow, and at noon they entered the residences and drank all the nectar in the well.

SB 7.10.63: The demons could see the calf and cow, but because of the illusion created by the energy of the Supreme Personality of Godhead, the demons could not forbid them. The great mystic Maya Danava became aware that the calf and cow were drinking the nectar, and he could understand this to be the unseen power of providence. Thus he spoke to the demons, who were grievously lamenting.

SB 7.10.64: Maya Danava said: What has been destined by the Supreme Lord for oneself, for others, or for both oneself and others cannot be undone anywhere or by anyone, whether one be a demigod, a demon, a human being or anyone else.

Since Maya is repeatedly called a Danava or Daitya it would imply that he is a descendant of Danu or Diti whereas Vishwakarma ot Tvashtar is an Aditya (born of Aditi) and therefore his son should therefore belong to the same genealogy rather than of Aditi's sister!

Not the answer you're looking for? Browse other questions tagged vishwakarma tvashtar .

7
Are Vedic Gods Tvashtar And Vishwakarma the same?

10
Did the divine architect Vishwakarma cause the Earth to submerge?
4
Detailed history of Lord Vishwakarma
8
Why did Tvastar, the father of Vritra fashion the Vajra that killed his own son?
7
Are Vedic Gods Tvashtar And Vishwakarma the same?
9
Who is the wife of Prabhas & the mother of Vishwakarma?
4
How was Vishwarupa, the son of Tvashtar related to Asuras?
5
Which scripture mentions Vishwakarma made the idols at Jagannatha?
1
The question is about the timeline of the Mahabharata war in which Krishna summons Vishwakarma…?