I would like to ask if somebody can help in identifying some of Vishnu’s avataras and two figures belonging to Shiva in the attached image. 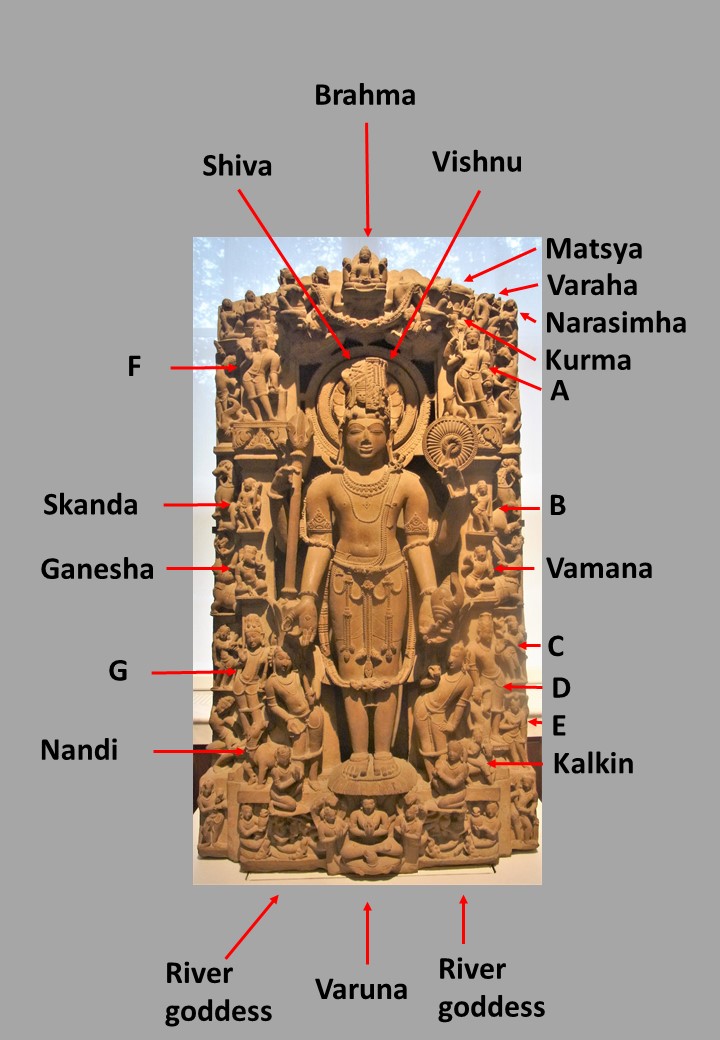 I have indicated in the attachment the obvious avataras and some other figures. Note that Vamana can be identified by an umbrella on his shoulder.

One problem in identifying is that there are 5 figures for those 4 avataras:

On Shiva's side I’m unsure about identifying

Any help would be appreciated.

Update due to answer:

Figure C is Parashurama. I got a clearer image of the same statue. We can see an axe in the hands if we zoom closer. That is between him and D.

Figure A is Kala Bhairava. He is four armed. He holds a trident/spear and a kamandalu in bottom left hand, flower in top right hand and has a dog looking at him. This is a dog and not a bull because in the same image, Nandi is shown larger with a bell in his neck. Dog is smaller than bull. Kala Bhairava is accompanied by a dog. There is another particular aspect in him which is different from others. That is a garland coming from his neck till the knee upto kamandalu. This could be a long ornament (which exactly matches with an image of Kalabhairava or a large snake (Kala Bhairava also wears snakes like Shiva) or normally a garland of skulls.

Figure F is seen with three heads and four arms. I don't think it is a form of Shiva meeting Parvati in Brahmachari form. He holds Vedas in top left hand, flower in top right hand (both are not Vedas as there is a clear difference between the both), a kamandalu in bottom left hand and shows a blessing sign. If he observe closely, he also has a beard too. By these characteristics, I strongly think it is Brahma. This matches with the depiction of Brahma with faces towards different directions with beard, Vedas in hands.

This leaves us with the doubt why Brahma is carved twice once on the top and once on the left. It is highly unlikely that the same deity is carved twice. So, the top one above the face of Harihara is not Brahma. He is Surya, the Sun god. It is a general way of representation to show Surya holding lotuses in the hand, especially in medieval period. There is a relation between lotuses and Sun. Such sculptures are also present in Konark Sun temple also. In the image, Surya is seen sitting in padmasana. There are some images found on the internet where he is seen sitting in this posture on his chariot but with conch and discus in hands. But in this image, I think they are omitted to discriminate him with Lord Vishnu. Sun and Varuna are in the opposite directions. Sun indicates east and Varuna is the guardian of west direction. So, this gives more strength that it is Sun who is in the the top of the sculpture. 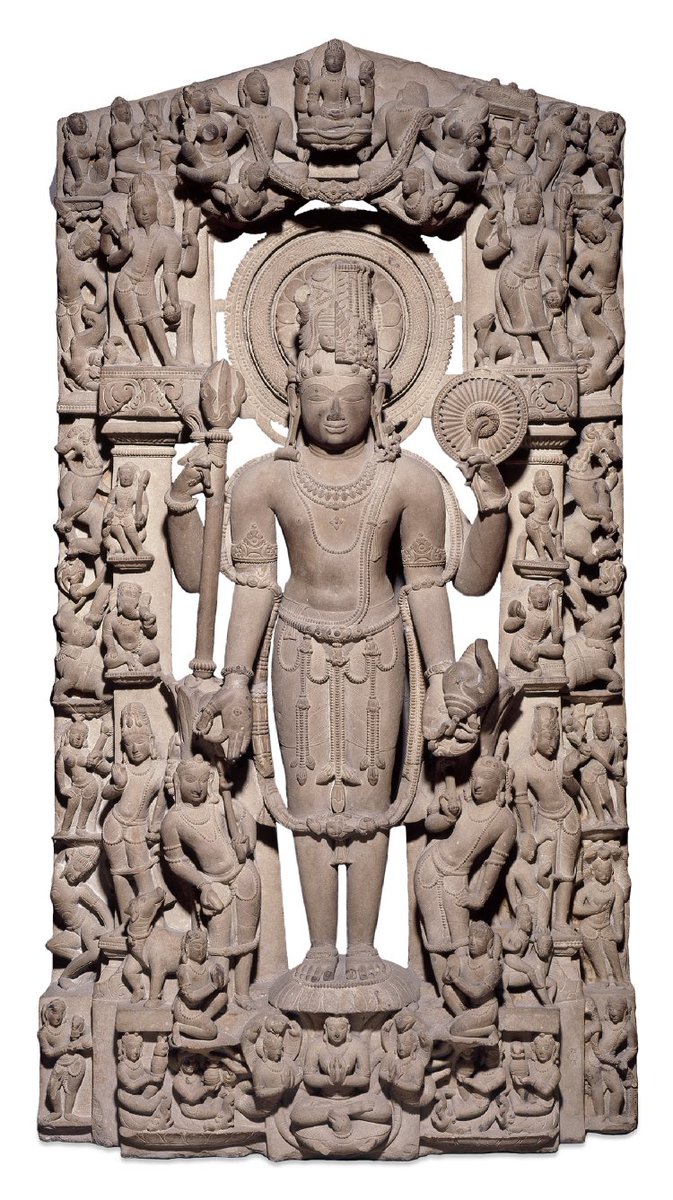 Thanks to all information I got I now identify the detail figures as follows: 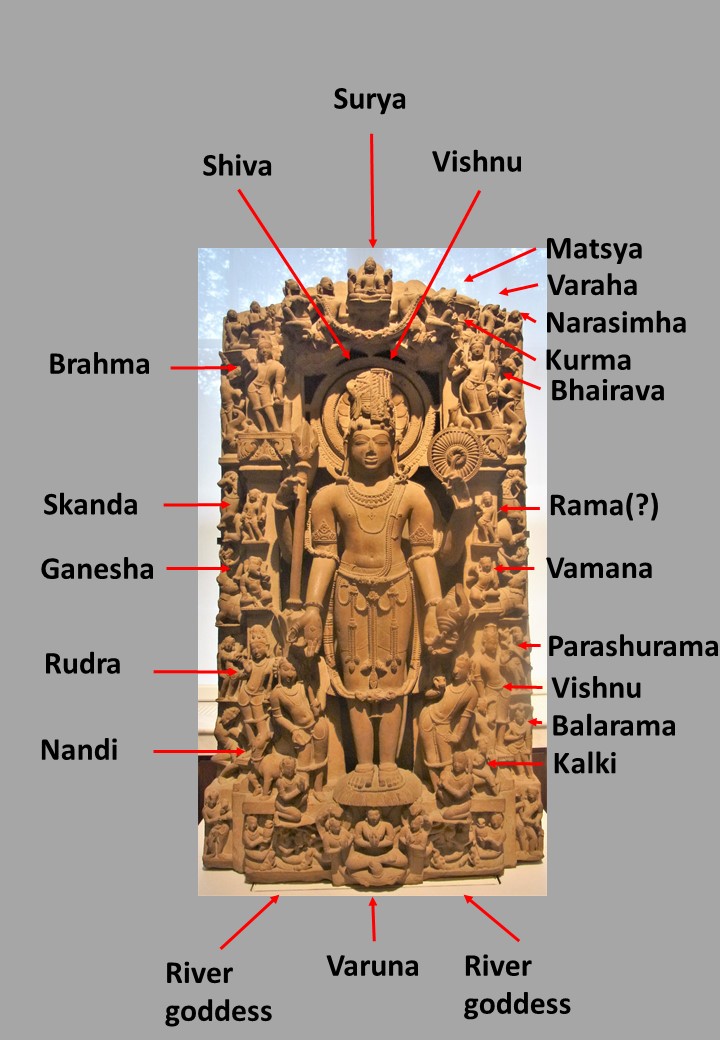 7
Who is Vishnu's wife Nila?
10
Whose marriage happened first, Lord Shiva's or Lord Vishnu's?
7
Does Vishnu's Padma or Lotus flower have a name?
1
Do the long term actions of Avataras survive the end of the respective Avataras?
9
When did Lord Shiva slash Lord Vishnu's head off.?
0
Why Maa Lakshmi says that neither Lord Brahma nor Lord Vishnu only Lord Shiva commands her to move from one place to another.?
0
Mark on Vishnu's chest