The Sangu, or sacred conch shell is very auspicious in Hinduism and is used in many rituals. However, I have heard of a rare Valampuri Sangu which is supposedly even more sacred to use.

What is the Valampuri Sangu and how can I identify it?

What is a Sangu?

When performing Aradhanam for Perumal, it is important to use a Sangu or conch shell to bathe the Vigraham. Sangu are also commonly blown at the beginning and end of Arti in North Indian practice

The conch shell to be used comes from a particular species of sea snail known as Turbinella Pyrum, which can be found exclusively in the waters of the Indian Ocean. It is important that one uses the shell from the correct species, much as one should not use the leaves of another plant in place of Tulasi. 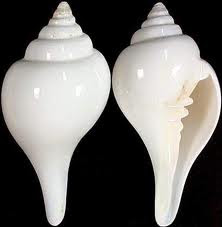 You will notice in the picture above that if one were holding the Sangu with the crown facing upwards, the opening would appear on the right side of the shell. This is called a dextral shell. In very rare cases, approximately 1 in every 100,000, the shell will form with the opening on the left side, known as a sinistral shell. These extremely rare shells are known as Valampuri Sangu, and are considered very auspicious to use, as they are sacred to Lakshmi.

Given how rare the Valampuri Sangu is, many scam artists will attempt to take advantage of buyers by hoarding Sangu to artificially inflate the price, or by falsely selling the shells of a different species as Valampuri Sangu. As a result, one must be especially careful when purchasing Sangu to ensure that one gets the correct species which can be used in worhsip. 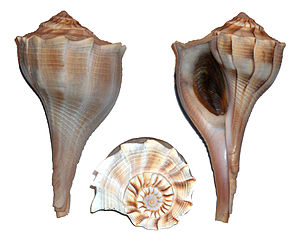 Shown above is the Lightning Whelk (Busycon perversum). This snail is native to Florida and the Caribbean islands. You will notice that it is sinistral, that is the opening is on the left of the shell. In fact, it is extremely rare to find a dextral Lightning Whelk shell.

There are many features which distinguish the correct species Turbinella Pyrum from the Lightning Whelk. By paying attention to these differences, a careful observer can easily identify whether a shell is a true Valampuri Sangu or a fake.

You can even see these differences illustrated in the pictures above. Of course, keep in mind that if it is difficult to tell, it is always better to use a dextral Sangu of the correct species than a sinistral Lightning Whelk.

I agree with the previous statement that the true Valampuri is a sinistral (whorls turning anti-clockwise fashion) variety of the species Turbinella pyrum L. It shows three to seven plaits or folds in the conch cavity (generally three to three and half). The best way is to do X Ray examination of the conch anatomy. It is essential since many fake Valampuri shells are floating in the market made by cut and paste method and then covering skilfully by the conch skin or greenish periostracum. True Valampuri is generally sold on the weight basis. It is charged in the range of Rs. 1500/- to Rs. 3500/- per gram.

Not the answer you're looking for? Browse other questions tagged rituals .

4
How to destroy ego and fear?
3
What is the substitute for sikhA for a sannyAsi who wants to perform Vedic rituals?
3
What is ashtopachara and shodashopachara puja? And how to do it?
12
What is the difference between Rajasuya Yajna and Ashwamedha Yajna?
3
Have the Baudhayana Grihya Sutras ever been translated into English?
2
What are the counter-arguments within Hinduism against the Satī (sahamaraṇa) system?