What is the significance of Apana Mudra?

What does Apana Mudra signify or how is it important? When in Bhava Samadhi, Sri Ramakrishna Paramahamsa was often found in the same Mudra. 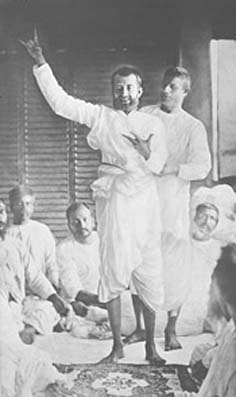 Mahavatar Babaji taught the importance of this Mudra to his disciple Rajinikanth who made it his party symbol. 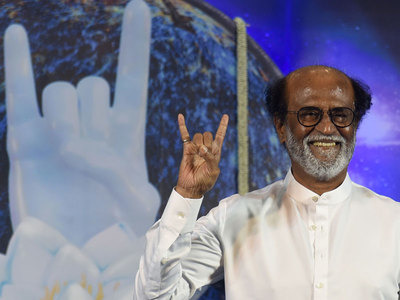 There are a lot of other Mudras as well but this Mudra being used by spiritual giants like Sri Ramakrishna and Mahavatar Babaji, must hold a special significance. What is it?

First of all the MudrA in the images is not ApAna MudrA at all. It is something else.

ApAna MudrA is formed when the middle, ring fingers and the thumb are conjoined at their tips.

There are the 5 principle Vayus viz - PrAna, ApAna, VyAna, UdAna and SamAna and we have 5 corresponding MudrAs too for each one of them. These MudrAs are used during doing Naivedyam to Gods. They are part of the GrAsa MudrAs. So, descriptions of how to form these Mudras are found in several Tantras.

The five VAyus are - PrAna, apAna, SamAna, UdAna and VyAna.Among these five, know SamAna to be the fith one. When offering oblations in PrAna VAyu, the PrAna MudrA is prescribed. When index finger, middle finger and the thumb are conjoined then PrAnamudrA is formed. When the ring finger, middle finger and the thumb are likewise joined then the ApAna MudrA is formed and in ApAna-oblations this MudrA is to be used ......

These MudrAs are also described in the book Nityotsava which quotes from another Tantra and there the description of the ApAna MudrA is different from the one given above. But, at the same time it does not match with the images found in the question too.

SwAmi RAmadev's book Yoga SAdhanA also has pictorial descriptions of this and other MudrAs. See the pic given below (the one in the middle is the ApAna MudrA):

From, Upanishads, Tantras we get to know that there are certain working areas for each of these VAyus. For, ApAna Vayu, this area is Guhya or anus. So, it is basically related to excretion.

According to the book Yoga SAdhanA, the following are the benefits of performing ApAna MudrA:

By performing this MudrA, the toxins are removed from the body. It helps in curing constipation, gaseous troubles, diabetes, kidney problems and tooth problems. It is generally very good for all bowel problems. It also helps in heart problems and creates sweating.

What RajnikAnt is doing is probably showing a sign of assurance or victory to his followers. And, what Sri RAmkrishna was doing will be better known only to him because, as is said,he was in a state of SamAdhi when that pic was taken. Also, note that his left hand is in some other MudrA. But, in ApAna MudrA both hands should be in the same posture.

So, the conclusions here are:

Not the answer you're looking for? Browse other questions tagged mudra .

3
I am looking for an accurate pictorial description of the so called Gokarna Mudra
6
Is there hasta khechari mudrA?
7
Scripture for Ashwini Mudra
2
Can someone explain this Mudra being done by Ramakrishna Paramhansa in Samadhi?