Can a god have an Avatar of an Avatar?

Shrinathji is a form of Hindu god Krishna, manifest as a seven-year-old child (Balak).

Here, they have used form to describe it but I think that means an avatar or am taking it wrongly?

Shrinathji is not an incarnation (avatara) of Krishna, he's just Krishna himself. The Srinathji idol depicts Krishna as a child holding the Govardhana hill, which is why his hand is raised as you can see in the image below. Krishna didn't incarnate as some other individual to lift the hill, he lifted it himself. So it makes no sense to call Shrinathji an incarnation of Krishna. 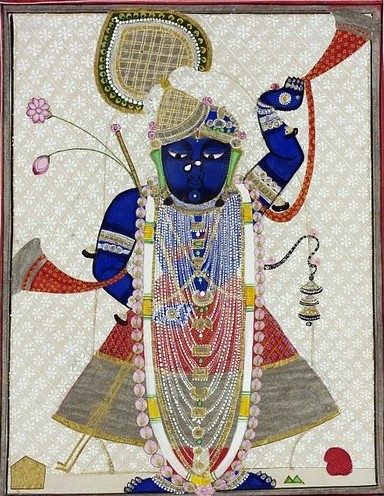 Keeping that in mind, here are some examples of people who were an "incarnation of an incarnation" of some god:

Not the answer you're looking for? Browse other questions tagged krishna gods temple avatars .

7
When lord Krishna takes the form of Shreenathaji?
19
What is the story of Sharaba?
13
Is Balarama an Avatar of Vishnu or Adiseshan (or both)?
17
What scriptures discuss Ghandaberunda, the bird beast created by Narasimha?
7
Do Vallabhacharya's followers believe he was originally a Gaudiya Vaishnava?
10
What surviving works of the Rudra Sampradayam are there before Vallabhacharya?
7
Who is sage Jalabimba and what is his connection to Vishnuswami and the Rudra Sampradayam?
2
What are the words of the Brahmasambandha Mantra of Pushti Marga?

28
Partial and full incarnations: When divine beings incarnate on earth, do they continue to exist in their original abode?
7
Why does Periyalwar say that Krishna was born in Thirukottiyur rather than Mathura?
20
Why did Lord Shiva take 44 avatars if his primary role is to be the destroyer?
8
Who are these goddesses?
1
Why Kalki Avatar will come at the end of the yuga not in between like all other Avatars of Vishnu?
6
Can Sri Krishna be called 'a person'?
3
Can I worship Krishna to fullfill my material desires?