belief death sin
Share
Improve this question
edited May 3 '18 at 16:07 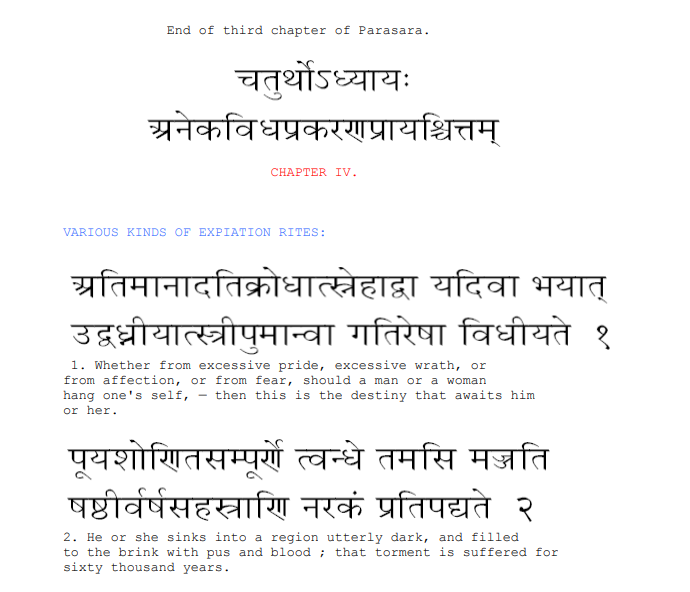 While the other answers suggest it is bad, it cannot be too bad, because Rama and/or Lakshmana ponder doing it in the Garuda Purana and they are supposed to be righteous.

While there, Rama entered into a friendly compact with Sugriva, the brother of the monkey-king Vali, and showed his skill in archery by shooting through the trunks of seven Tala trees. Then he killed Vali and made over the sovereignity of the monkey-land Kishkinda to his brother Sugriva, and quartered himself with his beloved Lakshmana in the outskirts of the Mount Rishyamukha. Then Sugriva commissioned the leaders of his monkey-troops to search for Sita in all directions, and the huge monkey-generals, with their bodies mountain high, went out north, south, east and west in quest of the sunny bride of the solar race. In vain did they search every stream or river bank, hill or dale, forest or hamlet, and at last while deliberating suicide in despair, they saw Shampati.

Now it makes no sense whatsoever for the Vanaras to ponder suicide over some people they barely know, so Rama and/or Lakshmana have to do it.

Also while another answer by Pradip Gangopadhyay presumably correctly points out some rites for people who die by suicide are left out, or are pointless if performed, the Garuda Purana actually gives the responsibility of the last rites of suicide victims to pilgrims.

Brahma said:—Then having performed a ceremonial ablution with the Varunastra Mantra, the pilgrim should offer obsequious cakes to his departed manes at the sanctuary of the hill of spirits (Pretashila) and invoke them as follows:

I offer this cake to the souls of those who have committed suicide or met a violent death either by water, poison, blow, or strangulation.

Thus suicide is not ideal, but seemingly if there is enough reason to do it, just accepting the consequences seems reasonable.

2
What is the view of Vedanta on rebirth after dying by suicide?
5
Did Mother Sati become a ghost after committing sucide?
13
How to reconcile prāyaścitta (expiation) involving death with suicide (itself a big sin)?
2
Why is suicide criticized in scriptures when it is part of the prarabdha?