What is the symbolic meaning behind the siva-sakthi triangle? 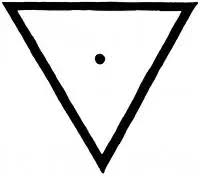 What is the symbolic meaning behind the siva-sakthi triangle?

I know there are several variations of symbols that can represent her, but what does this upside-down triangle with the dot in the middle mean specifically?

The representation of universe is depicted in Sri chakra. It has a geometric configuration which includes triangles and circles giving rise to complex sub shapes.

The innermost bindu or dot is the undifferentiated union of two eternal principles viz. Shiva and Shakti. When pulsation occurs in bindu then it gives rise to triangles which are upward facing and downward facing triangles.

Bindu, also called Sarvanandamaya (all blissful), and represents the transcendental power (Para Shakthi) and absolute harmony (saamarasya) between Shiva and Shakthi. This is equivalent to what the Vedanta calls the Brahman. Owing to the power of the will (icchha shakthi) there comes about an apparent differentiation of Shakthi from Shiva, expressed in the form of triangle.  Here again, the triangle is the expansion of the Bindu (bindu vikasana).

There are multiple esoteric meanings of these sacred geometry which is venerated during upasana by a sadhaka after initiation.

Not the answer you're looking for? Browse other questions tagged shiva symbolism shakti .

10
What is the symbolic meaning behind Lord Shiva sitting in snow clad mountain Kailasa?
6
What is the origin of Namaskar? What does it signify?
3
What are vibrations?
6
Legend behind origin of Vayu Lingam in Srikalahasti and its meaning
4
What are the symbolisms behind Lord Shiva speaking tantras and agamas to Devi?
3
What are different symbolic representations behind lingam?