Where can I find side by side compilation of Vedanta Sutras and the corresponding verses from Srimad Bhagavatam?

Govinda Bhasya is the commentary of Baladeva Vidyabhusana on Vedanta Sutras. This commentary is also in the similar style as previous acharyas of other schools.

Is there any work which shows corresponding Bhagavatam verses to each Vedanta Sutra?

As far as I know, there is no ancient work that has corresponding verses of Bhagavatam mapped to each Vedanta Sutra. Jiva Goswami did that to an extent in his sandarbhas but that is only in spirit not verse by verse. He explained first 5 Vedanta Sutras using first verse of bhagavatam, but others are scattered.

There are two modern works(20th century) however by Haridasa Shastri and Ramapada Chattopadhyaya.

This is Govinda Bhasya commentary by Baladeva Vidyabhusana in Sanskrit and at the end of each Vedanta Sutra, Bhagavatam verse numbers are added based on works of Haridasa Shastri and Ramapada Chattapadhyaya.

This is what Jiva Goswami says in Tattva sandarbha, text 21:

Garuḍa Purāṇa says:(quoted by Madhva in his commentary on SB 1.1.1)

This work is most complete. It expresses the meaning of the Brahma-sūtras and Mahābhārata. It is the explanation of gāyatrī and reinforces the meaning of the Vedas. It is the Sāma Veda among the Purāṇas and has arisen directly from the Lord. It has twelve volumes and hundred divisions. It has eighteen thousand verses. It is called Śrīmad-bhāgavatam.

What he says is that modern commentators on Vedanta will be taken seriously to the extent they agree with Bhagavata conclusions.

Here are some things he explained on the basis of first verse of Bhagavatam.

The correlation between first 5 sutras of Brahma Sutras and first verse of Bhagavata. 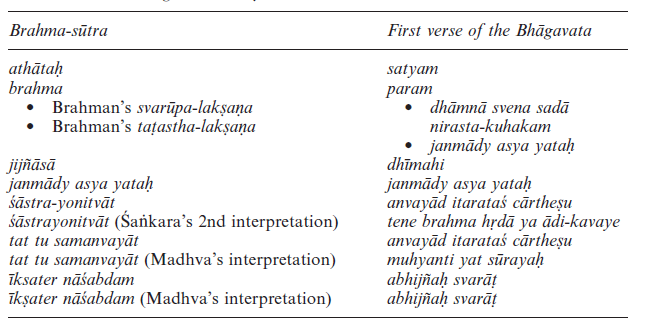 Vedantic discussions based on first verse of Bhagavatam: 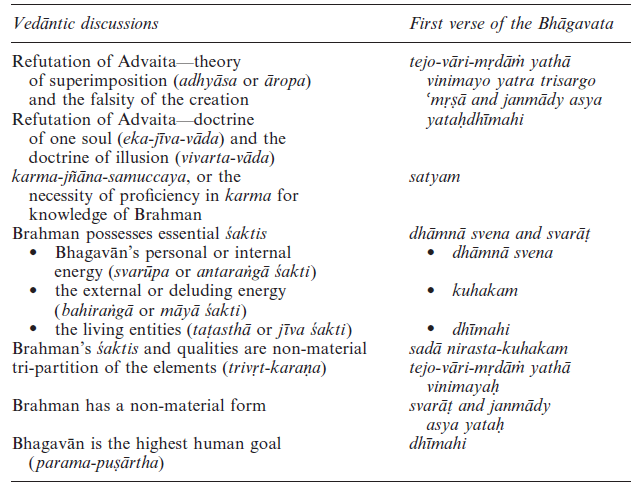 Correlation between Upanishadic passage and first verse of Bhagavatam: 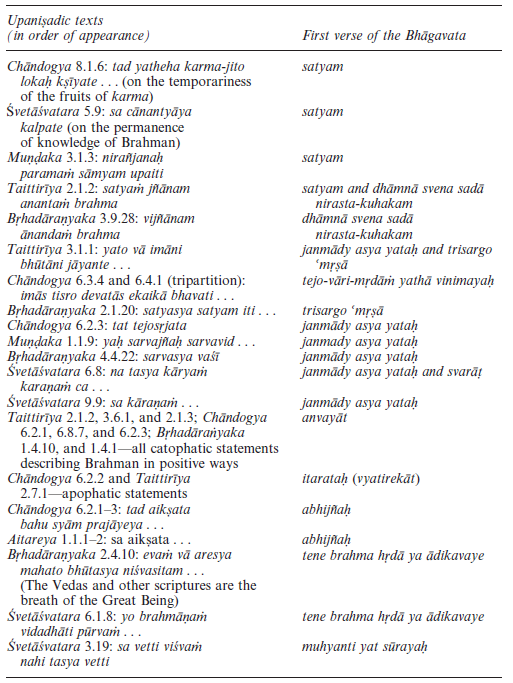 The correlation between Brahma Gayatri and first verse of Bhagavatam:

The correlation between names of chapters of Brahma Sutra and first verse of Bhagavatam:

This discussion he does at the end of Paramatma Sandarbha, apart from that he doesn't enter into Vedanta discussion.

As the other user pointed out, there are modern works however which try to correlate Bhagavatam verses with Vedanta Sutras based on Govinda Bhasya of Baladeva Vidyabhusana.

Śrī Caitanya Mahāprabhu had explained that the Śrīmad Bhāgavatam is the natural commentary of the Vedanta-sūtras. But he had not explained how individual verses of the two scriptures related to each other. Sri Haridas Shastri addressed this key gap in the Gauḍīyā Vaiṣṇava literature, by writing and publishing his book Vedānta- darśanam.[6] This book explains how a verse or verses of the Śrīmad Bhāgavatam comment on a specific Vedanta-sūtra. This work is exceptional in its scholarship, and was honored with an award by the Nāgarī Pracāriṇī Sabhā of Benares

Vedanta Darshanam (Bhagavata Bhashyopetam) can be read in Hindi here

7
On what basis is Krishna claimed to be source of Vishnu?