On what basis are puranas named?

There are puranas like Brahma purana, Skanda purana, Shiva Purana, Garuda purana. On what basis are these names given to the puranas? Is it that the puranas talk about some god or is that some god spoke particular purana or any other?

How exactly were puranas named?

The Puranas are named according to following points (these are my observations):

The complete list of Puranas and why they are named so is given in Shiva Purana, Uma Sanhita, Chapter 44.

But please note that there is some contradiction on Bhagavata Purana, as you can see Shiva Purana said it is Devi Bhagavata but in Vishnu Purana preface, section 5, it is said to be Shrimad Bhagavata Purana.

It is named Bhágavata from its being dedicated to the glorification of Bhagavat or Vishńu.

I read in Tattva Sandarbha by Jiva Goswami(verse 15) that:

And the names "Skanda","Agneya",etc. (by which the various Puranas are known) refer either to those who first declared them, as is the case with the Kathaka etc, or to those who rearranged them. Therefore, if one sometimes hears (the Puranas) spoken of as non-eternal, it is merely with reference to the fact that they are sometimes manifest and sometimes unmanifest.

The above seems one convention in naming though not always true.

Shiva Purana is spoken by Lord Shiva as well as it contains glories of Lord Shiva.

Bhavisya Purana is spoken by Lord Bhava(Shiva), but I am not sure whether it gets the name because of that or because it speaks about future.

Padma purana seems to get the name because it speaks of Padma Kalpa events.

There are various ways people interpret Srimad Bhagavatam( The beautiful story of God, devoted to god etc.) spoken by Sukadeva

Brahmanda is that in which Lord Brahma described greatness of universe. 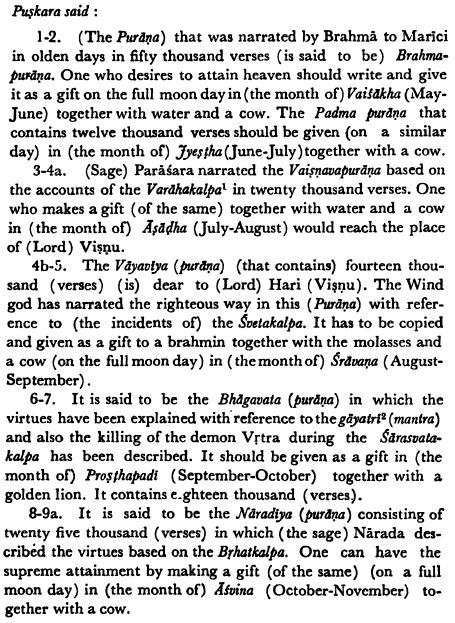 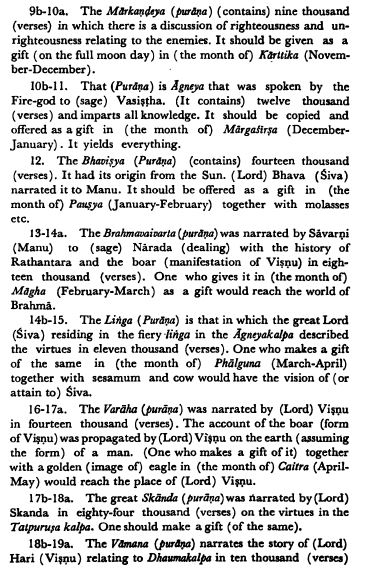 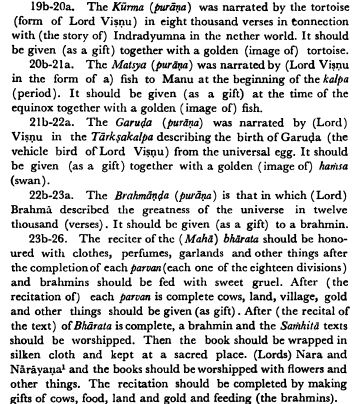 In the KulArnava Tantra's (KT) 17th Chapter, Lord Shiva gives interesting etymological derivations (why the texts are so-named) for both the words - PurAna and ItihAsa.

Because it narrates of approved (Ista), Dharma etc.,breaks the darkness (timira) of ignorance, and removes (haranAt sarva), all miseries, it is called ItihAsa.

For PurAna, the definition is the following:

Because it tells the merit of merit and demerit (punyapApa), because it dispels evil beings like RakshAsas, and because it generates nine-fold devotion (Navavidha Bhakti), and the like, it is called PurAna.

These are usually spoken only in relevance to Vishnu.

And, that's possibly why PurAnas have (apparently) given more importance to Vishnu and Bhakti.

15
What is the meaning of Ramayana?
9
How the original name of "Jai Samhita" changed to "Mahabharat"?

26
Complete English translations of Puranas
9
Classification of Mahapuranas on the three Gunas Sat, Rajas and Tamas
3
On what basis Vedas, Upanishads etc. are named?
6
Does the Skanda Purana classify Puranas into Sattva and Tamas?
3
The need for Puranas and Upanishads