Why do Vedas have śākhās? Are all of them apauruṣeyā?

This table lists the Vedas and their extant śākhās under the Saṃhitā column. My question has to do with the śākhās. 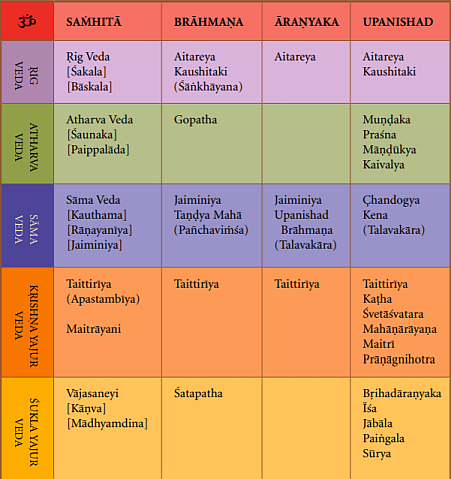 Note that the bracketed terms in the Saṃhitā column are names of the different śākhās, which are versions or recensions of the same texts. Terms in parenthesis indicate synonymous titles.
Source: hinduismtoday.com

What is the need for Vedas to have śākhās? Why isn't there just one true copy/branch for each of the four Vedas?

Were the śākhās created by their founder sages because the Vedas were revealed to them a little differently?

Do followers of each śākhā believe their version to be the true copy/revelation? If yes, does it make all Vedas of all śākhās apauruṣeyā (authorless)?

Now this chapter of the book Hindu Dharma: The Universal Way of Life says:

Krsna Dvaipayana came to be called "Vedavyasa" for having divided the Vedas into four and then having subdivided them into 1,180 recensions. "Vyasa" literally means an "essay" or a "composition". Classifying objects is also known as "vyasa".

Is the claim that Kṛṣṇa Dvaipāyana himself divide the four Vedas into various śākhās true? If yes, why did he divide them further?

Q-2. why did he divide them further?

It's explained at Sakhas now Studied!:

Krsna Dvaipayana knew all the 1, 180 sakhas( recensions) of the Vedas revealed to the world by various sages. They were mingled together in one great stream. Being remarkably gifted, our ancestors could memorise all of them. For the benefit of weaker people like us, Vyasa divided them into four Vedas and subdivided each into sakhas. It was like damming a river and taking the water through various canals....

Considering that people in the age of Kali would be inferior to their forefathers, Krsna Dvaipayana thought that it should be sufficient for them to learn one sakha of any one of the four Vedas. It was the Lord that put this idea into his head....

According to Krsna Dvaipayana's arrangement, though it is obligatory for a person [ that is a Brahmin] to learn only one recension, it does not mean that there is a bar on learning more. The intention is that at least one sakha must be studied. Even after Vyasa's time, there have been examples of panditas mastering more than one sakha from the four Vedas....

We have scriptural base for the claim:

Q-1. Is the claim that Kṛṣṇa Dvaipāyana himself divide the four Vedas into various śākhās true?

Yes, according to Srimad Bhagavata Mahapurana that Vedavyasa divided Vedas and his Shishyas further divided them into various Shakhas. You can read further verses of Srimad Bhagvatam to that followed by I mentioned in this answer i.e. 12.6.52 to 12.6.60 and 12.6.74 to 12.7.4

I could have quoted the text of above mentioned verses as it is but I thought it would be better if it's graphically represented. So, I've prepared tree/structure charts narrating division for each of Veda:

Division of Veda into four: 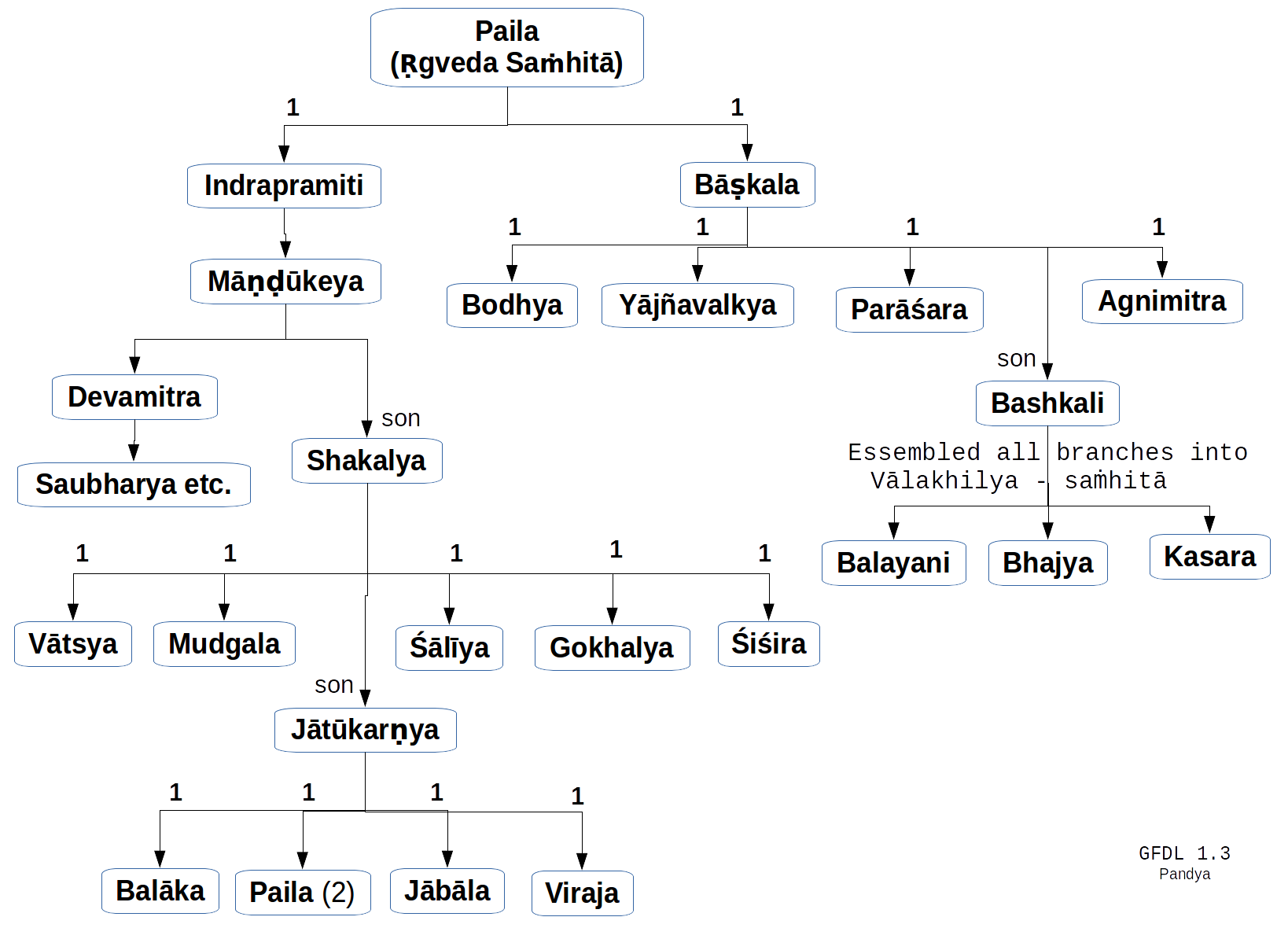 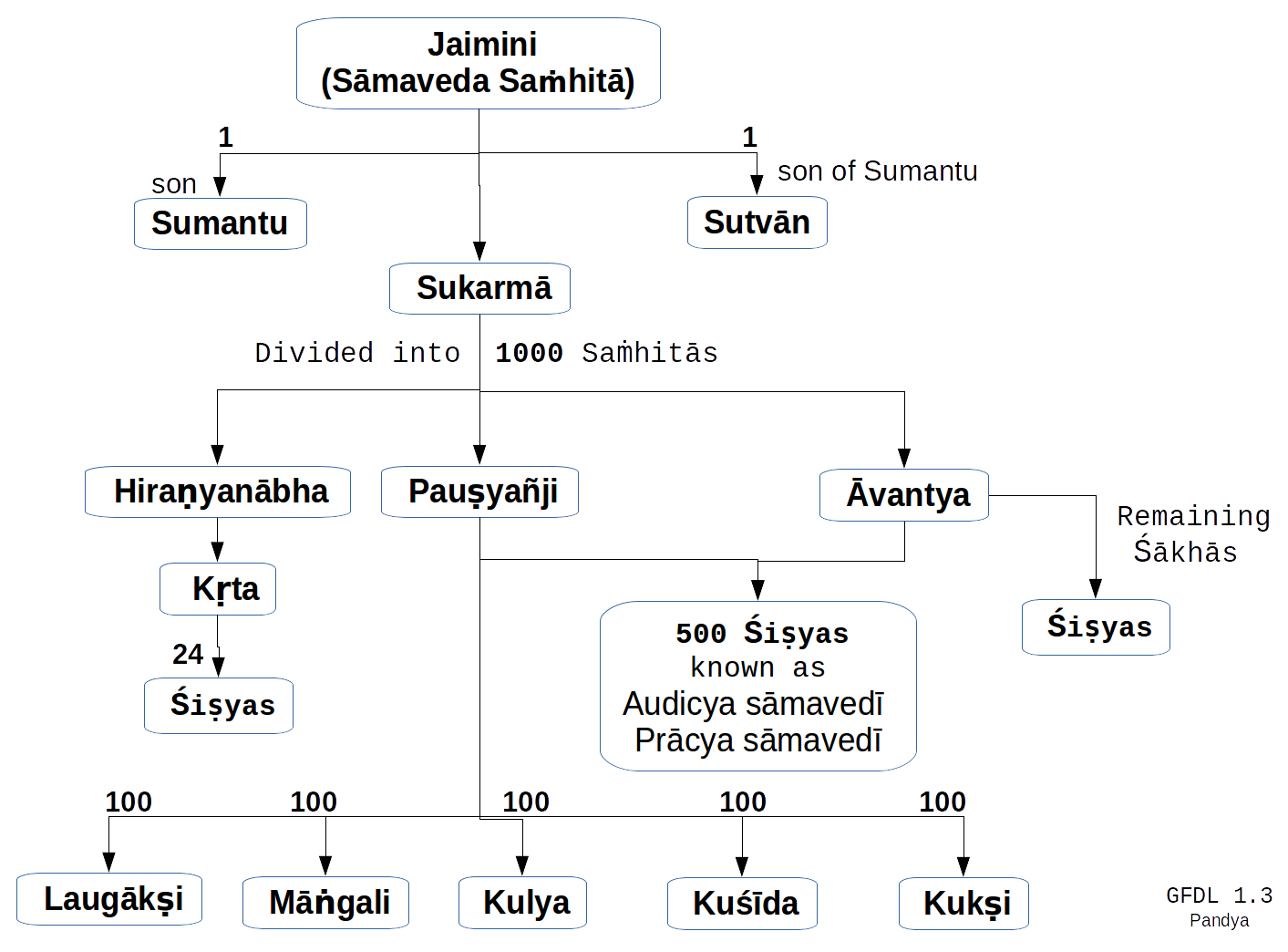 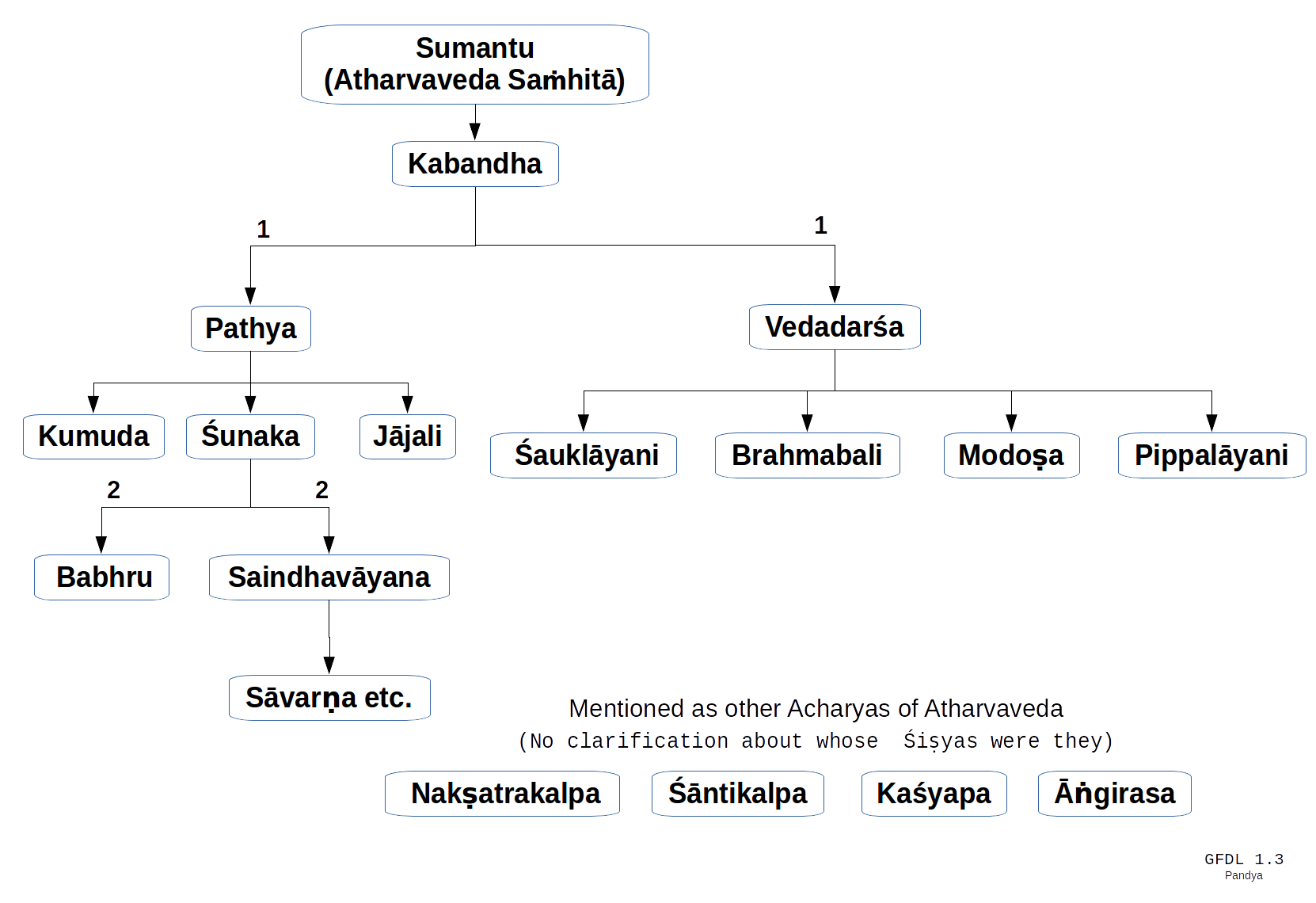 Note: Whenever there is explicit mention of division of Samhitas into number of Shakas, number are mentioned. You may click on image to magnify; created using LibreOffice Draw; maintained IAST.

Vedic mantras, or the words of the Vedas, are traditionally understood to be infinite and endless, meaning that there are an innumerable number of Vedic mantras.

Some of these mantras, from the infinite set of mantras, are revealed to Rishis.

Vedic mantras are of 3 types: Rk, Yajus, or Saman.

The Purva Mimamsa Sutras give a definition for each type of mantra.

The Atharva Veda actually consists of a combination of all 3 mantra types. There is no mantra type "Atharva."

Why did the one Veda split into four?

Text 46: In this way, throughout the cycles of four ages, generation after generation of disciples — all firmly fixed in their spiritual vows — have received these Vedas by disciplic succession. At the end of each Dvāpara-yuga the Vedas are edited into separate divisions by eminent sages.

Text 47: Observing that people in general were diminished in their life span, strength and intelligence by the influence of time, great sages took inspiration from the Personality of Godhead sitting within their hearts and systematically divided the Vedas.... In this form, named Kṛṣṇa Dvaipāyana Vyāsa, he divided the one Veda into four.

Text 50: Śrīla Vyāsadeva separated the mantras of the Ṛg, Atharva, Yajur and Sāma Vedas into four divisions, just as one sorts out a mixed collection of jewels into piles. Thus he composed four distinct Vedic literatures.

Why do different Shakhas (recensions) exist for each Veda?

The reason is because Vedavyasa taught his sishyas each Veda, and each sishya further taught only a part of the Veda to his sishyas. For example, assuming I have 1000 Rk mantras, I will teach 500 of those 1000 mantras to one disciple, and the other 500 to another. Now, you have 2 Shakhas of the Rig veda, named after each Rishi or sishya who learned and propagated the recension he learned.

So, a Shakha is a part of the mantras of a revealed Veda.

Text 51: The most powerful and intelligent Vyāsadeva called four of his disciples, O brāhmaṇa, and entrusted to each of them one of these four saṁhitās.

Texts 52-53: Śrīla Vyāsadeva taught the first saṁhitā, the Ṛg Veda, to Paila and gave this collection the name Bahvṛca. To the sage Vaiśampāyana he spoke the collection of Yajur mantras named Nigada. He taught the Sāma Veda mantras, designated as the Chandoga-saṁhitā, to Jaimini, and he spoke the Atharva Veda to his dear disciple Sumantu.

Text 60: Thus these various saṁhitās of the Ṛg Veda were maintained through disciplic succession by these saintly brāhmaṇas

Texts 64-65: Yājñavalkya, the son of Devarāta, then vomited the mantras of the Yajur Veda and went away from there. The assembled disciples, looking greedily upon these yajur hymns, assumed the form of partridges and picked them all up. These divisions of the Yajur Veda therefore became known as the most beautiful Taittirīya-saṁhitā, the hymns collected by partridges [tittirāḥ].

Text 74: From these countless hundreds of mantras of the Yajur Veda, the powerful sage compiled fifteen new branches of Vedic literature. These became known as the Vājasaneyi-saṁhitā because they were produced from the hairs of the horse’s mane, and they were accepted in disciplic succession by the followers of Kāṇva, Mādhyandina and other ṛṣis.

Text 75: Jaimini Ṛṣi, the authority of the Sāma Veda, had a son named Sumantu, and the son of Sumantu was Sutvān. The sage Jaimini spoke to each of them a different part of the Sāma-veda-saṁhitā.

Texts 76-77: Sukarmā, another disciple of Jaimini, was a great scholar. He divided the mighty tree of the Sāma Veda into one thousand saṁhitās. Then, O brāhmaṇa, three disciples of Sukarmā — Hiraṇyanābha, the son of Kuśala; Pauṣyañji; and Āvantya, who was very advanced in spiritual realization — took charge of the sāma-mantras.

Text 1: Sūta Gosvāmī said: Sumantu Ṛṣi, the authority on the Atharva Veda, taught his saṁhitā to his disciple Kabandha, who in turn spoke it to Pathya and Vedadarśa.

Not the answer you're looking for? Browse other questions tagged vedas history tradition vyasa recension .

7
When were the Vedas classified into four?
11
Are there any Variants in Samhita of Vedas?
6
Is Baskala Shaka of Rig veda Authentic?
7
What is the meaning of Katha(कठ) in Katha Upanishad?
5
Where in the Rig Veda are the 10 Upanishads?
8
Was Shukla Yajurveda unknown to Vedavyasa?
6
How to reconcile mention of word Taittiriya in Ramayana?
2
Does apauruṣeyā mean truly authorless or simply 'no human author'? Or do different schools of philosophy interpret the word differently?

28
Why do the Vedas need to be recompiled every Dvāpara Yuga?
11
Do the Brahmanas of the Rig Veda mention Brahma and Vishnu's contest?
16
Are Upanishad's really parts of the Vedas?
7
Was the Atharva Veda compiled at the time of King Parikshit?
3
Did Ramanujacharya or Nimbarkacharya meet Vyasa?
4
Which lines of Mahābhāṣya of Patañjali say that Vedas had 1131 śākhās (recensions)?
6
Why aren't all works whose authors are not known regarded as authorless (apauruṣeyā)?