What is the secular account of the compilation of the Alwars' poems?

The Alwars (also spelled Azhwars) are a group of 12 ancient Vaishnava saints who lived in Tamil Nadu and are famous for their poetry in praise of Vishnu. The 4000 verses of the Alwars were compiled by the Vaishnava Acharya Nathamuni into a book called the Naalayira Divya Prabhandam, which is considered by many to be the "Dravida Veda", or South Indian Veda. The Alwars are crucially important figures in the history of Vaishnavism; it's the principles and beliefs embodied in the Alwars' poems which Nathamuni used to found what we now call the Sri Vaishnava sect of Hinduism (of which I'm a member).

But I'm interested in how Nathamuni compiled the Alwars' poems into the Naalayira Divya Prabhandam. As I understand it, the traditional account goes roughly as follows. (This is what is presented, e.g. in this Wikipedia page.) Long after the time of the Alwars, almost all their poetry had been lost. Then one day Nathamuni, while on a religious pilgrimage, heard someone reciting a poem of an Alwar named Nammalwar, AKA Sadagopan, in praise of the deity of the Sarangapani Vishnu Temple. Now Nammalwar had spent his life under a tamarind tree in the town of Kurugur, but he still managed to write such vivid poetry about many of the sacred places of Vishnu. Nathamuni was spell-bound by the beauty of the poem, which you can read here, and then he heard the last verse:

Sadagopan of Kurugur has caught hold of The Lotus Feet of Krishna, (who sucked the life of Putana, the Rakshasa, along with her breast milk, who came in the guise of a lady to offer the infant Krishna her poisonous breast milk to kill Him) and sung thousand verses about Krishna, which are sweeter than the music of flute; out of those 1000, the readers of these ten are so dear and sweet to Vaishnavas.

Nathamuni was so captivated by this single poem of Nammalwar that he wanted to hear the other 990 verses, but the person who recited the poem didn't know any more verses, or whether any other verses even existed. Nathamuni didn't know how to obtain the other verses, but then he remembered that the lazt verse said that the author was "Sadagopan of Kurugur", so he decided to go to the town of Kurugur in the hope of learning more of the poems

The people of Kurugur told Nathamuni that there was a poet named Nammalwar who lived there, but the townspeople had thrown the scroll containing his poetry into the river out of a misplaced fear that Nammalwar's poetry would lead people astray from the teachings of the Vedas. Nathamuni was distraught, but then someone in the town taught him a poem by another Alwar, named Madhurakavi Alwar, who was a student of Nammalwar. Madhurakavi Alwar's poem, which you can read here, is not about Vishnu like most of the Alwars' poems, but rather in praise of his guru Nammalwar. So Nathamuni went to the Tamarind tree, under which Nammalwar had spent his life, and he recited Madhurakavi Alwar's poem 12000 times! Finally Nammalwar appeared before Nathamuni, and taught him the 1000 verses of Nammalwar, the 3000 verses of the other 11 Alwars, and other philosophical teachings. That, according to traditional accounts, is how Nathamuni acquired the 4000 verses of the Alwars, which he compiled in the Naalayira Divya Prabhandam.

But my question is, are there any secular accounts of how Nathamuni compiled the poems of the Alwars? Western Indologists, for instance, presumably don't believe that Nathamuni acquired them by magic, so what do they think he did? Sri Vaishnavas consider Nammalwar to be the guru of Nathamuni, since Nammalwar appeared before him and taught him so much. Do Western Indologists believe that Nathamuni was a contemporary of Nammalwar, and that Nammalwar was Nathamuni's literal guru? Do they think he learned all 4000 verses of the Alwars from Nammalwar, or do they think that he got the poems from many different people, akin to how Vyasa compiled the Vedas from many different sages?

are there any secular accounts of how Nathamuni compiled the poems of the Alwars? Western Indologists, for instance, presumably don't believe that Nathamuni acquired them by magic, so what do they think he did?

The academic / western scholarly opinion is that Nathamuni was an immigrant to South India from North India and spent a lot of time mingling with the local natives in an attempt to collect the 4000 Divya Prabandham. One of the most respectable academic scholars of Ramanuja's school is JAB van Buitenen. Here is what he says in the introduction to his translation of Yamunacharya's Agama Pramanya: 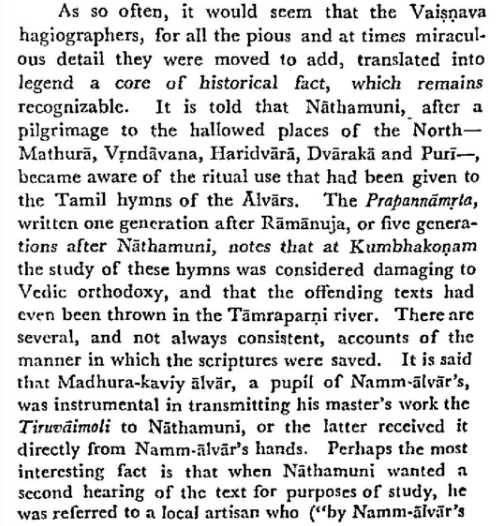 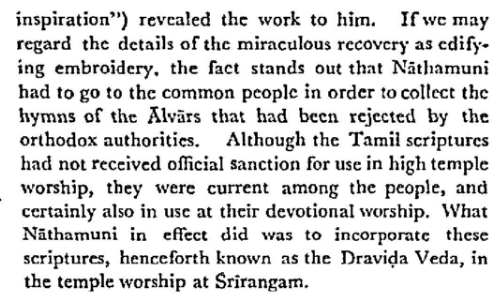 In "The Vaishnavite reformers of India; critical sketches of their lives and writings", the author T Rajagopalachariar uses the word research in connection to Nathamuni's efforts. 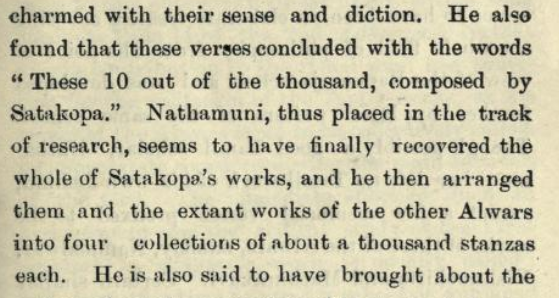 Nathamuni's traditional superhuman lifespan of 300 years is considered by modern scholars to be an editing of the Guruparampara authors so that he could be placed closer in history to Nammazvar. Here's a quote from Walter Neevel's book: 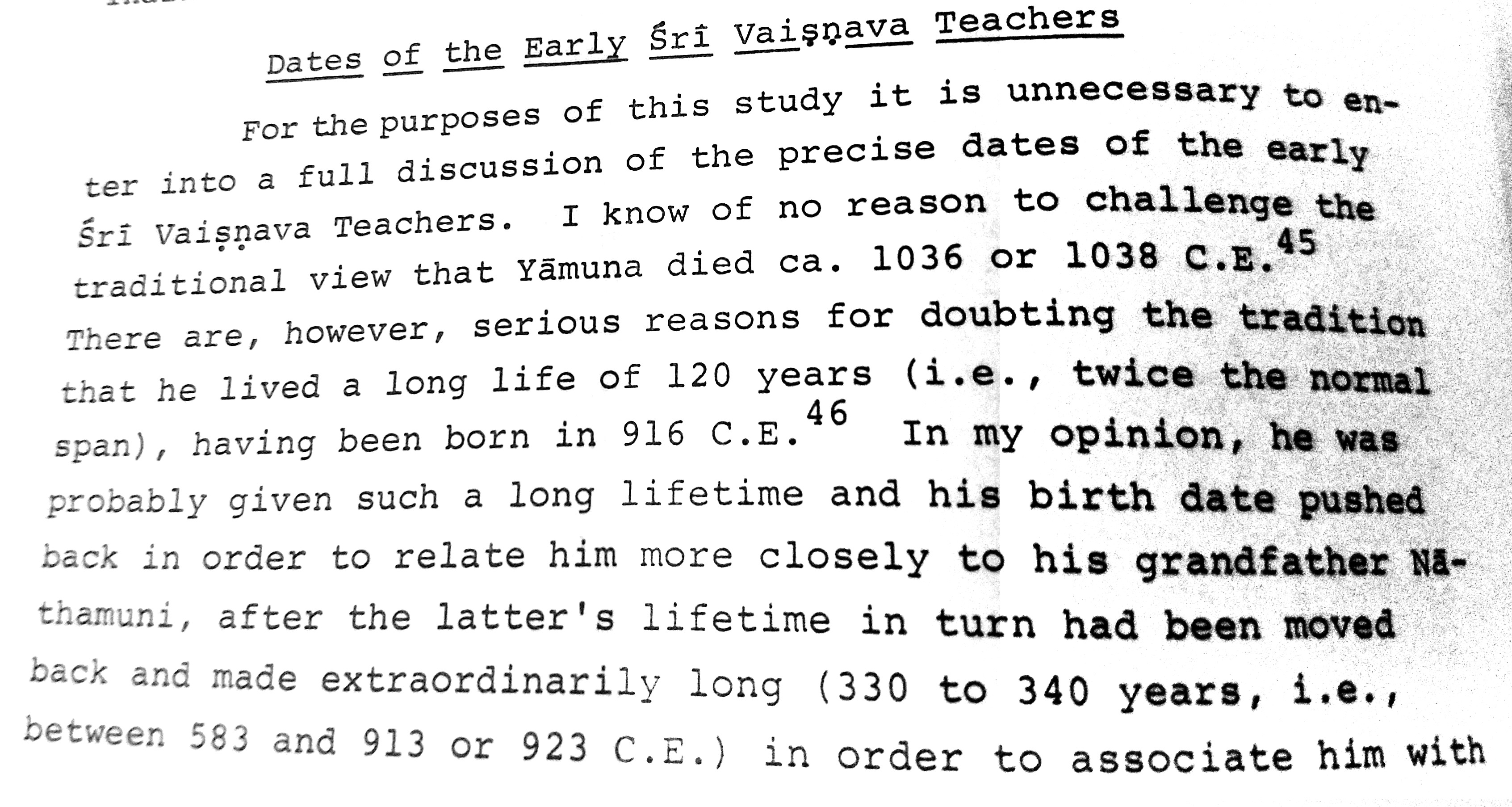 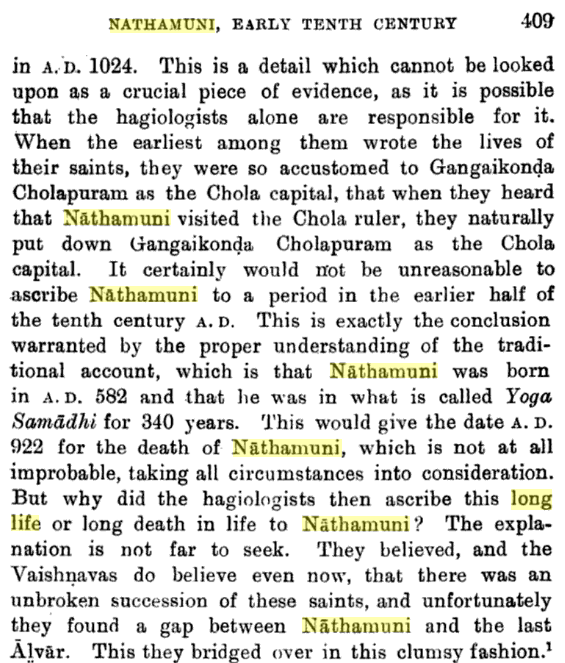 The comparison of Nathamuni to Vyasa is present in the Guruparampara as well. In "The Tamil Veda: Pillan's Interpretation of the Tiruvaymoli" By John Carman, Vasudha Narayanan quoted below, the word "Splendor" refers to the 6000 padi Guru Parampara Prabhavam. 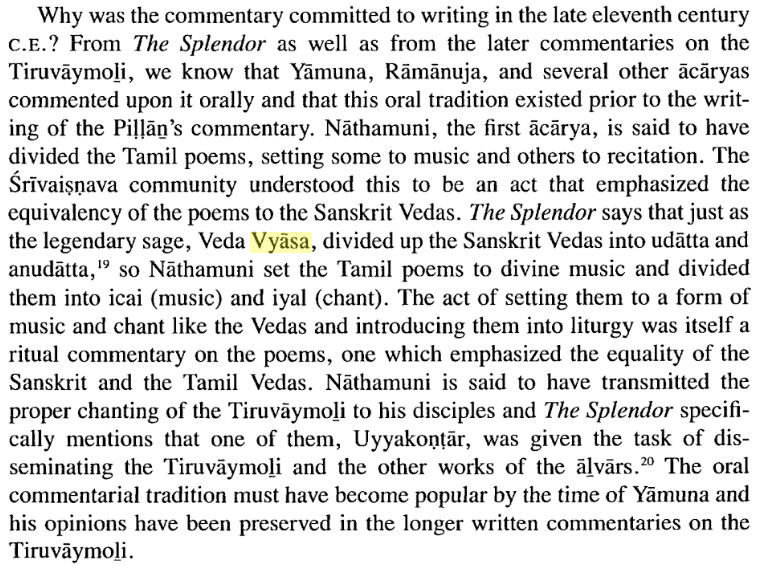 Not the answer you're looking for? Browse other questions tagged history vaishnavism sri-vaishnava alwar tamil .

6
Why are there no more Alwars?
7
Is Iyengar Yoga really based on Nathamuni's Yoga Rahasya?
4
How much does the divinely created statue of Ramanujacharya resemble him?
7
Is the Satvata Samhita, the oldest Pancharatra text, available online in English?
2
Where in the Narada Purana is the prophecy of Ramanujacharya?
0
Benefits of Varanamayiram
1
Who is Villiputhur Bagavar, the Vaishnava Brahmin who refused to associate with ordinary Brahmins?

7
Who compiled the list of 108 Divya Desams of Vishnu?
7
Is Iyengar Yoga really based on Nathamuni's Yoga Rahasya?
4
How much does the divinely created statue of Ramanujacharya resemble him?
1
Sri Ramanuja’s work referencing poems of alwars?