Is the Harivamsha a canonical text as part of the Mahabharatha?

I have seen people who say that Harivamsha is part of Mahabharata and in fact people use it as a source, and that there is a version of Harivamsha made by BORI.

But other people say it's not canonical/genuine ((As in this blog: Logic Astra - The Track record of demon Nikumbha) so my question is, is Harivamsha a canonical source or not?

Although considered a sequel to the Mahābhārata, Harivaṃśa is a much later work. Also, it is generally considered authentic only as far as events of Kṛṣṇa's life and divinity are concerned.

This is what Bibek Debroy says in the introduction to his translation based on the critical edition of the Harivaṃśa:

What is the Harivamsha about? In a general sense, it is about Krishna's life. When we first encounter in the Mahabharata, he is already an adult. Where was he born? What were his childhood and other exploits, those not recounted in the Mahabharata? The Harivamsha answers such questions. But such questions are also answered in the Puranas, at least some of them. The belief is that after composing the Mahabharata, Vedavyasa composed the Puranas. The Mahabharata is believed to have had 100,000 shlokas or couplets. The Critical Edition of the Mahabharata has a little short of 75,000. Even that, in the ten-volume translation, converts into something like 2.25 million words. Together, the eighteen Mahapuranas amount to another 400,000 shlokas. The Mahapuranas differ greatly in length, from around 10,000 shlokas in the Brahma Purana to more than 80,000 shlokas in the Skanda Purana. Nor were they necessarily composed at one point in time, with a range of anything between second century CE to tenth century CE. In all probability, Vedavyasa composed an original Purana that is now lost and all the present Puranas are additions and embellishments on that lost original. The Puranas are classified in different ways. For instance, some emphasize creation and are therefore identified with Brahma. Some are identified with Vishnu and some are identified with Shiva. But these are not neat silos and all of them traverse similar ground, with minor variations in the stories too. Among the ones identified with Vishnu and known as Vaishnava Puranas are the Vishnu Purana and the Bhagavata Purana. Most of what is found in the Harivamsha will be found in these two texts. In the Mahabharata, Krishna may have been elevated to the status of a divinity in some parts. But in other parts, he does display human attributes. Purely in those relative terms, in these two Puranas and in the Harivamsha, divine status is primary and the human traits are secondary.

This from M. N. Dutt's translation from 1897 based on a non-critical edition:

Harivamsha or the family of Hari (Srikrishna) is properly speaking a sequel of the great Epic Mahabharata. The work opens with a request made by Sounaka to Souti for an account of the two great clans namely, Vrishnis and Andhakas. He says:- "O son of Lomaharshana, while describing the birth and history of the Kurus you forgot to narrate the history of Vrishnis and Andhakas. It becomes you to relate their history" (Chapter I, Sloka 9).

The work in which an account of the Kurus is given is undoubtedly Mahabharata though we meet with a little confusion in the text, when it is mentioned as a Purana. This passage clearly shows that the object of the author is evidently to give a detailed account of the family of Krishna which is not to be found in Mahabharata.

It is very difficult to ascertain the true nature of this work - whether it is to be called a Purana or an epic poem. It is not mentioned in the list of Puranas or Upapuranas, though in style, form and character it resembles the Puranas. As in the Puranas and more particularly in Vishnu Purana so n Harivamsha we find an account of creation, the dimension of the earth, the division of the time and the history of the patriarchal and regal dynasties. They so much resemble each other that sometimes it appears, that one is the paraphrase of the other. The account of Krishna's early life and some of his miracles are merely the counterparts of the same in Vishnupuran. Thus it is evident that though this work is not included in the list of Puranas it is in reality one of them written with the same object and in the same style. It is called a sequel of the Mahabharata only because it gives a profuse account of what has been left off in that work. The greatest interest however lies in the fact that it gives an elaborate account of the life of Srikrishna and as such it is always regarded an authority.

It is almost impossible to ascertain the date of the composition of this work as it is of other ancient Sanskrit works.

In the Puranas however we see that the entire theology is based on the doctrine of incarnation - the various sects have their rituals and ceremonies definitely laid down and the caste rules introduced with all their severity and force. Besides we also find the doctrines of Vedanta and Sankya explained popularly in the shape of episodes. This clearly proves that whatever may be the actual of the composition of these works they are long posterior to the Mahabharata and the Ramayana. From the evidence of style, the treatment of subject matter, the account of creation and patriarchal families it is clear that Harivamsha, although it's a sequel to the Mahabharata was written long after that great work. If it was not written in the same period when the Puranas were composed it was not at least written earlier.

BTW, I couldn't find a single story involving Nikumbha in the Debroy translation. This is because:

You can read more about how the Harivaṃśa was critically edited by P. L. Vaidya here. 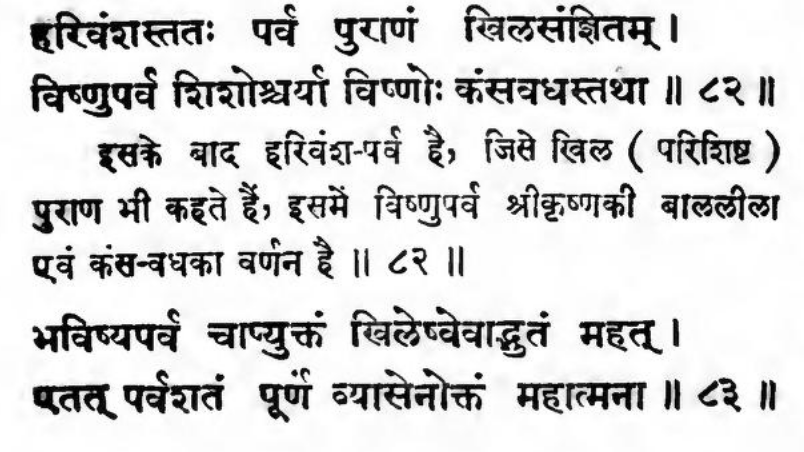 Then comes the Purana which is called Khilvansa. In this last are contained 'Vishnuparva', Vishnu's frolics and feats as a child, the destruction of 'Kansa', and lastly, the very wonderful 'Bhavishyaparva' (in which there are prophecies regarding the future). The high-souled Vyasa composed these hundred parvas... ~English translation source

So as per this chapter, Harivamsha (along with Vishnuparva and Bhavishyaparva) is a part of Mahabaharata and composed by Vyasa.

Not the answer you're looking for? Browse other questions tagged mahabharata harivamsa .

2
Where can I find an unabridged English translation of Harivamsa?
4
The inseparability of the Harivamsa from the Mahabharata and the number of verses accorded to it by traditional Sampradayas

2
Where does the Mahabharata say that liberated souls worship Krishna?
2
Did Arjuna have the ability to see the future?
4
What work of Vyasa says the Vedas were taught to Brahma through the heart?
5
Is K.M. Ganguli's translation of the Anu Gita in line with other Mahabharata translators?