What scripture does the original Achamanam mantra come from?

If you're a Brahmin, you're probably familiar with the practice of Achamanam, the practice of sipping water while reciting mantras in order to purify oneself at the start of Sandhyavandanam and other Hindu rituals.

But the mostly common version of Achamanam is the Shruti Achamanam, where you sip water three times while reciting three names of Vishnu:

My question is, what scripture does this mantra originate from? It is called the "Shruti Achamanam", so it presumably comes from Shruti, which is a term for the parts of Hindu scripture that were heard directly from the gods by sages, which were compiled by the sage Vyasa into the books we call the Vedas. So where in the Vedas can this mantra be found?

By the way, it's interesting to note that the Smriti Achamanam uses the Gayatri mantra, but the Shruti Achamanam, which is presumably far older, uses names of Vishnu instead. Gods like Vishnu aren't discussed as much in Vedic scripture, because Vedic yagnas involve gods like the Adityas more. So it's remarkable that the mantra for such an important Vedic ritual is a mantra to Vishnu.

The Achamana mantra in question seems to have originated from the Padma Purana but its not explicitly mentioned there as Achamana mantras.This is to be noted.

Another noteworthy point is that a common feature in most Achamanas that are found in the Smrithis/Puranas is that they all use Vaishnava mantras.

....As the churning started, innumerable of the proud Danavas who opted for the head of thousand faced Vasuki out of pride got perished due to the poisonous flames where as Devas were at the tail end. Eventally, a massive ‘Halahala’ or the sky-rocketing poisonous flames engulfed the Univerese and by the grace of Three Names of Lord Vishnu viz. Om Achyutaya Namah, Om Anantaya Namah and Om Govindaya Namah, Bhagavan Shankara gulped the blue poisonous flames in his throat thus giving him the epithet of Neela Kantha. By the power of the three names of Vishnu, there would never be any hardship faced:

(Whoever recites the Three Names viz. Om Achyutaaya, Om Anantaaya, and Om Govindaaya sincerely and with dedication, none of the poisonous diseases or Agni- based frights/deaths would affect)!

The following image is from an abridged version of Yajanavalkya Smriti.

So,the Achamana in question seems to be mentioned in the aforesaid Smriti as well.Here Angasparsha refers to the touching of various body parts with the 12 names of Lord Vishnu viz- Keshava,Narayana,Madhava,Govinda ....etc which follow the three sips and & thus completes the process .

In what follows,i'm attempting a compilation of a host(if not all) Achamana Mantras collected from varied sources followed by different Veda Shakhas, Sects etc.

2)3 sips with the Mantras

(from the Devi Bhagwatam)

3)3 sips with another Vishnu Mantra

With pre-collected water in a shankha or conchshell or atleast in a bowl of Kushaa, then perform three ‘Aachamanas’ or sips of spoonful of water while reciting the Mantra:

This would be followed by the Aghamarshana Mantras viz....

4)The following mantras are used by Paipladins(a Shaka of Atharvaveda):

5)Whereas for the Saunaka Shaka(of Atharva Veda) mantras are as below: 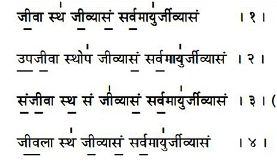 are the mantras used here.

7)For Chinnamasta (or Nila Sarswati Sandhya Prayoga etc) Achamana Mantras are as follows:

8)The followers of Arya Samaj use the following mantras:

The above Mantras should be from Vedas and Samhitas(because Arya Samaj gives only Vedas the status of Hindu Shastra & no other).

9)And yet another one(Not sure which sampradaya/sect/shakha use it but the mantras used are from Atharva Veda):

3 Sips with the mantra:

The purpose of posting all these(apart from a compilation attempt) is to show that there is no reason to believe that the Achamana given in the question is the Sruti Achamana or that it is the original one(as stated in the title of the question).

First of all not all Brahmins use same mantras for Achamanam.Example under Smartha Brahmin tradition it is as below naming names of 3 vedas. Om Rigvedaya namah Om Yajurvedaya namah Om Samavavedaya namah

I don't believe you can point these practices to any specific authentic shastras as most are defendant on various traditions that they are following most likely has root in some Rishi parampara.

Not the answer you're looking for? Browse other questions tagged vishnu vedas rituals mantras .

3
Which scripture is the source for this Achamanam?