For how many manvantaras did Prithu rule the Earth?

Prithu, son of Vena is a partial incarnation of Lord Vishnu who ruled the Earth for a long time. He is also mentioned in the Vedas. He is the seer of Mandala 10 hymn 148 of the Rigveda. He is famous for the legend of chasing the Earth Goddess. The Earth is named as Prithvi by his name.

According to Wikipedia, he is the first true sovereign because he there was no vegetation, agriculture and cities, grains etc., All these are developed during his reign. This is also confirmed by a Padma Purana passage which also says he ruled entire planet.

It is said that he started the rule during the secondary creation. But when did his reign end?

He was succeeded by Vaivasvata Manu of Solar dynasty 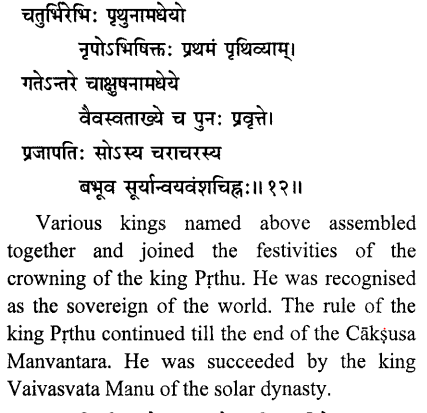 Not the answer you're looking for? Browse other questions tagged puranas earth kings manvantara .

10
Why was earth created and why did we come to Earth?
5
What do the Vedas say about the Earth?
7
Did Prabhupada believe in Flat earth theory?
1
Does the Srimad Bhagavatam say the Earth is flat?
3
How far is Brahmaloka from our Earth?
1
Who is responsible for the creation of Earth, Lord Shiva or Adhishakti?
2
is the notion of the earth asking for the burden of humans to be reduced found in scripture?
4
In which scripture is the earth first personified as a female deity?