That I to all the people may address this salutary speech, To priest and nobleman, Sûdra and Arya, to one of our own kin and to the stranger. Dear may I be to Gods and guerdon-giver. Fulfilled be this my hope: be that my portion!

The above verse has been used by Neo-Vedantins to claim that everyone is allowed to study the Vedas (or at least hear Vedic chanting).

Both Uvata and Mahidhara (who lived prior to Sayana), who have written commentaries on the Shukla Yajur Veda, explain this verse plainly. In other words, they take the meaning at face value.

So the Veda itself says that it is for the benefit of all classes of society and for all people, domestic and foreign.

I am just posting a Hindi Screenshot of it, someone who understands it better can translate if the answer is relevant.

After Baladeva Vidyabhusana argues that Itihasas and Puranas are the fifth Veda, an objection may be raised that then they also should not be open for all, then he answers it with the below verse that in Vedas certain mantras are open for outcastes, in the same way puranas and itihasas are open for all. The main verse is his, then commentary is by someone unknown person, he may be one of his disciples. 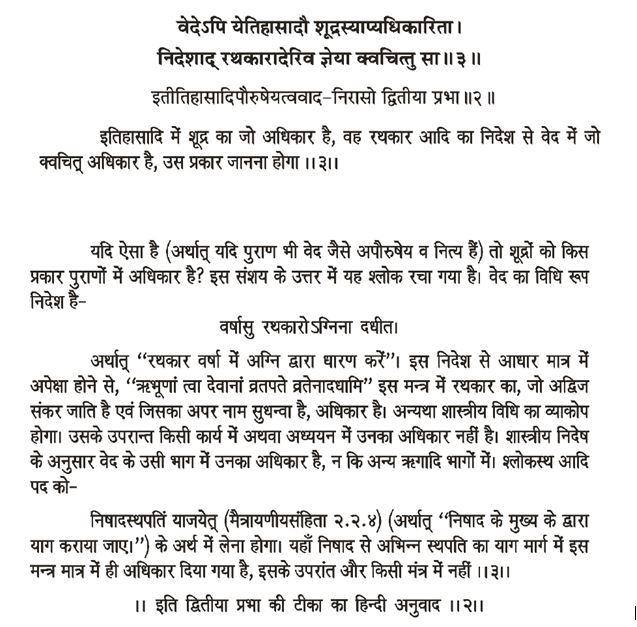 In the highly upvoted answer, I don't see how reference to commentaries of Uvata and Mahidhara led the member to conclude that Vedas can be chanted by everyone.

Rishi Laugakshi is said to be the Mantra-Drashta for this verse. All this verse is talking about is one's wish to be blessed in a way that his speech can be addressed to everyone and let that speech be "kalyani" ( pleasing). Quoting again the English translation from the upvoted answer

I don't see how wish to be blessed with a speech that is meant for everyone's "kalyan" is synonymous to Veda mantras can be chanted by all and sundry.

Also, as per Vachaspatya (a popular sanskrit to sanskrit dictionary authored in 19th century) this verse is to be used for "Kalyanavaachana". Just like Punyaahavaachana and associated rituals where Ritviks bless "let there be punyaha, shanti, vriddhi etc." , this verse is used to invoke let there be "kalyana".

Finally if one still feels otherwise then they need to help provide reconciliation with Krishna Yajurveda Taittiriya Samhita which says- तस्मात् शुद्रोयज्ञेऽनवक्लृप्त: (Shudras don't have Vedadhikara).

As a side note, the origin of this misinterpretation was the book Satyartha Prakash written in 19th century.

6
Are there any proofs in Hindu Scriptures as well as cited by scholars that Shudras might have / can read Vedas?
3
Shudra learning and chanting Vedas