Where is it mentioned that chanting Krishna is more powerful than chanting Rama's name?

I came across a topic in which it is explained that 1000 times chanting Vishnu equals chanting rama's name 3 times and I have a subsequent question.

I have heard in the temple that chanting Krishna's name is more powerful than chanting Rama's name x number of times (I think x was 1000 but I am not sure). Where is this mentioned in the scriptures?

There is not a direct comparison. This is indirectly mentioned in two sources:

Now, first of all there is no direct comparison between these two names. Also, रामः (raamah) and कृष्णः (krishnah) indeed part of few versions of Vishnu Sahasranama.

So, such lines are just eulogy to the God and should not be used for direct comparisons.

I will be answering it based on the Krishna Sandarbha by Jiva Goswami where in he discussed this as part of the actual subject that Krishna is the source of all incarnations which I answered here.

First, he quotes from Brahmanda Purana.

Lord Krishna is the Supreme Personality of Godhead, and His holy names, qualities, and pastimes are sublime and unequaled. That no other holy name of the Lord is equal to the name of Krishna is confirmed in the following verse from the Shri Krishnashöottara-shata-nama-stotra, found in the Brahmanda Purana:

"By chanting the holy name of Lord Krishna only once one achieves the same purifying effect obtained by chanting other names of the Supreme Lord three thousand times."

[Next, someone may present the following objection:] Is it not so that the Brihat-sahasra-nama-stotra (in the 71st Chapter of the Uttara-khanda of the Padma Purana) Lord Shiva says to Parvati: "O beautiful goddess, a single utterance of the holy name of Rama is equal to a thousand utterances of these other names of the Supreme Lord."

Now the verse about direct comparison is quoted:

Next follows a quote from Vishnu Dharmottara purana:

The potency of the holy name of Shri Krishna is also described in the Vishnu-dharmottara Purana: "O best of men, on both saints and the cruel hearted(demons) , chanting the holy name of Krishna has equal potency[both attain love of God]"

Next comes a quote from Prabhasa purana(which is a upapurana whose information is given here) which clearly says Krishna's name is the most important.

That Shri Krishna is the most important of all holy names of the Lord is described by Lord Krishna Himself. As recorded in the conversation between Narada and Kushadhvaja in the Prabhasa Purana, Lord Krishna said:

"O Arjuna, of all My holy names, the name Krishna is the most important."

By natural assumption that Rama appeared first, while copying or putting in writing form, the order would have been reversed and thus in some manuscripts we find Hare Rama first.

Also, there are cross references for the same mantra in other scriptures, which you can see here.

CC Madhya 9.33 (The Verse from Brahmanda-Purana)

sahasra-nāmnām — of one thousand names; puṇyānām — holy; triḥ-āvṛttyā — by thrice chanting; tu — but; yat — which; phalam — result; eka-āvṛttyā — by one repetition; tu — but; kṛṣṇasya — of Lord Kṛṣṇa; nāma — holy name; ekam — only one; tat — that result; prayacchati — gives.

“ ‘The pious results derived from chanting the thousand holy names of Viṣṇu three times can be attained by only one utterance of the holy name of Kṛṣṇa.’ 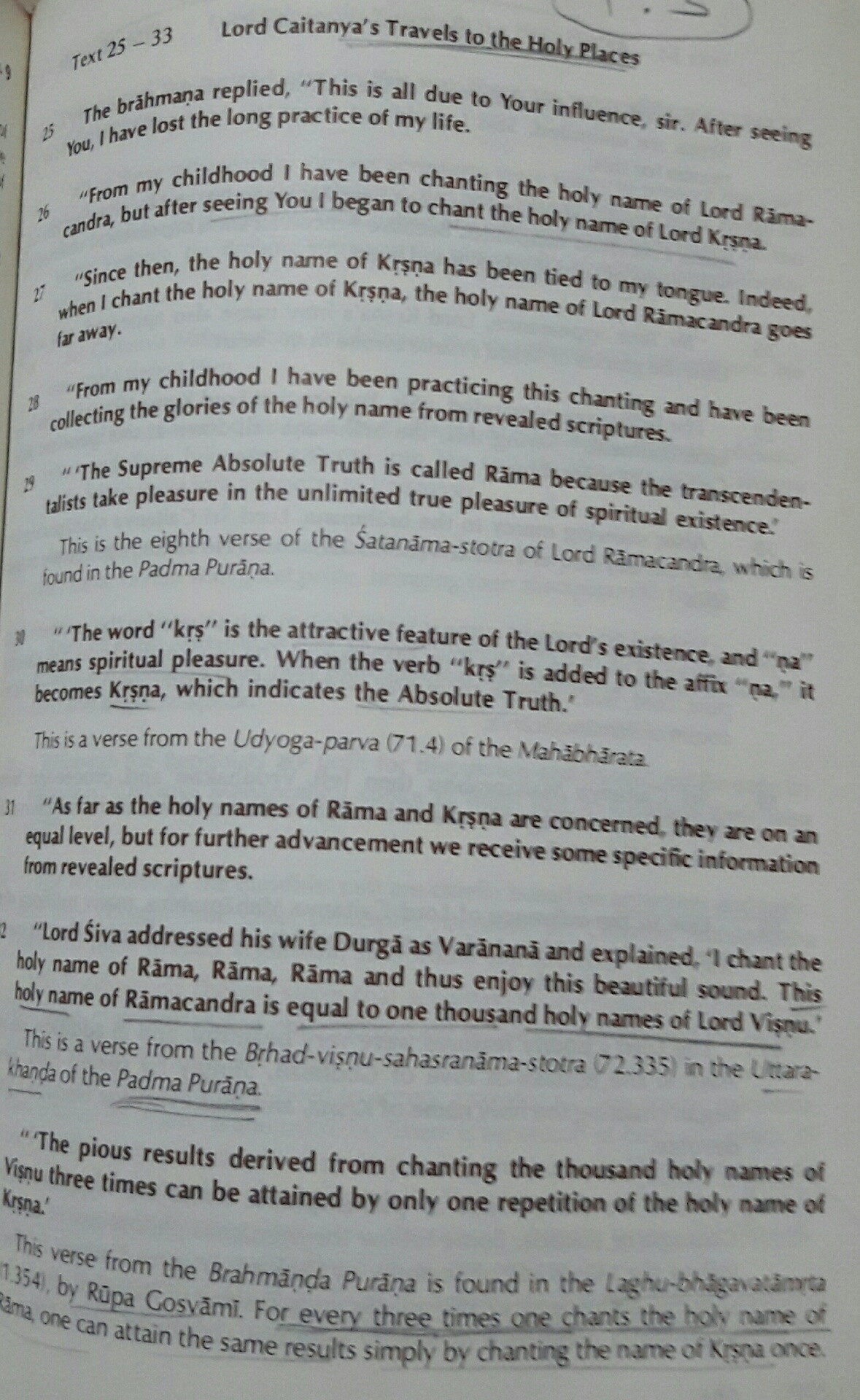 During His south india pastimes, Lord Chaitanya visited many south indian ancient temples. The vaishnava devotees there are telling Him that after His presence, they are realizing that chanting Krishna once is equal to chanting Rama thrice and chanting Lord Vishnu thousand of times.

And there is a very beautiful verse in Brahma-samhita:

The topmost of the Divine Rasas is the Madhurya and is only present in Sri Krishna.

It is mentioned nowhere. In Brahmaand Puraan, it is said that Krishna's name = 3 times whole Vishnu Sahasranam!!

Not the answer you're looking for? Browse other questions tagged krishna rama .

40
What are some online sources to get unabridged Hindu Scriptures or to learn Hinduism?
6
On what basis is Krishna claimed to be source of Vishnu?
12
Why are the names of Lord Krishna and Lord Rama superior to the name of Lord Vishnu?
11
Please provide all the scripture references where Hare Krishna Maha mantra is mentioned except Kalisantarana Upanishad?
11
Where is the mention of 'Chanting Rama three times is equal to chanting 1000 names of Vishnu'?
4
Where is the verse ''sahasra-namnam punyanam... prayacchati'' found?

13
Why does Vishnu have eight arms when Krishna and Arjuna go to see him?
10
Why did Lord Rama and Lord Krishna choose to born at (12 O'clock) day and night time respectively?
7
Why does Periyalwar say that Krishna was born in Thirukottiyur rather than Mathura?
11
Where is it mentioned that Krishna and Rama Worshipped Shiva Lingam?
7
What scriptures describe Krishna granting Moksha to Ghantakarna, a Pishacha who killed a rishi?
12
Why are the names of Lord Krishna and Lord Rama superior to the name of Lord Vishnu?