Goddesses with skull-cup in one hand

Can any experts here, please enlighten me, who are the Goddesses,having skull-cup in one hand.

Though I heard that Goddess Kaali & Chanmunda are two of them. But why are they carrying skull cup- *kapaalahastam *?

I meant, having a kapala in HER hands, what kind of boons or (( any kind of negativity it emits ??)) or whats the kind of bhaava SHE has?

please enlighten me, who are the Goddesses,having skull-cup in one hand

Goddess Kali has numerous forms such as GuhyakAli, SmashAna KAli, Bhadra KAli, ShyAmA KAli, Dakshina KAli etc. The disciples who are initiated into the Bija mantra Krim, shall have to worship the Goddess with the following Dhyanam:

So, in this form the Goddess is holding a skull-cup in one of her hands.

Also, KapAla hastam is not the same as Vara abhaya karAm (even the DhyAnam I have given has this description). Vara Mudra etc are postures of hand where as Kapala Hastam signifies that she is holding a skull-cup in one of her hands.

I have checked her DhyAnam (Om kAli karAla vadanA .. etc - the one used during Sandhi Puja of Durga Puja ) and she is not depicted as holding a skull-cup in it.

She is the 2nd MahAvidyA and she is holding a skull-cup in one of her 4 hands.

Nila Tantram's 4th Patalah has the DhyAna Sloka from which we get:

Therefore, the 4 hands are holding a Khadga, a Katri, a lotus and a skull-cup.

For this form of the Goddess, there are many mantras and hence many DhyAnam. In some of those forms, she is having a Nara KapAla.

So, one hand is holding the kapAla.

Kharpara is nothing but a half-skull.

She is another Goddess who's having the skull cup.

She is also holding it.

She has four arms and she is holding it in one of her right hands.

None of them have it like ChinnamastA, Bhairavi, BagalAmukhi etc.

Significance of holding a skull in the hand:

"The aspirant needs some amount of dispassion (Vairagya) in order to progress in the path of spirituality.

And, the end destination for a human being, who's having all sorts of desires etc, is in the cremation ground, and in the form of a Nara-kapAla (skull).

By holding the skull-cup, Goddess is helping to cultivate a sense of Vairagya in the aspirant's mind". 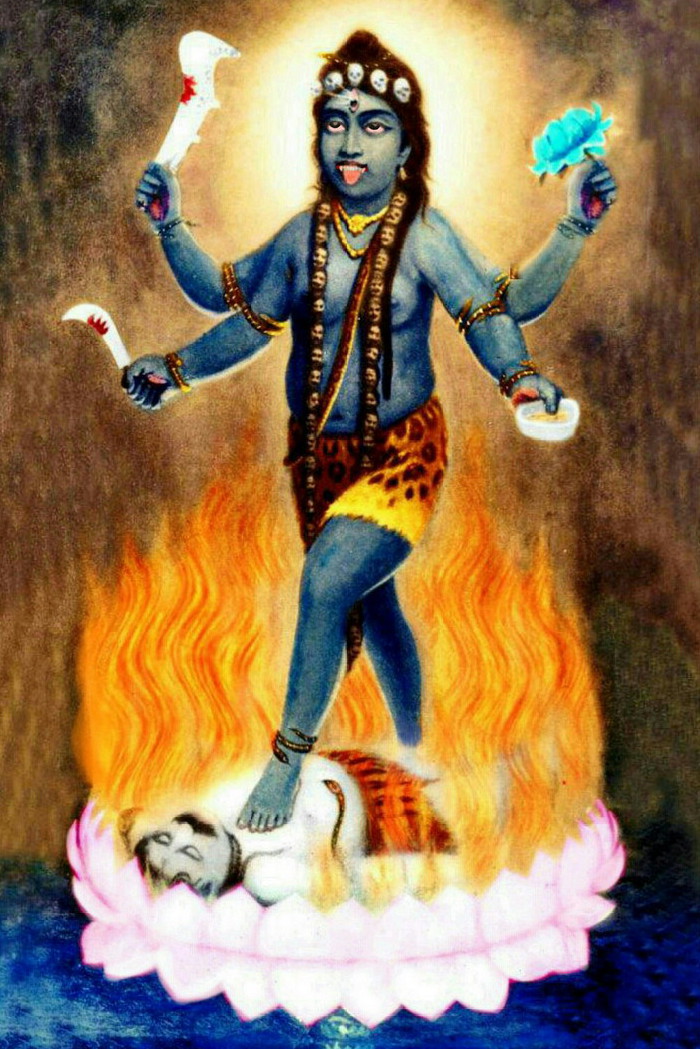 There are numerous forms of Gods and Goddesses who holds narakapala or kapalapatra in hand as per different Tantras and Puranas. The Dakshina-Kali (The Ekakshari Form),Ugra- Tara(**image as per the dhyana-mantra enclosed on top of the answer),Ekjata-Tara, Bhadrakali, Siddhakali, Mahakali etc are few of them**.(Reference: For the dhyana-mantras from differnt sources with meanings in bengali, please see 'Sastramulak Bharatiya Saktisadhana, Upendrakumar Das, RMIC, vol 1, chapter 11).One image of Ekakshari Dakshina Kali at Puri Sri Omkarnath Nilachal Ashrama is enclosed (bottom) where Devi is holding kapala-patra in lower left hand.Perhaps this is the inly idol of Ekakshari Kali in India.

Narakapaala can be of two types: one used as 'kapaala-patra' or a pot for drinking blood or wine or it can be 'nara-munda' i.e. human head.

Devi bestows liberation by giving tattva-jnana and never leaves a devotee as the devotee is very dear to Her. This is implied by the nara-kapaala or human-head.(Reference: Sastramulak Bharatiya Shaki-sadhana, Upendrakumar Das, RMIC, vol 1, page 474).

On the other hand, the wine in the kapaala-patra

represents that Supreme knowledge, that gives bliss.So the wine holding in hand means Devi is full of Bliss of Brahma-jnana. (Ibid, page 478).

According to Swami Nigamananda, the wine means

Devi is drinking the wine of Attachment(Moha) and observing the plays of the Time (Kaala), Reference : Tantrik-Guru, Nigamananda, Sarasvata Math, page 58).

The blood in the kapaala-patra is

So it can mean that Devi removes Rajo-Guna of the devotee.

By the way the dhyana-mantra of Bhadrakali in Purascharyarnava shows Her drinking wine and blood and in Prapanchasaara-Tantra She is depicted holding nara-kapala.(lbid, page 486)

Devi Mahalakshmi drank madhu before killing Mahisasura, but She did NOT use kapala-patra(Sri Sri Chandi, chapter 3).And the Heads of Shumbha and Nishumbha were gifted to Devi Mshasaraswati by Devi Chamunda.

Such symbolic meanings are not accepted by all saints, as Devi has Her own form and She appears in front of the aspirant when the sadhana is successful. This is one of the best signs of mantra-siddhi,as per in Tantra-saara, as mentioned by Swami Nigamananda (Ibid, page 183).

There is no question of emitting negativity.In fact its taking up the negativity and bestowing positivity. and the bhava of God is always graceful to one who worships God with devotion.In Devi-Gita Devi says She always protects Her devotee. 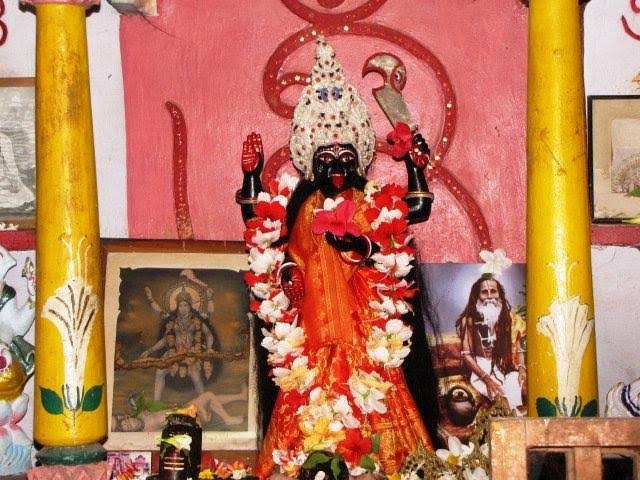 Not the answer you're looking for? Browse other questions tagged goddess dasha-mahavidya .

5
Relation between Chamunda and Kali

8
Are women allowed to let their hair loose? Why are Goddesses depicted with their hair untied?
6
What is the actual name of these mysterious goddesses?
3
What is the meaning of Karni Mata's description as a woman with a head in her hand?
2
Is there any relation between Revati nakshatra and goddesses Revati