Which Hindu episode does this Khmer relief from Beng Mealea show? 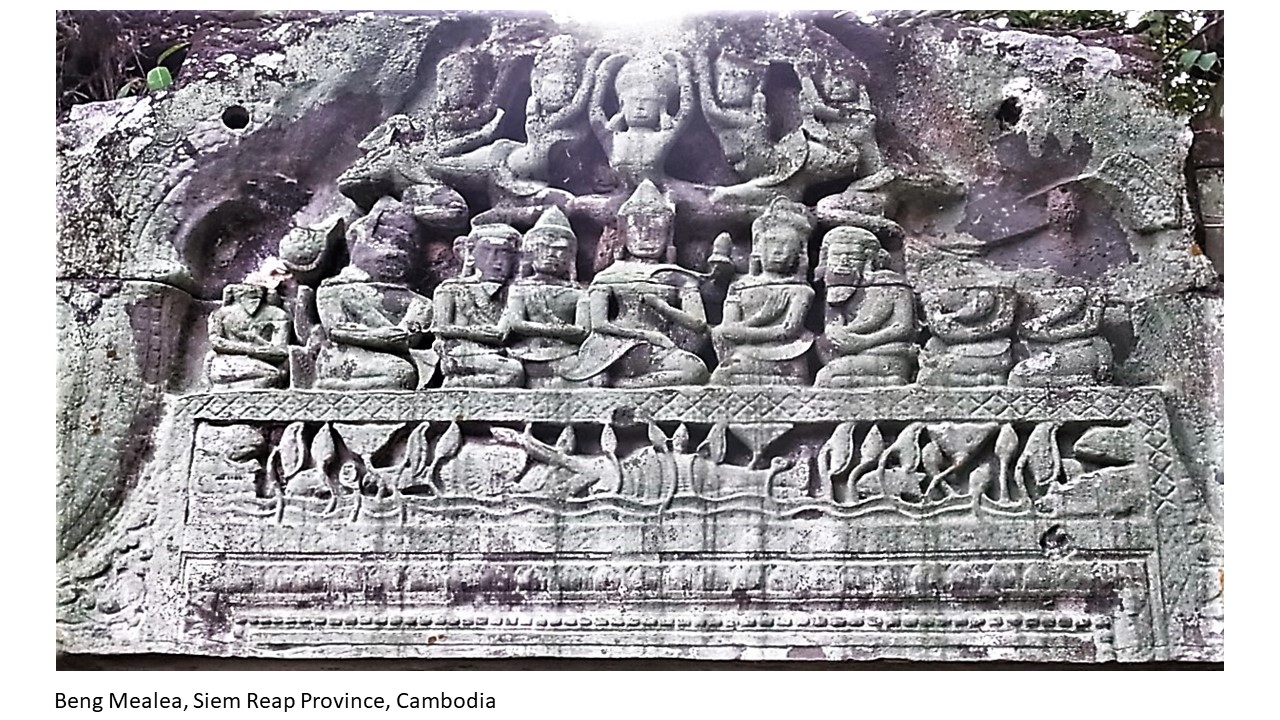 The person below the main relief is considered a man lying in the water. It is conjectured that he is Shyavana, a sage meditating in a holy river.

The Beng Mealea relief image is showing an ascetic lying under ground or probably underwater performing tapas or penance. There are many ways mentioned in Hinduism scriptures with which one can perform tapas or penance. For e.g. living only on air , Standing on one foot in meditation , surviving only on dry leaves etc.

Similarly ascetics doing Tapasya under ground or water are class of ascetics named as Unmajjakas - The Submerged as mentioned in Baudhāyana Dharma Sutras -Page 214.

Mahabharata calling this act as mode of life - Udavasa . उदवास - UdavAsa or residence in water. In this Udavasa vow a person sometimes can also come out of water of river or pond and stand up on legs.

The names of two Rishis who were Unmajjakas or Udavasakas for some years are mentioned in Hinduism scriptures mainly Mahabharata and Vishnu Purana those were - Rishi Chavana and Rishi Saubhari.

In Mahabharata- Anushasana Parva-Chapter 50 , there is mention of an account of Rishi Chavana observing Udavasa vow for twelve years.

"Bhishma said, 'I shall, in this connection, O thou of great effulgence, recite to thee an ancient narrative of a conversation between Nahusha and the Rishi Chyavana. In days of yore O Chief of Bharata's race, the great Rishi Chyavana of Bhrigu's race, always observant of high vows, became desirous of leading for some time the mode of life called Udavasa and set himself to commence it. Casting off pride and wrath and joy and grief, the ascetic, pledging himself to observe that vow, set himself to live for twelve years according to the rules of Udavasa. The Rishi inspired all creatures with a happy trust. And he inspired similar confidence in all creatures living in water. The puissant ascetic resembled the Moon himself in his behaviour to all. Bowing unto all the deities and having cleansed himself of all sins, he entered the water at the confluence of the Ganga and the Yamuna, and stood there like an inanimate post of wood. Placing his head against it, he bore the fierce and roaring current of the two streams united together,--the current whose speed resembled that of the wind itself. The Ganga and the Yamuna, however, and the other streams and lakes, whose waters unite together at the confluence at Prayaga, instead of afflicting the Rishi, went past him (to show him respect).

Assuming the attitude of a wooden post, the great Muni sometimes laid himself P. 39 down in the water and slept at ease. And sometimes, O chief of Bharata's race, the intelligent sage stood in an erect posture. He became quite agreeable unto all creatures living in water. Without the least fear, all these used to smell the Rishi's lips. In this way, the Rishi passed a long time at that grand confluence of waters.

Brief Story - : There is a story associated with Rishi Chavana living under water for observing this vow. As mentioned earlier Chavana Muni was once observing a vow Called Udavasa and was living under water for 12 years. Once in between , when he was laying underwater some fishermen came at the spot to catch the fish. They laid out the net along with the river. Maharshi Chavana being underwater also got caught in those nets along with the fish. The fishermen feared seeing that they pulled rishi out of water . Rishi Chavana told them that he will defend those fish and he will either live or die with the fish. Hearing the saying of the Rishi the fishermen got very afraid and went to king Nahusha for the solution. Upon coming to King Chavana asked King Nahusha to pay the price of the caught along with him also to fishermen . The fishermen requests to pay 1000 Nishkas to Nahusha , but Chavana argues that this 1000 Nishkas are not the justified worth of he himself and asks king to give something other than that. King Nahusha then accepts to give away half of his kingdom to fishermen , but again Chavana says that his half of the kingdom is also not the rightful value of himself. After consulting with Brahmanas king Nahusha gave away a cow as a value of the catch and Chavana both to fishermen. The fishermen then gives that cow as a donation to Rishi and being satisfied with that donation of a single cow Chavana sends the fishermen to heaven. The Moral of the story is importance of Donation of the cow and how Godana is more valuable than all the other donations,

Rishi Chavana laying underwater for Tapasya is part of the above story. But the Purpose of this Udavasa wow is also mentioned in Mahabharata. But Rishi Chavana being great Rishi did not even wanted that and didn't performed this vow for being lord of Heaven.

P. 56 One who passes some time in that mode of life which is called Udavasa, becomes the very lord of Heaven.

P.363 The devout sage Saubhari, learned in the Vedas, had spent twelve years immersed in a piece of water; the sovereign of the fish in which, named Sammada, of large bulk, had a very numerous progeny. His children and his grandchildren were wont to frolic around him in all The Story in brief - Once Rishi Saubhari had spend twelve years immersed inside water performing tapasya. Once when he was underwater he saw sporting / mating of fish and playing with their offspring. By seeing this scene he also desired to got married and have children and then he decided to marry daughters of king Mándhátri. Even though he was performing server tapas ,his mind got diverted from that even looking at the sports of the fish.

The moral of the story is how a person's mind gets disturbed and gets involved in sexual desires , even watching mating of the fish in the water.


The story of Rishi Saubhari is also mentioned in Srimad Bhagavata purana as downfall of Rishi Saubhari and warns us about how our mind gets attracted towards material desires , just by looking at outside world. And teaches a lesson to keep very tight firmness of mind while performing tapasya to those who are doing it.

Thereafter, one day while Saubhari Muni, who was expert in chanting mantras, was sitting in a secluded place, he thought to himself about the cause of his fall down, which was simply that he had associated himself with the sexual affairs of the fish.

Alas! While practicing austerity, even within the depths of the water, and while observing all the rules and regulations practiced by saintly persons, I lost the results of my long austerities simply by association with the sexual affairs of fish. Everyone should observe this falldown and learn from it.

So it is quite possible that the relief in your question is either of Rishi Chavana or Rishi Saubhari , both who laid down under water for tapasya. And the persons standing above them probably are the disciples of them .