Why do Lord Vishnu and Lord Shiva always meditate on each other?

I watched a TV serial named "Devo ke Dev Mahadev" on channel "Life Ok". In that, they mentioned several stories of Lord Shiva and Lord Vishnu always meditating upon each other and connected to each other at all times.

Is that true? If yes, what is the reason behind this? Can anybody enlighten me on this?

Reset to default
14
Want to improve this post? Add citations from reputable sources by editing the post. Posts with unsourced content may be edited or deleted.

Why they need to understand their predecessor process ? Natural law, every process is the outcome of a process, and to understand a process, you need to know origin process. This also shows the cyclic and infinitum nature of any process's existence. This is a reason why science went way back to atoms, then to neutrons and still searching the cause of it(currently medalling with string theory).

To make everything more visible, I created this image which conveys it all. In the image, B = Brahma, V = Vishnu and S = Shiva. 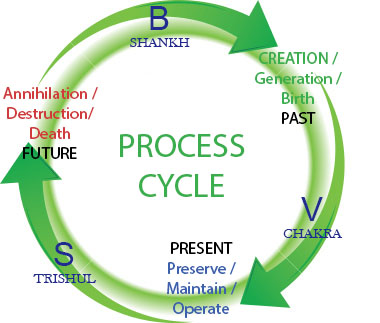 But is it not written in Puranas ? Yes its written, but in other way, puranas say :

But meditation is different than worshiping. Lord Shiva cursed Lord Brahma that he would not be worshiped by anyone. Meditation is needed to understand something, you want to understand 'BIKE' meditate on it, you want to understand 'GOD' meditate on him. Worshiping is kind of give-take relationship between Purusha and Prakrati, the prakrati worships Purusha, to get something from it. Some worship Purusha to easily understand the way(the creation or the God), because meditating can sometime become tougher and time lengthy and needs higher consciousness.

No one knows anything. The devotees of Vishnu say Lord Shiva meditates upon him, the devotees of Mata Shakti (Aadishakti) say he meditates on her. Different people have different opinions because no one wants to see their favourite deity look small in front of other but the truth is he doesn't meditate upon any other deity.

Who says meditation is only done upon somebody? No it's not. Some people who are atheistic also meditate. They don't meditate upon anyone. As you know there are three primary deities: Brahma, Vishnu and Mahesh. Do you know why Shiva is called 'Mahesh'? What does it mean? 'Maha' + 'Ish' means Mahan Ishwar or you could say 'sabse bade Ishwar', above whom there is nothing, beyond whom there is nothing.

There's an order of power. From all deities to King of deities Devraj Indra. If he couldn't handle anything they go to Lord Brahma and if he can't handle something, he refers them to Lord Vishnu and if the problem still seems uncontrollable, they are referred to the Supreme God; The one who is Mahadev (Devo ke Dev). Whom all worship, humans, deities, even demons and ghosts: Lord Shiva.

He doesn't need to meditate upon anyone. He is the Supreme Soul. Aadi Shakti is his powers he is the controller. He meditates to control Yuga. He meditates to create situations and meaningful examples for our life like Ram and Ravan, Maa Durga and Shumb Nishumb etc. Every situation what happened what we read in Puranas and Upanishads was created by him only to give us a hidden message. He meditates to control the whole Universe and that is from within only. Whatever we see is him only and whatever that doesn't exist is also in him only. When there was nothing, it was him only. And when there will be nothing, only he will be present there. He is anadi, he is anant.

All deities even Lord Vishnu also worships him in all his avatars. And that is not hidden, all know Rama was Shiva bhakth, Parashuram was Shiva bhakth and even Krishna got boon of sons from him. He is beyond time cycle and everything he never takes birth like other Lords and there is a misunderstanding that Hanuman was his avatar. No he wasn't. He was his Ansh avatar not him. Now many would say Krishna said he is the supreme one in Gita. If you see what Gita is all about what Lord Krishna was trying to tell, you will see it's "atma" which is the supreme soul. What can't be killed what does not take birth. Because we all atma's are a part of parmatma. He gave knowledge of atma, knowledge of Gita on supreme soul's behalf..because he himself is a part of him.

And yes now some of you must be thinking if Lord Shiva is the supreme power than why he needed Lord Vishnu to save his life from Bhasmasur I know some must be thinking. But no one knows about this incident exactly. The boon was given to him of burning anyone instantly if he puts his hand on that person's head. If Shiva wanted to kill him himself couldn't he kill by his trident (trishul) without letting him put his hand on his head? If Vishnu wanted to kill Bhasmasur couldn't he kill him by his disc (Sudarshan Chakra)? He could. They could. But still they didn't. Why? Have anyone of you try to understand why they didn't they kill him by their weapons? Why by dancing move? Let me tell you why. Because whatever happens has a hidden message behind it. And in that case this incident took place to show all of us an example that same boon (vardhan) what we ask for and try to misuse after getting can turn into curse (shrap) that was an example for all of us. We are very small creatures with too small minds to understand his leela.

I'm requesting to you all worship who you want to pray to Shiva, Krishna or Rama or anyone just don't try to show your favorite deity superior to Lord Shiva. Because your favorite deity themselves don't like it that you are insulting the one who they themselves worship. No matter which God you worship, you worship him only you can worship to yourself also because you are also a part of him. You are not distinct. It's written in Vedas: Shivoham (I am Shiva) Aham Bharmasami (mein hi param brahma hu).

In Skanda Upanishad, we find the following verses:

Quoting the translation from here:

8-9. (I bow) to Shiva of the form of Vishnu and Vishnu who is Shiva; Vishnu is Shiva’s heart and Shiva, Vishnu’s. Just as Vishnu is full of Shiva, so is Shiva full of Vishnu. As I see no difference, I am well all my life.

Now, one always think upon what's in their hearts because that's very dear to them.

So, these verses might have inspired the serial makers in showing Shiva and Vishnu as always meditating upon each other.

(NOTE - Skanda Upanishad is one of the 108 Upnaishads and is a minor Upanishad. It is linked to the Krishna Yajurveda.)

Lord Shiva stays in samadhi state and not in any meditative mode, the traditional shaivite scholars including some of the great Vedantic Advaitins see Lord Shiva as the state of "Turiyam" i.e the forth state which is pure consciousness (Shudda Chethana).

Whereas Lord Vishnu worshipping his Lord for Sudarshana chakra is evident from Hari vamsha parva of mahabharata.

That place where (Kailash) Hari obtained the Chakra by worshiping for several days the Jagatpati (Shiva), by lotus flowers and by his eye.

Lord Vishnu along with Brahma being eternal subservient and devotee of Parameshvara Shiva is extremely evident from traditional Upanishads too which are quoted by Advaitins (prior to 12th century too).

“The pranava (the sound of Om) makes all the souls to bow before it. It is the one and only one which has to be meditated upon as the four Vedas and the birth place of all devas. One who meditates like that goes away from all sorrows and fears and gets the power to protect all others who approach him. It is because of this meditation only that Lord Vishnu who is spread every where, wins over all others. It is because Lord Brahma controlled all his organs and meditated upon it, he attained the position of the creator. Even Lord Vishnu , parks his mind in the sound (Om) of the place of Paramathma (ultimate soul) and meditates upon Ishana, who is most proper to be worshipped. All this is only proper in case of Ishana”.

Considering principle Upanishads like Kaivalya Upanishad, Shvetashvatara Upanishad, Jabala Upanishad and Maitri Upanishads which have been quoted by first ever legendary vedantic titan Adi Shankaracharya, Advaitic interpretations conclude Lord Shiva to be the absolute representation of the 'Nirguna Brahman' talked in Upanishads whereas Lord Vishnu is significant only in the mode of bhakti.

Hence, according to pure shastras Lord Vishnu is eternal devotee of Shiva whereas Lord Shiva is never depicted as someone who behaves like devotee.

Note:- None of the puranic or mythological scriptures can be considered to know about this topic as they are unequivocally sectarian.

Not the answer you're looking for? Browse other questions tagged shiva vishnu worship .

42
Why are temples devoted to Brahma so rare?
6
On whom does Lord Rudra meditating in Kailash? Any reference to scriptures about it?
2
What does Lord Shiva think of during meditation? Also, did He ever fall prey to pride?
0
Why does Lord Shiva meditate at all?

23
Why did Lord Shiva fight with Lord Vishnu?
45
Why doesn't Shiva worship anybody where as Vishnu worships him in all his incarnations?
15
Did Rama know that he was Avatar of Lord Vishnu?
8
Why is Lord Shiva always worshiped alongwith Shakti and never alone?
12
Adi Buddha and Gautama buddha, Which one is the real avatar of Lord vishnu?
5
Is Indra the chief god of the Vedas?
6
Lord Shiva and Lord Vishnu