What percentage of Hindus belong to a sect that subscribes to the Vedanta school?

But it seems to me that one school is vastly more popular than the others: the Vedanta school, which derives its tenets from the philosophical teachings of the Upanishads, as expounded in Vyasa's Brahma Sutras. Here is Wikipedia's chart of the various Vedanta philosophies: 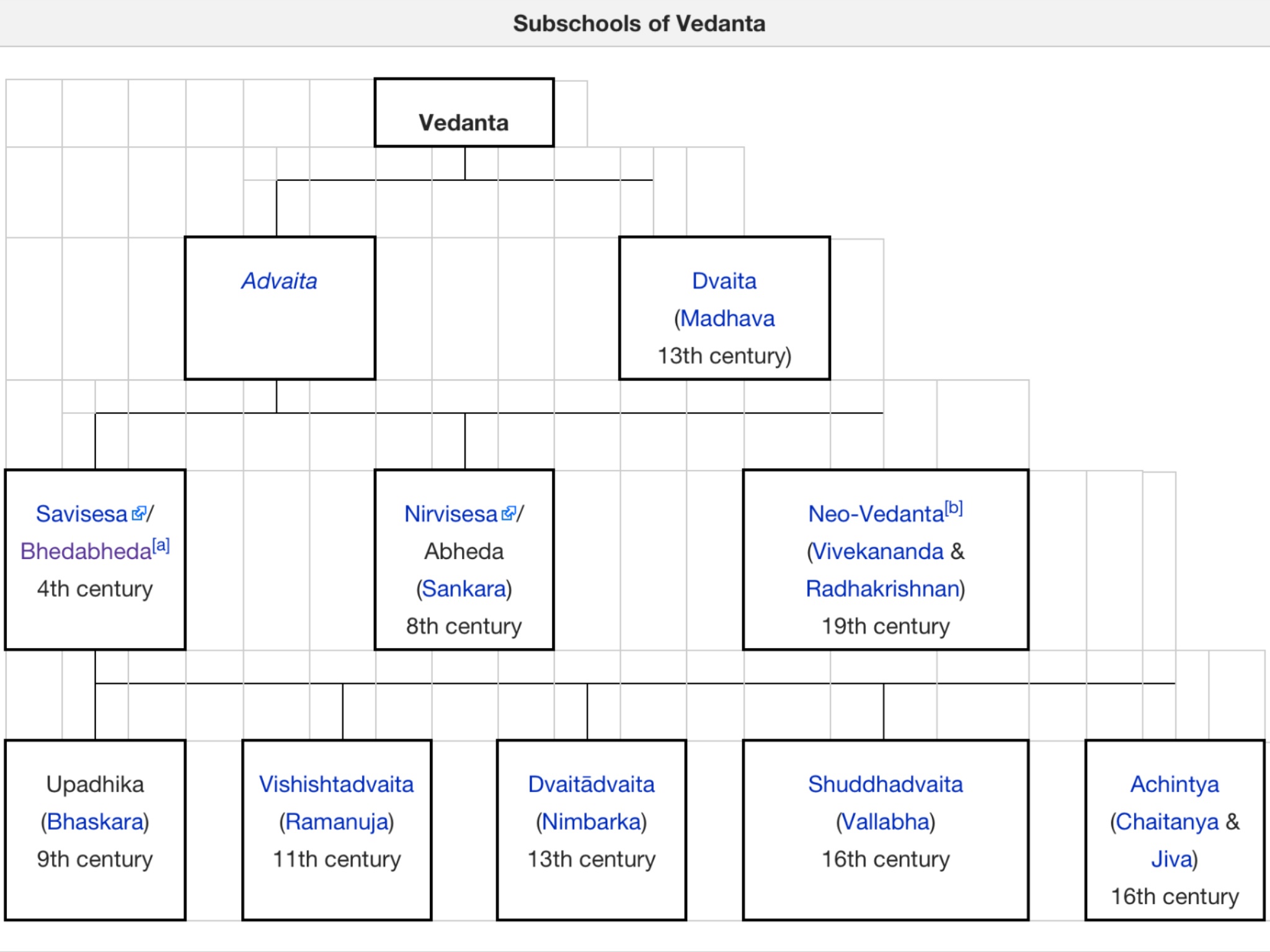 My guess is that the percentage is significantly greater than 95%, but have there been any statistics collected on this?

Reset to default
4
Want to improve this post? Add citations from reputable sources by editing the post. Posts with unsourced content may be edited or deleted.

If the question is about Hinduism at present, then I think it is faulty. Of the six Astika schools—Sankya, Yoga, Nyaya, Vaisheshika, Mimangsha, Vedanta, each which differed a little bit in their philosophy—are all dead except the Vedanta. Hence, Upanishad means Vedanta now. Later, various philosophies emerged from Vedanta, namely Advaita, Bishista advaita, Dvaita, Suddha advaita, Dvaita advaita, and Achinta Veda Aveda.

This later gave rise to present sects like Shaivas, Vaishnavas, Shaktas, Smartas, Vedics (who don't use effigies), and devotees of other Gods or Avtaars.

There is a different way of classification within Asktika i.e. those who accept the authority of vedas.

Astikas can be classified into 2 groups:

The primary difference between the 2 schools is the scope / role played by Guru.

In all vendanta based traditions reading/learning from text is sufficient. An acharya or Guru is a force multiplier or a mentor but not essential.

On the other hard in Agama based tradition initiation by enlightened Guru is essential. And they prescribe a very specific lifestyle and rituals for individuals and communities. For eg temples are central to Agamic lifestyle.

From the point of view of Agamas, Vedas are as "pure science" and Agama are "applied technology"

Majority of hindus, gurus and priests follow some vedanta/YogaVedanta tradition. Many priests whose earlier generations were practitioners of Agamic tradition now follow a vedantic tradition. Agamic traditions are harder to follow as it calls for specific "actions" to be performed which is much tougher to follow.

PS: the wikipedia gives an impression of Agamas vs vedas which is incorrect.

PPS: NeoVedanta school being started by Sri RamaKrishna and Swami Vivekananda is "incorrect" at best.

PPS: When AdiShankara when up to Kashmir from Kerala he was a vendatin but was initiated into Agamas by AbhinavGupta in Kashmir. Since then his discourses was based on Agamas (which also consider Vedas as supreme)

It is my understanding that Karma Kanda and Upasana Kanda are portions of Vedas where there is identity with specific Ishta Devata. In Vedanta the identity shifts to nature of self in this there are various schools of philosophy where in duality , monism etc are discussed as the nature of Self. So there cannot be a connection between shan-Matha and Vedanta

1
What proportion of present day Hindus are aware of Vedanta?
14
Does Ramanujacharya believe that inhabitants of Brahmaloka attain Moksha when they die?
9
Is there a Darshana/Philosophy based on Agamas?
11
Looking to learn about Hinduism?
11
Was the Purva mimansa an atheist school?
9
What scriptures describe swans separating milk from water?
9
Why does the Jiva reside in Brahman during deep sleep?
8
What scriptures discuss why the sky appears blue?
9
Whose commentaries on the Vedas and Upanishads are most followed?
8
What scriptures describe Brahma's son Sanatkumara being reborn as Shiva's son Kartikeya?
See more linked questions