Now many of you might say "Manu", but it's actually not quite clear from the text itself.

And second, the first line of Medhatithi's Manuscript of the Manusmriti says this:

The Great Sages, having approached Manu, paid their respect to him in due form, and finding him seated with mind calm and collected, addressed him these words—(1).

And the last verse:

The twice-born man who reads these Ordinances of Manu, shall be ever equipped with virtue and shall attain whatever state he may desire.—(126)

It's referring to Manu in the 3rd person, which means that Manu did not write the verses of the Manusmriti.

If you continue reading, you'll notice that the Manusmriti reads like a story with a certain narrator.

From scripture, we know that Valmiki wrote the Ramayana and Vyasa narrated the Mahabharata, which was penned by Ganesha.

But who wrote or penned the Manusmriti?

According to Medhatithi on this Manusmriti verse which talks about the nature of the Dharma Shastras, he says the words of Manu were recorded in an "unbroken lineage."

Which basically means this, according to Indologists: 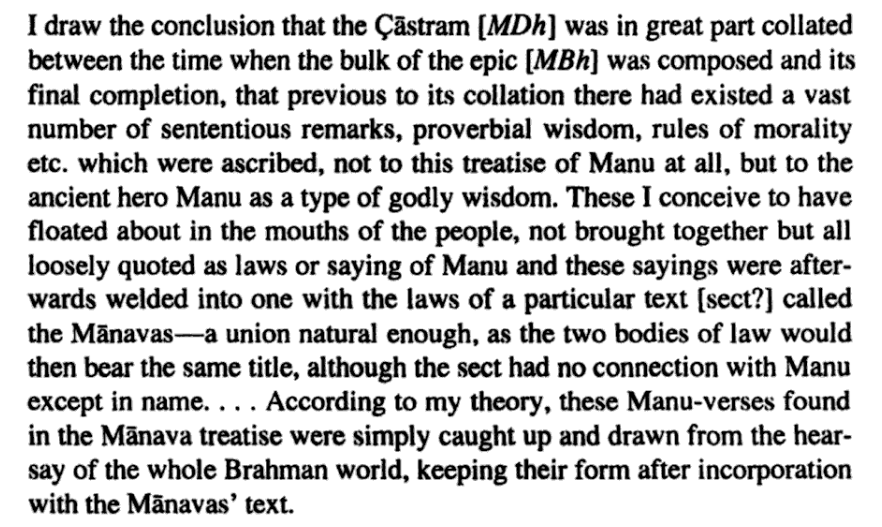 In that case, the narrator of the Manu-Smriti is Bhrigu Maharshi.

The last verse of the text reads:

Additionally, if you look at the ending colophon of every chapter in the Manu-Smriti, it says:

To be clear, the Manu Smriti is a smaller portion of the Bhrigu Samhita that is authored by Bhrigu. It is not clear if Bhrigu quotes Manu verbatim or whether he is paraphrasing / summarizing / rewording the content of what Manu spoke. This is not very different from the Bhagavad Gita (words of Krishna) appearing in the Mahabharata (written by Vyasa).

Manu Smriti does not mention whether the laws are composed by someone or not. It is somewhat addressed in the following verse from Parashara Smriti:

Since Veda's authorlessness and Manu's recalling of the laws are mentioned together here, this is, IMO, hinting towards the fact that the laws are eternal as well in nature and eventually of a divine origin.

And, Manu simply does the job of recalling the laws which were sprouted from God.

Also, we have the following verse from Yajnavalkya Smriti's 1st chapter:

The exact word used in the Sanskrit original is DharmashAstrayojakA and not DharmashAstra rachaitA (which means authors of the Dharma Shastras).

Various meanings for the word Yojaka can be found from a dictionary and are as follows:

So, it seems they (including Manu) were not the authors of the respective texts but mere compilers/arrangers of the laws which eventually has a divine origin.

Manu Smriti itself shows the "divine" nature of the laws contained there in.

Needless to say, Bhrigu, who was the son of Manu, was not the author of Manu Smriti.

Manu Smriti 1.57. Thus he, the imperishable one, by (alternately) waking and slumbering, incessantly revivifies and destroys this whole movable and immovable (creation)

1.58. But he having composed these Institutes (of the sacred law), himself taught them, according to the rule, to me alone in the beginning; next I (taught them) to Mariki and the other sages.

1.59. Bhrigu, here, will fully recite to you these Institutes; for that sage learned the whole in its entirety from me.

The imperishable one composed the laws - this shows the divine nature of the laws, as was also evident from Parashara's quote which says Manu simply recalls them

Also, what Bhrigu was doing is simply narrating the laws. He was not the author of the laws.

According to tradition, Svayambhuva is regarded as the author of the Manusmriti. He was the first Manu among the fourteen Manus in this Kalpa. He was born from Brahma. That is why he was known as Svayambhuva. He was married to Brahma's daughter Shatarupa.

Not the answer you're looking for? Browse other questions tagged dharma-shastras manu-smriti manuscripts .

10
Is the Manusmriti written to favor a particular Varṇa?

8
Is it permissible to deny the authority of Manusmriti?
7
Is there any verse or historical evidence suggesting that manusmriti is more authoritative than other smritis?
2
Manu Smriti contradicts Bhagavad Gita on qualities of women?
3
Does Manusmriti (or similar works) prescribe punishments for Brahmins who propagate scripture to the undeserving?
10
Is the Manusmriti written to favor a particular Varṇa?
4
What are the quotes, from various scriptures of early Vedic times to early medieval times which define the term Mlecchas as distinct from Brahmins?