Sannyasa is BELIEVED to be the so called "fourth stage" of life, i.e after brahmacharya, grihastha, and vAnaprastha. However, when one has ALREADY moved to the forest in seclusion after retiring from household duties with wife. What is there to be renounced and for what?

Sannyasa (most popular is dashanaami tradition of sankara), for many of those who do not know, involves renunciation of or giving up

some other sanyasa sects have a little different requirements from above but many of the core processes are same.

kAlidAsa when talking abt various stages in life of the raghu clan says,

Learn all vidyAs in childhood, indulge in youthful pleasures in youth "involve in munivRtti" in old age & at last quit the mortal coil by way of yoga. This is what ordained for everyone

‘In the world, one should desire to live a hundred years, but only by performing karma. Thus, and in no other way, can man be free from the taint of karma.’ (Isha upanisad 2)

The Taittiriya Brahmana has it that to extinguish the agnihotra fire is to earn the demerit of killing a hero.

While vedas preach self realization in tune with the nature and prescribe brahmacaryaM, grihastham, shikhaa, sacred thread, progeny, etc , if a an individual or a system , renounces all these , do we call it vedic or avedic, so is the answer..

Vedas start with "Agni meele purohitham" and glorifies Agni and

Sannyasins after death are buried under the ground rather than offering the body to the agni.

1) can the same vedas suggest a life that sheds this very agni?

All the RShi-s including the saptaRShi-s were establishers of their respective gotra-s which means they led a family life. If indeed there existed something called renunciation of shikhA, kaccha, yajJopavIta, agnyupAsanA and one's own wife,

2) someone kindly provide proof that these great mahariShi-s did that?

When asked about reference of sannyasa or renunciation from the vedas, the vedantins usually cite the verse from munDaka upanishad to support their claim,

Then a question arises so as to what is the exact meaning of sannyasa? From Vedic point of view,

3) Then how can saMnyAsa be derived as "renunciation" ?

it can only mean the upAsanA of hiraNyagarbha

Then there is also a conception that "yati" also necessarily means sannyasin or renunciates. However,

A sanyAsi can be a yati but a yati need not be a sanyAsi. People believe that yati = sanyaasi. yati is one who has restrained his mind and body. Even a gRhastha for that matter is restrained in his mind and body if he sticks to his dharma. Moreover, the word yati is actually derived as "yatate iti yatiH". i.e. one who puts effort. in that case, the word yati would aptly fit only a karmayogi and not a sanyAsi who says he has renounced karma.

Another such word is parivraja which is usually considered synonymous with sannyasa. However it only means a wanderer and not someone who has renounced everything. A wanderer may or may not be a sanyasin.

I am also aware that there are texts which are called sannyasa upanishads which are followed by them for their sannyasa and code of conduct. However, they are not authentic in the sense that they are not the part of vedas. I have also posted a question about these here. This includes like of jabaala upanishad, kaivalyopanishad and so on.

If someone likes to provide any authentic reference then I would like to ask,

4) Is there any reference of sannyasa ashrama as a life style in vedas? (the word sannyasa in mundaka upanishad does not speak about ashrama but sanyasa as an upasana of lord brahmaa to attain brahmaloka)

Note: By Vedas I am expecting direct reference from vedas i.e samhitas. And also from aranyaka, brahmana, and ten authentic upanishads. Also grhya and shrauta sutras.

P.S: Please provide the references in moola shlokas with translation and not commentaries by mutt people like gambhirananda, nikhilananda etc.

I am referring to Rig Vedic mantras alone, which are the oldest and considered to be apaurushEya.

The definition of Sannyasa was already elaborated by the OP. Hence, I am not reproducing similar content here.

The Rig Vedic mantras were composed by the Sages. They prayed, apart from wealth, for children also.

Let us examine a few of them.

Knower of all that lives, O Agni may we both, singers of praise and chiefs, be in thy keeping still. Help us to wealth exceeding good and glorious, abundant, rich in children and their progeny.

Ye whom religious men have firmly planted; thou Forest Sovran whom the axe hath fashioned,— Let those the Stakes divine which here are standing be fain to grant us wealth with store of children

So the sages of Rig Vedic period did not think that for attaining SPIRITUALITY, marriage and children are hindrance.

Is sannyasa a Vedic way of life? Is it recommended by the Vedas?

I am answering only this question.

Since it is not possible to answer the question without going through all the 4 Vedas, and since I have not done so either, I am quoting the opinion of a scholar who has done so.

Let me first introduce the author from whose book I'll be quoting.

Currently, he is also the director of the "Sri Aurobindo Kapali Sastry Institute of Vedic Culture".

Is Professor of Electrical and Computer Engineering, Emeritus at Purdue University, USA and also director of the Sri Aurobindo Kapali Sastry Institute of Vedic Culture

He has translated all the 4 Vedas (into English and other Indian languages), besides writing various books on Vedas, Upanishads, Brahmanas etc.

I will be quoting from one of his books called "Essentials of Atharva Veda".

12th Chapter of this book is titled "Family Life". Quoting from a sub-section of this Chapter:

Marriage was not regarded as an impediment to spiritual progress. Most of the great teachers of the Vedic age, the rishis, were all married. The theory of three-fold debt (rna) is indicated in TS 6.3.10 namely the debt to the Gods, rishis and ancestors.

AV 6.118 and 6.119 stress the importance of clearing all debts (rna) or promises made to human beings or to the deities. There were some ascetics or wondering monks called vrAtya in the Vedic age; but the ideal of external renunciation i.e giving up the home and leading a wandering life is not mentioned. The close connection between developing spiritual powers and leading the life of external renunciation is a buddhist and post-Buddhist development. 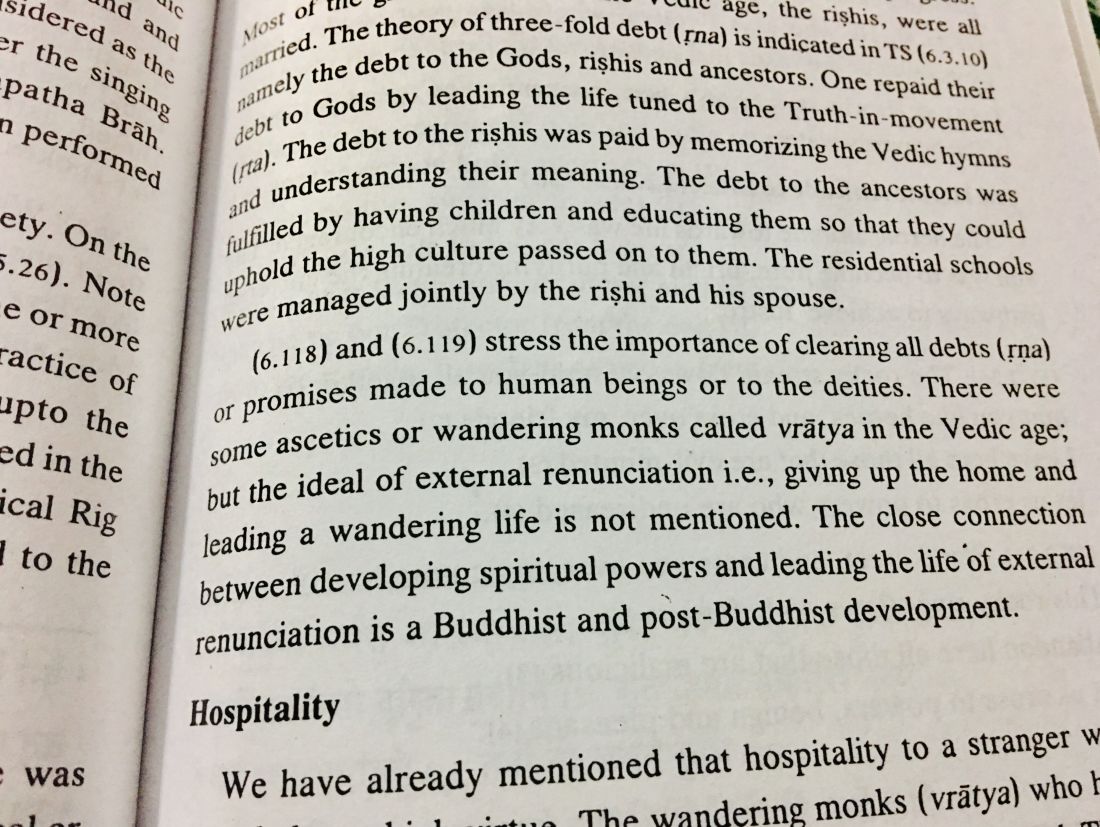 So, a full-fledged external Sannyas, where Viraja Homa and other rituals are performed, where the sacred thread, and the ShikhA are cut, is not found in the Vedas proper.

So, if you agree to consider those minor Upanishads as Veda too only then the concept is Vedic otherwise not.

The idea that sannyasashrama is not sanctioned by the Vedas is an old idea held even by famous Rishis like Gautama and Bodhayana:

There is, however, only one order of life [Ashrama] according to the venerable teacher, because the householder's life is expressly prescribed.

Because he says some people, he shows he doesn't agree with this.

Even during the time of Ramanujacharya, there were some people who did not believe that sannyAsAshrama is enjoined by the Vedas. The scholar Yadavaprakasha, who was originally a teacher of Ramanujacharya but later became his student and converted to Sri Vaishnavism, wrote a treatise called the Yatidharma Samuccaya, which is a manual for sannyasis, and is even followed today by sri vaishnava sannyasis. In the first chapter, he establishes the Vedic support for sannyasa ashrama. He presents the opponent's position, and rebuts it by citing from the authoritative Mahanarayana upanishad:

There is an exclusive observance known as the yoga of knowledge. The following vedic text, accordingly, notes at the outset the rites beginning with "truth" and ending with "mental", and goes on to prescribe renunciation: "They say that renunciation [nyAsa], therefore, surpasses these austerities" [nyAsa iti brahmA...], and finally enjoins the yoga of knowledge as what is expressed by the term renunciation [nyAsa]: "One should attach oneself to the self".

However, other sri vaishnava acharyas interpret this entire passage, which they call the "Nyasa vidya", as referring to Sharanagati/Prapatti, or surrender to Lord Vishnu for moksha.

For example, the 17th or 18th century Sri Vaishnava scholar Ranga Ramanuja has commented on this passage in the Upanishad and said:

Then, in chapter two, Yadavaprakasha cites a bunch of various smriti verses and verses from minor upanishads like the Jabali upanishad that mention various rules and pre-requisites for sannyasa. In short, they call contradict each other and even oppose each other.

In any case, even though sannyasashrama is not mentioned by any currently available vedic text, there are dozens of dharma shastras and puranas that mention this ashrama, and dharma shastras and puranas are directly based on the Vedas since their authors based their contents on the Vedas, so from this we can infer that the authors of these smritis were aware of Vedic texts during their time that mentioned sannyasashrama.

So although sannyasashrama may be enjoined by the Vedas, Grihasthashrama is more emphasized.

Not the answer you're looking for? Browse other questions tagged vedas upanishads vedic-rituals sannyasa grihya-sutra .

3
Why do sanyasa scriptures degrade women?
6
Ancient rishis were married, was sanyasa invented by Buddhists and Jains?
6
Why aren't all works whose authors are not known regarded as authorless (apauruṣeyā)?
5
Which verse of taittiriya brAhmana talks of extinguishing agnihotra fire as sinful?
2
Do Vedas forbid Sannyasa in Kali Yuga?
1
What is the Vedic definition of Sannyasa?

2
Were the mantras of the Isha Upanishad ever used in Yagnas?
16
Are Upanishad's really parts of the Vedas?
10
Do 'stray thoughts' incur karma?
4
Can Sanyasa be given to non-Hindus?
8
Does kanyadaan have a Vedic sanction?
1
What is the Vedic definition of Sannyasa?