Is the Big Dipper or Ursa Major constellation connected with the Saptarshis?

Is the Big Dipper or Ursa Major constellation connected with the Saptarshis? I remember a childhood story to that effect.

Yes the Saptarshi Mandal (the station of the Sapta Rishis) is regarded as the Great Bear.

The God Himself has made the Naksattra Abhijit to revolve round the Meru, along with the other Naksattras in the Zodiac; so this is reckoned as the twenty-eighth Naksattra. The planet Venus (S’ukra) is situated above the Moon two lakh Yoyanas high. He sometimes goes before the Sun, sometimes behind and sometimes along with Him. He is very powerful. His motion is of three kinds :-- (1) S’îghra, (2) Manda, and (3) uniform. He is generally favourable to all the persons and does for them many auspicious things. So it is stated in the S’âstras. O Muni! S’ukra, the illustrious scion of Bhrigu, removes the obstacles to the rains. Next to S’ukra, the planet Mercury (Budha) is situated two lakh Yoyanas high. Like S’ukra, he, too, goes sometimes in front sometimes behind and sometimes along with the Sun. And his motion too, is of three kinds :-- S’îghra, Manda, and uniform. When Mercury the Son of Moon, is away from the Sun, then Ativâta (strong winds, hurricanes), Abhrapâta (the falling of meteors from the clouds) and draught and other fears arise. The planet Mars, the son of the Earth is situated two lakh Yoyanas higher. Within three fortnights (45 days) he travels one Râs’î. This occurs when his motion is not retrograde. This Mars causes all sorts of mischief, evils, and miseries to mankind. The planet Jupiter is situated two lakh Yoyanas higher. He passes through one Râs’î in one year. When his motion is not retrograde, he is always in favour with the Brahmâ Vâdis. Next to Brihaspati, come the planet Saturn, the son of the Sun, two lakh Yoyanas higher. He takes thirty months to pass over one Râs’î. This planet causes all sorts of unrest and miseries to all. Therefore He is called a Manda Graha (a malefic planet). Next to it, is situated the Saptarsi mandala, the Great Bear, eleven lakh Yoyanas higher up. O Muni! The seven planets always do special favours to all. These circumambulate the Visnupada, the Polar Star.

Yes, even today some Indian married couple after marriage, go out and see the binary star couple Arundhati-Vashishta, Alcor-Mizar of Saptrishi constellation. This was explained by Baba who preaches at Shri Shri today 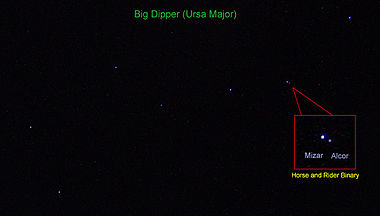 Thousands of years ago the ancient rishis could identify two tiny spots in 7 stars- Saptrishis in the sky as a twin star system. They named it Arundhati-Vasistha.

The pair is considered to symbolize marriage. Vashistha and Arundhati were a married couple. Arundhati and Vasistha were considered an ideal couple, symbolic of marital fulfillment and loyalty.

During the marriage ceremonies of Hindus, one of the ritual is the groom shows the bride the double stars of Vasishta and Arundhati.

In some Hindu communities, priests conducting a wedding ceremony allude to or point out the constellation as a symbol of the closeness marriage brings to a couple. Secret behind watching/pointing the stars

In most twin stars system one star is stationary and other rotates around it, while Arundhati and Vashishtha both rotate in synchrony.

To tell that both husband and wife must do all things in sync and that husband must not rotate round the wife or wife should not dance to the tune of her husband, this ritual was made a part of the marriage ceremony. The greatness of our ancestors / scholars was that they could know that such a twin star system exists and how they rotate even without the telescope. A point to be noted Women in India had a higher stature in society. Its Arundhati-Vashistha and not Vashistha-Arundhati. Women had higher respect than men.

Not the answer you're looking for? Browse other questions tagged saptarshi .

Like any library, Hinduism Stack Exchange shares great information, but does not offer personalized advice, and does not take the place of seeking such advice from any Acharya, Pundit, astrologer, Guru or other trustworthy Counselor.
Blog
Featured on Meta
Visit chat

7
Who were the seven rishis called Chitrashikhandins?
2
What are the names of adityas and saptarshi?
3
Is there any mantra that addresses the Saptarishi?
7
Clarification about Saptarshis of Vaivasvat Manvantar
8
What does it mean when it's said that an entire Vedic Sukta was revealed to the Saptarishis?
2
From which dimension of existence did Matsya take the Sapatarishis? And to where?