Why does Lalitha Devi sit on Shiva?

Is Shiva really the āsana for Lalitha Devi? How to understand this? Who is her consort? If Shiva is her consort, why did she make him an āsana? 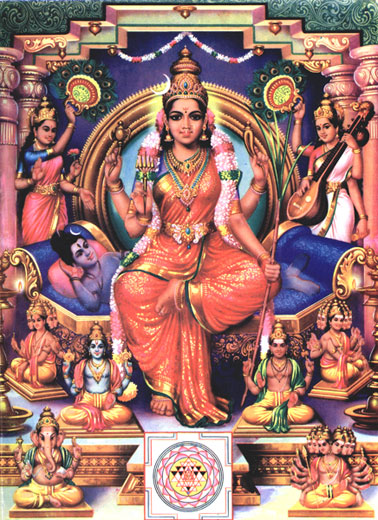 Lalitha Sahasra Nama is the best answer for all your questions here. She is Shrichakra Raja nilaya- Lalitha Devi, the divine mother. Let me give the answers based on the picture above.

Rama (Lakshmi) and Vaani (Saraswathi) are said to do her seva with chamara (fans).

The two weapons in her upper right and left hands are to cut the worldly desires in out heart and bring us to her feet. The weapon in the lower right hand is the ankusha which is used to poke us and remind us to come back to her feet, like a mahout pokes the elephant and teaches it discipline. The sugarcane in her lower left hand is not exactly a sugar can but is a bow made of sugar cane. This was manmadha's bow before he died. The bow is made of sugarcane, its string from bees and the arrows made from flowers (pushpa baana) used to shoot at people to make them fall in love to continue the population. After manmadha's death, mother took it into her hands and became Shri Kameshwari.

The 5 brahmas sitting at her feet are actually the legs of her throne and these 5 brahmas are Brahma, Vishnu, Rudra, Ishwara and Sadashiva. These five become motionless without Shakti(her).

The two sitting at her feet in the front are her sons Kumara and Ganesha.

She is not exactly sitting on Him but it represents that she is Shivaa- the female or the energy of Shiva. Both are complete only when both are together and thus she forms Lalithambika.

That Chakra is our heart in a logical sense (I heard that our heart has the same number of grooves as the Chakra Raja has and the dot in the center is the divine mother). She sits in our heart and rules us and always takes care of us and takes us into her at the end.

On who is the consort of Lalita:

Sri Lalitopakhyana is a part of Brahmanda Purana. It details the Avatara and Lila of Parashakti Lalita Mahatripurasundari. The Parayana of this sacred text is considered to be more fruitful than even Saptashati. A single Parayana of this great text confers a merit, equal to thousand (Sahasra) repetitions of Chandi.

The 11th verse of that stotram is:

Your sport is the creation of the world , your friend is the pure Lord Shiva, You take the everlasting happiness as food and live forever in the heart.

Also Lalita Sahasranama describes Lalita as Sadashiva Pativrata (the devoted wife of Sadashiva) and also as Gurupriya or the consort of Shiva,the great Guru.

On the significance of the Pancha Deity seat:

So with all the care possible, the Lady of the Universe is to be worshipped and served. Men should avoid worshipping any other gods, as people avoid the husk to get the grain inside. O King! By churning the ocean of the Vedas, I have got the jewel as the lotus-feet of the Parâ S’akti; and I think that I have discharged all my duties and think myself satisfied and successful. Brahmâ, Visnu Rudra, and Is’vara are the four feet and Sadâ S’iva is the plank overhead; thus these five form the seat on which the Devî is seated. There is no other deity superior to Her. To show this (to the ordinary ignorant people) the Mahâ Devî has taken this seat composed of the five Brahmâ, Visnu, Rudra, Is’vara and Sadâ S’iva. Superior to these five, what is stated in the Vedas as Vyaktam and in which all this Universe is sewn, as it were, crosswise and lengthwise, lying in and through, that is Bhuvanes’varî, the Goddess of the Universe.

So,Sri Lalita's 5-Deity seat demonstrates and emphasizes the fact that there is no Deity who is superior to Lalita. Lalita's supremacy is unquestionable.

From the Lalita Sahasranama stotram:

She who carries a sugar-cane bow with the determination of materialising the universe with Her lower left hand, while actually taking up the deed of creation with the aid of Five Tanmatras or elements by another hand of herself.

Here the sugarcane bow symbolizes the mind from which arises the desire to create the entire creation.

Lalita holds five flowery arrows, noose, goad and bow. The noose is attachment (moon). The goad is repulsion (sun). The sugarcane bow is the mind. The flowery arrows are the five sense impressions. When consciousness perceives these, the outward directed arrows stop being dry sticks.

On why Sadashiva is lying down and not sitting up

That's why he is being shown as lying down .

Shakti is triple as wake-dream-deep sleep. What is called the Fourth is the witness, Shiva, who is said to pervade the whole cosmos just as heat pervades a red hot iron.

Lalita, as primordial devi, rays out her attendants and shaktis as modifications of moon, sun and fire. In this Shiva has no place, no qualities, is without the ability to act. Only when united with devi may 'he' act.

This is based on the subtle and practical idea of Shiva as pure consciousness, witness of the triple manifestation of his Shakti. This Shakti, the very essence of the three gunas of Sattvas, Rajas, and Tamas, is the cause of all manifestation in the universe and as a human being. The three shaktis, by blending and reblending, create all things

As per Shakta scriptures, Prakriti herself is Supreme Brahman. This is explained in Vidya Geeta from Tripura Rahasya(a Shakta text)

Thus besought, the Goddess of ultimate knowledge began with great kindness to explain it clearly to the sages: "My concrete form is the eternal couple - the Supreme Lord and Energy - always in undivided union and abiding as the eternal consciousness pervading the three phenomenal states of waking, dream and sleep, and reclining on the cot whose four legs are Brahma (the Creator), Vishnu (the Protector), Shankar/Rudra(the Destroyer) and Isvara (Disappearance) and whose surface is Sadasiva (Grace) which is contained in the mansion known as 'fulfilment of purpose' enclosed by the garden of 'Kadamba' trees in the jewel island situated in the wide ocean of nectar surrounding the cosmos and extending beyond."

Share
Improve this answer
answered Nov 18 '15 at 8:46
user3870user3870
8
|  Show 3 more comments
0
Want to improve this post? Add citations from reputable sources by editing the post. Posts with unsourced content may be edited or deleted.

1st we should remember Goddess Lalita herself is Parvati Goddess lalita always sit on her husband (lord shiva) Being supreme Adiparashakti, without her lord Shiva is nothing he is like shava

Shiva and Lalita are same one , they never separable even she is also called Tripura sundari most beautiful in all 3 lokas, Goddess Lalita commonly sit on lord Shiva lap , lord shiva is everything for her .

Not the answer you're looking for? Browse other questions tagged shiva shakti brahmanda-purana lalita .

21
Who are Pancha brahmas' Lalita Devi sits on and Why are they called so?

8
Why Devi Tara is shown standing over Shiva?
13
Why and how did Lord Shiva fall in love with Mohini?
9
Shiva and some apsaras?
5
Where is it mentioned about sister of Lord Shiva in religious texts?
8
How are gods and goddesses such as Shiva and Shakti seen in the Vaishnava sampradayas?
6
Is the form of Devi complete in herself? Does she need Purusha to become complete?