What does this Rig Veda verse mean about the fivefold human race?

Indra who rules with single sway men, riches, and the fivefold race of those who dwell upon the earth.

What is fivefold race referring to?

I think it's referring to Brahmanas, Kshatriyas, Vaishyas, Shudras, and Mlecchas, because humanity can be divided into Vedic humans and non-Vedic humans.

Indra who alone rules over men , over riches , and over five (classes) of the dwellers on earth. (H.H.Wilson)

The the sanskrit word used in the mantra for fivefold race is "Pancha kshitinaam - पञ्च क्षितिनाम् " .

Your question asks what this "fivefold race" is referring to.

And yes, your guess is correct about the word Pancha kshitinaam. Here is what H.H.Wilson explains about the word with the commentary of Sayanacharya.

The text has over the five men or classes of men, Pancha kshitinaam. The latter term is explained etymologically as those who are fit for habitations (Nirvasarhanam). The phrase is not of infrequent recurrence, and is usually said to imply the four castes: Brahmanas, Kshatriyas, Vaishyas and Shudras, and Nishadas, barbarians or those who have no caste; [referring], possibly, to the aboriginal races of India, all in a very low stage of civilization, like the Gonds, koles and Bhils of present day.

Here is what Pandit Shree Ram Sharma Acharya in his translation of Rig-Veda is saying . According to him also the word Pancha kshitinaam is used for five classes of men.

But apart from that the word is having another meaning and according to some scholars is used in different contexts than above.

First of all let's see what the Arya Samaj translation is telling us about the meaning of the word.

We can read Swami Dayananda's translation here .(Page. No. 122 )

The above theory is also mentioned by another author M. P. Pandit in his book Wisdom of the Veda.

In his translation the author is using the word five planes for Pancha kshitinaam.

Indra who alone disposes all actions and possessions of the five planes .

This is his explanation.

Indra the power of the divine Mind is the sovereign of the being of man on all its planes of existence. Man is not merely his physical body. Exceeding his physical existence, in his life organisation; above that is his mental consciousness ; higher are the realms of the light of knowledge and still above are the regions of blissful Transcendent, the parardha. Movement in all the five planes of being, the five earths of veda, are controlled and disposed by Indra.

So these Pancha kshitinaam is five planes which are above his physical body which are above each other and each is excellent than the below one are the five earths in vedas.

Conclusion - : So from all the translations above we can say that the word Pancha kshitinaam has two different meanings. One is five classes of people i.e. Brahmanas, Kshatriyas, Vaishyas, Shudras, and Nishadas. And the other one is deeper and associated with our own koshas or sheaths, which are called prithvi lokas in vedas. As five earths, here one earth is human body and these five earth planes are above the physical body i.e life organisation, mental consciousness, light of knowledge and blissful Transcendent. 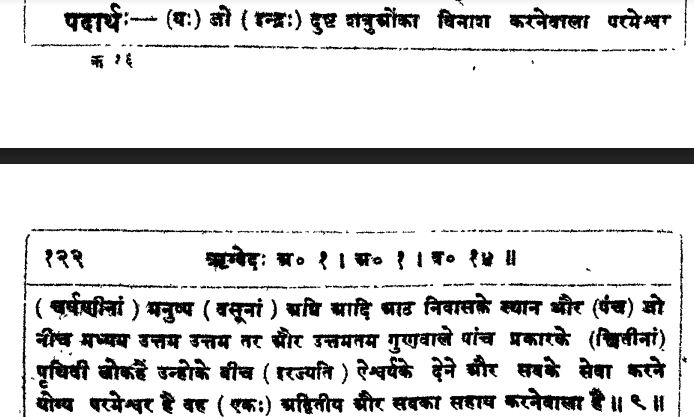 The above answer provided by SwiftPuskar is good enough based on existing literature. Here I would like to explain meaning of two words mentioned in RV 1.7.9 - 'carSaNi' and 'KSiti'.

The meaning of 'carSaNi' is cultivation ( see Spokensanskrit.org/ dictionary) and 'KriSti' stands for cultivator in RigVeda. Thus the meaning of first line could be stated like this - Indra is the only ruler who govern all settlments of cultivation.

The second term 'KSiti' stands for horizon, arena, area etc as this term also appears in other verses which supports this meaning (e.g. 'gairiKSitasya' in R.V. 5.33.8. Here Gair is a place name ). Thus the meaning of second line could be stated like this - Indra's governing extended into five different horizons,areas.

With great respect to Swami Dayanand's explanation, it could be said that he was interpreting RigVeda from a spiritual point of view not from historical point of view.

4
Where is this hymn in the Rig Veda?
6
What does the Rig Veda say about the forests and healing properties of plants and animals
5
Who are the dark-coloured inhabitants in this Rig Veda verse?
4
Does Rig Veda 10.59.7 talk about rebirth?
0
Where is the verse(s) about Sāvarṇi (a name of the first human) in the Ṛgveda (Rig Veda)? Who are Sāvarṇya and Saraṇyū?
5
Who does "sons of Bharatas" refer to in this Rig Vedic verse?