What exactly is shuddha sattva according to vaishnavism?

Is there a shuddha rajas and shuddha tamas also? Please explain.

Yes there is concept of Suddha Sattva (शुद्ध सत्व ) in Vaishnavism . This and other concepts like Sattva Shunya (devoid of Satva ) and Mishra Sattva (mixed purity ) is found in book Tattva Traya" or Aphorisms On 3 Varieties Soul Matter" by Sri Pillai Lokacharya (1205–1311 CE) was a prominent Sri Vaishnava leader and philosopher who authored several works important to Vishishtadvaita philosophy. The terms are explained in Part 2 - Achit-Prakarana -Tatva Traya is aphorisms on three varieties of constitution of things.

This is what Lokacharya is defining essence and qualities Suddha Sattva or pure substance in part 2 - aphorism 3.

3 Pure Substance is that -:

(a ) Which is seat of the quality of purity alone ; without admixture of any of other quality.

(b) Which is eternal ,i.e. without beginning or end ,in time.

(c) Which is productive of knowledge and bliss.

(e) Which is infinitely bright.

(f) the extent of which can not be defined even by released soules , by the external Angels, and by God Himself.

(g) Which is inexhaustible wonders and never grows stale

Below is another translation by Satyamurty Ayyangar . (This is pdf pls. see page 53)

Here are the excerpts of aphorisms explaining Suddha Sattva or pure substance.

77-78 : We now pass on to a study of the characteristics of "Achit" the non -sentient matter, the second of three Tattvas or (entities ) , referred to at beginning of the section 1.

The non-sentient things are totally devoid of knowledge (Guna -Shunya) and liable to change of state (Vikarspada) , just the antithesis of chit (sentient Beings) , characterised by knowledge and non changeability . Achit is of three kinds namely 'Pure Sattva' , ' Mixed Sattva' and Sattva Shunya (totally devoid of sattva) , that is to say those are which are based solely on Sattva (purity) , those based on admixture of all the three gunas (Sattva ,rajas and Tamas)

79-84 : In the first category of things Viz. ' Suddha Sattva' , or pure Sattva is the supreme heaven . It is unatained by 'Rajas' and 'Tamas' cf Rajasah Parake (रजस: पराके) Tamsastu pare (तमस्तु पारे ), Tamsa paras-tat (तमस: परस्तात ).It is eternal ; it is productive of knowledge and bliss. It does not come into as result of ' karma' or actions of the sentiental beings and the possession coverted by them . But it is projected solely by the will of the Lord for his enjoyment. , in the form of towers and terraces , halls and mansions of limitless splendour.

Summery - According to Sri Pillai Lokacharya there are three matters Chit ,Achit and Ishvara. Chit = Jiva , Achit is Prakriti or the things which are bhogya or to be experienced. And Ishwara is the antaryami parameshawara. This concept is based on model Bhokta , Bhogya and Prerit Brahman (प्रेरित ब्रह्म). These three substances are eternal , but first two although independent are bound by ishvara and are not different than ishwara. The first two substances are the body of Ishwara , because ishwara is contained in both. Its impossible to think about Nirguna .And that is why ishwara is Saguna only. And this Suddha Sattva is brahman according to Ramanuja.

In the similar way Gaudiya Vaishnava concept of Krishna as Suddha Sattva is there because he is beyond Vikara , beyond Sattva ,Rajas and Tamas and is not affected by Maya. This is Suddha Sattva concept in vaishnavism. 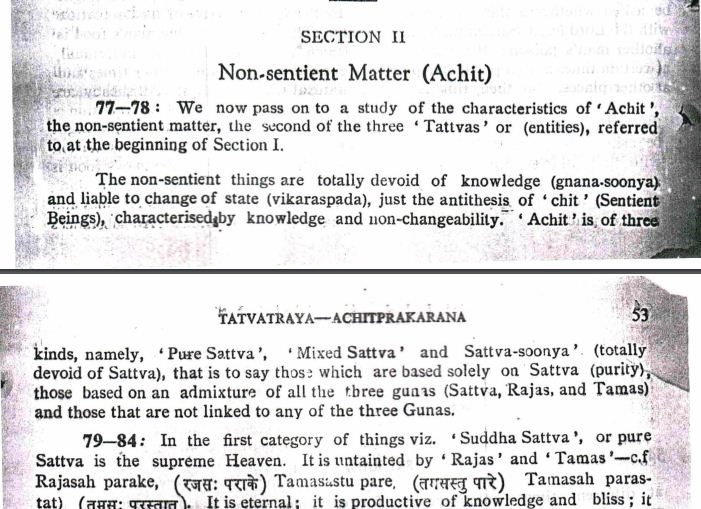 21
What is the difference between Thenkalai and Vadakalai sects of Sri Vaishnavism?
5
What exactly are Pancharatra texts?
5
According to Sri Vaishnavism, what happens to someone who worships someone other than Lord Vishnu as Brahman?
7
Which scripture talks about avatara of Srimad VallabhAcharya?
3
What is Vishnu's body made of according to Vaishnavism and Advaita?
4
Where in the Garuda Purana is it said that only three Vaishnava Puranas are authoritative in Kali yuga?