What are the expansions of Lord Sri Krishna from the gaudiya vaishnava (ISKCON) point of view?

I need an answer only from the gaudiya vaishnava (ISKCON) point of view. I want to know all about the Lord's expansions from the first (Balarama), to the chatur vyuhas, to the secondary chaturvyuhas and so on.

Kṛṣṇa appears in three forms in his abodes beyond the material world: svayaṁ-rūpa (essential form), tad-ekātma-rūpa (forms which are nondifferent from it) and āveśa-rūpa (empowered forms).

That form which is not dependent on others is called the svayaṁ-rūpa LB 1.1.12

Krishna as the cowherd in Vrindavana is the svayam rupa.

Tad-ekatama rupa is defined as follows:

That form which is non-different from the svayaṁ-rūpa but appears to be different because of differing shape, activities etc., is called tad-ekātma-rūpa. That tad-ekātma-rūpa has two forms: vilāsa and svāṁśa LB 1.1.14

Tad-ekatma rupa is divided into two categories: vilasa and svamsa.

That form which is different from the original form for performing different pastimes and which is very slightly less in qualities is called the vilāsa form. LB 1.1.15

Definition of svāṁśa: That form which is similar to the vilāsa form but manifests fewer powers than the vilāsa form is called svāṁśa. Examples are the forms of Saṅkarṣaṇa and Matsya in their abodes in the spiritual world LB 1.1.17

Avesa form is defined as follows:

Definition of āveśa: Exalted jīvas empowered by the Lord with portions of his powers such as knowledge are called āveśa forms. LB 1.1.18

They are of two types: primary and secondary.

When Svayam Rupa manifests into many forms like when he is different gopis like Radha, Chandravali or Rukmini etc, it is called prakasa.(not to be counted in tadekatma or avesa).

The prakāśa forms of Kṛṣṇa are not considered among these types (tadekātma- rūpa). They are non-different from the svayaṁ-rūpa. LB 1.1.20

“When the Lord married 16,108 wives at Dvārakā, He expanded Himself into many forms. These expansions and the expansions at the rāsa dance are called prābhava-prakāśa, according to the directions of revealed scriptures CC Madhya 20.168

“If one form or feature is differently manifested according to different emotional features, it is called vaibhava-prakāśa. CC Madhya 20.171

“The first manifestation of the vaibhava feature of Kṛṣṇa is Śrī Balarāmajī. Śrī Balarāma and Kṛṣṇa have different bodily colors, but otherwise Śrī Balarāma is equal to Kṛṣṇa in all respects

“An example of vaibhava-prakāśa is the son of Devakī. He sometimes has two hands and sometimes four hands" CC Madhya 174-175 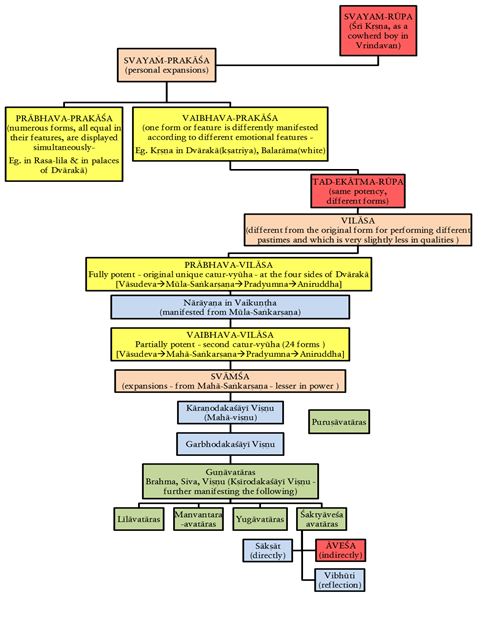 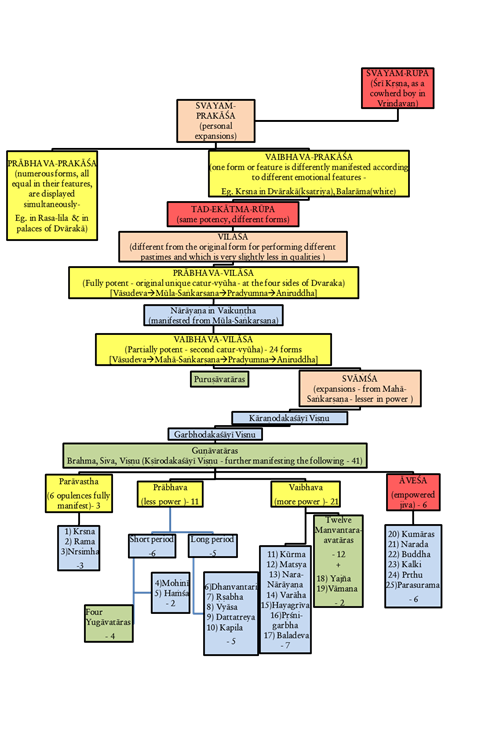 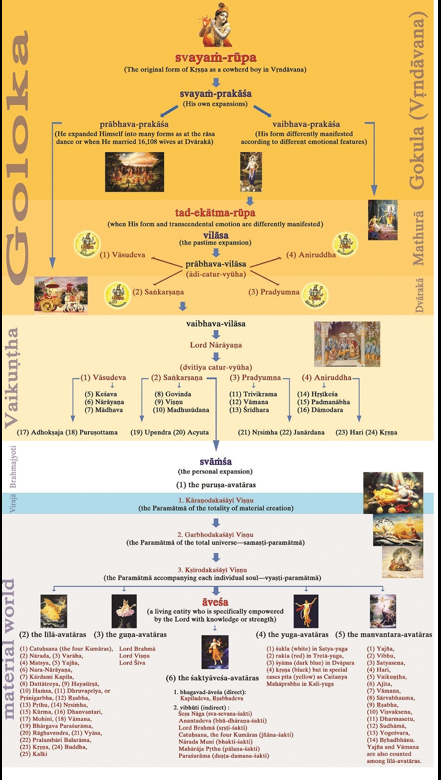 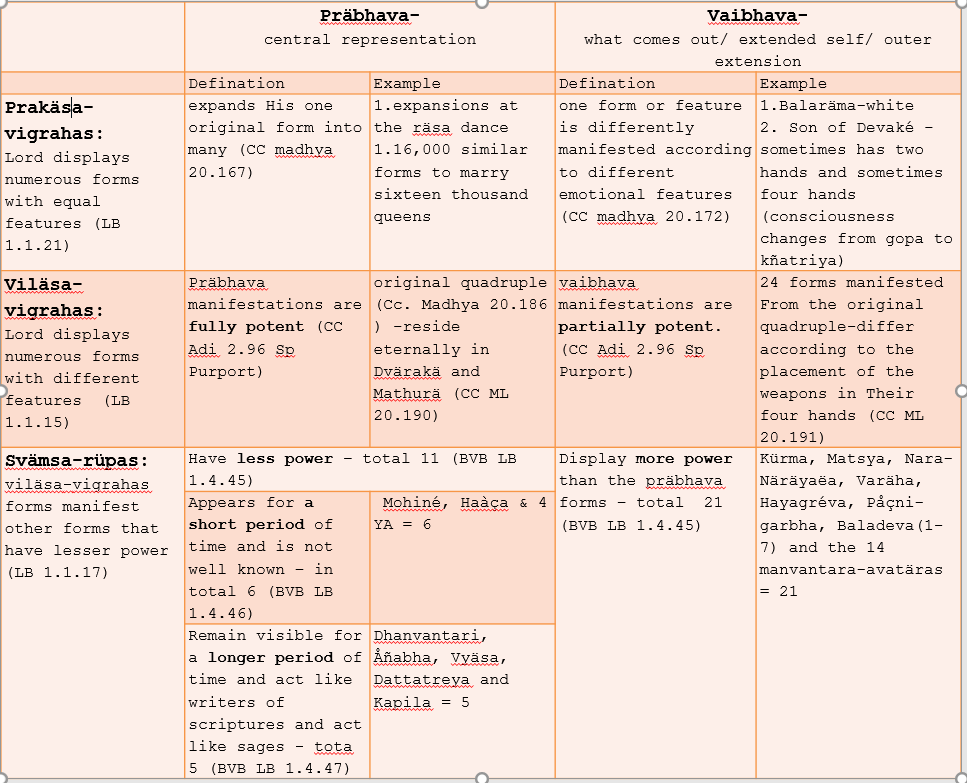 Not the answer you're looking for? Browse other questions tagged krishna iskcon .

8
What is the earliest record of the Kali Santarana Upanishad, source of the Hare Krishna Mantra?
13
What are the events when Lord Shiva and Lord Krishna met?
4
Do any biographies of Sri Chaitanya Mahaprabhu mention Him to be the founder of the Durga Puja tradition in Odisha?
4
According to ISKCON, what is the difference between Brahmavada and Mayavada?
2
Is worshipping Vishnu and Rama as Ishta allowed in ISKCON?
2
Do Gaudiya Vaishnavas believe in eternal damnation?