I read that Chaitanya Mahaprabhu had met and was guided by Sri Vyasa Tirtha.

If this is true, are there Gaudiya doctrines/practices that are influenced by Madhwa's teachings?

There is no question of Mahaprabhu's being guided by Vyasa Tirtha as per His authentic biographies. Many things are being created and preached now by those most of whom do not have the capacity to read His original biographies in bengali.

As one respected Sri Vaishnava Acharya puts it:

I also have a strong objection to gaudiyA's position as followers of madhva sAmpradAya as there is no real disciplic line. (disciplic line just doesnot mean guru's sishya is next guru, but the guru's teachings are unchanged by sishya when he becomes guru.) If there were a disciplic line, then gaudiyAs cannot deviate from sri Ananda teertha's pancha-bhEda and formulate their own achintya bhEda-abhEda. It would have been proper to call themselves chaitanya sampradAya, rather than 'madhva-gaudiya' sampradAya if they want to have a different interpretation of vedanta. If a disciplic line is genuine, then they will not deviate from the original teacher's readings (in this case sri madhva's). Hence, I do not see any genuinity of Gaudiyas as a bonafide vaishnava disciplic line, even in the case of Sri madhva being a bonafide AchArya. Hence their teaching that there are 4 bonafide disciplic lines is of little value. I do not mean to offend the devotion of gaudiya vaishNavAs or madhvas, but exposing the truth behind the genuinity of their disciplic lines. (Reference: http://www.ibiblio.org/sripedia/ramanuja/archives/apr05/msg00016.html)

Sri Chaitanyadeva was a disciple of Sripad Iswarpuri, (Who some claim, probably baselessly, as from the Madhva sect) . After initiation, Mahaprabhu started getting the vision of child Krishna : "krishna varna sishu ek murali bajay" to quote His words.

Soon He became immersed in the Radha-bhava which I think is not consistent with Child or Sishu Krishna. Sri Chaitanya defines now Him as 'Rasaraja' and 'Kishora'.This Radha-Bhava worship was not there in Madhva Sect.From Sri Ray Ramananda, Mahaprabhu got the support of Radha-Bhava. He later therefore mentioned both merits and demerits of the Madhva sect.

Mahaprabhu asked the Tattva-vadi Acharya of the Madhva sect about the goal and ways (Sadhya-Sadhanaa of their sect. The Acharya said : Surrendering the Varnashrama Dharma to Sri Krishna and going to Vaikuntha getting one of the five forms of Mukti. Mahaprabhu said : The scriptures stress on Sravana and Kirtana. These lead to Krishna-Prema which is the highest purusartha. The real devotees reject the five forms of Mukti as of no value. They reject both karma and mukti...Karmi,and Jnani are both devoid of Bhakti. I see that these two (karma and Jnana) are very much present in your sect. Only one quality of your sect is that you regard Sri Krishna as God (Sri Chaitanya Charitamrita 2/9/238-251).

So Mahaprabhu personally chose Madhura-bhava as the Highest Bhava and Radha and Krishna as both One and Two. He also focused on the chanting of the Mahamantra. His Sadhya-Sadhana is different from those of the Madhva sect.

Gaudiya Vaishnavas are followers of Mahaprabhu who worship Him as God.So chanting of the Mahamantra,treating Goibhava and its culmination Radhabhava as the highest bhava and worshipping Sri Chaitanya as God make them different from the Madhva followers.

According to Radhagovinda Nath, Sripad Ishvar Puri was not a disciple of Madhva sect at all. The title of the Madhva sect monks is Tirtha, and never Puri.Radhagovinda has also shown with logic that Baladeva Vidyabhushana was earlier a disciple of the Madhva sect and later joined the Gaudiya sect and the Guru-parampara sloka is written by the commentator of Baladeva (who was a Madhva) and not by Baladeva Vidyabhushana.(Reference: Gaudiya Vaishnava Darshan, Page 171-175).

So the question of influence does not arise at all.

According to the records of Madhva school, Chaitanya got inspired by Vyasatirtha.

According to Madhva school views, Sri Chaitanya embraced "virakti," approached Vyasatirtha (probably when he was in Bengal), belonging to Vyasaraya Mutt. Vyasatheertha offered deeksha and commanded him to spread the Madhva ideals. 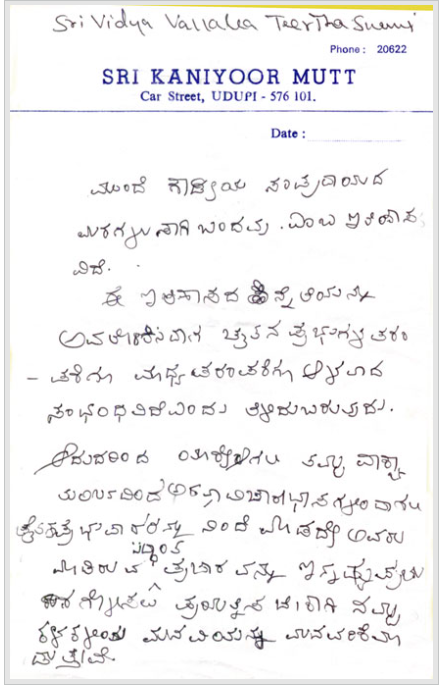 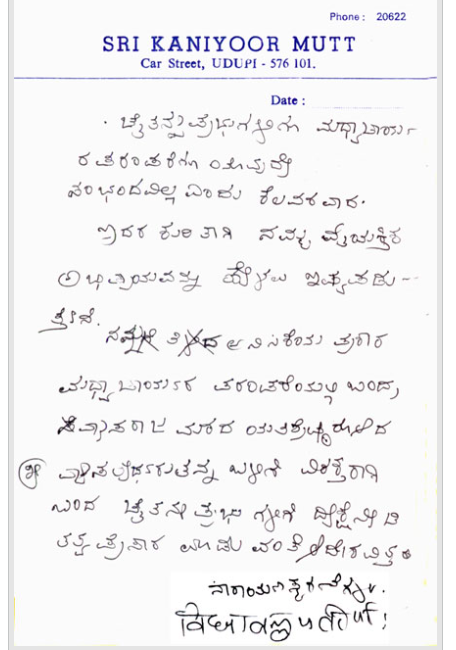 Chaitanya's side records will be more accurate regarding these matters. But it is clear that Chaitanya school's philosophy is different from Madhva school though the guru disciple link is connected to Madhva school.

Not the answer you're looking for? Browse other questions tagged history tradition gaudiya-vaishnavism madhvacharya .