Why did the direct disciples of Mahaprabhu not accept any relation with the Madhva Sect?

Why were they of this opinion?

It is interesting because some prefer to call them as the Madhva-Gaudiya sect in these days.

I generally don't participate in HSE, but I keep observing.

The reference that you provided in the question and elsewhere in your other answers in relation to Gaudiya Vaishnavism are from secondary sources and many times they are cherry picked into the sources which don't present Gaudiya Vaishnavism properly.

The guru parampara is first researched and the full list is mentioned by Kavi Karnapur in his book that was completed in 1576 AD.

These are the all the books where Madhva-Gaudiya link is clearly said:

In Text 3, he offers special respect to Madhvacharya:

All glories to Srila Madhvacarya Svami, the abode of transcendental happiness. Those who are learned and intelligent glorify him, for he is like a boat which enables the conditioned souls to cross beyond this realm of repeated birth and death.

I have taken many points from here:

You may read from Page 6 to Page 22. I gave some primary references also above.

Though direct followers of Madhvacharya don't have this full record, they acknowledge meeting of Chaitanya Mahaprabhu and Vyasatirtha and Gaudiya sampradaya being part of Madhva Sampradaya. Gaudiya Sampradaya is not an independent one and only misguided or uninformed Gaudiya Vaishnavas think that they are independent sampradaya. 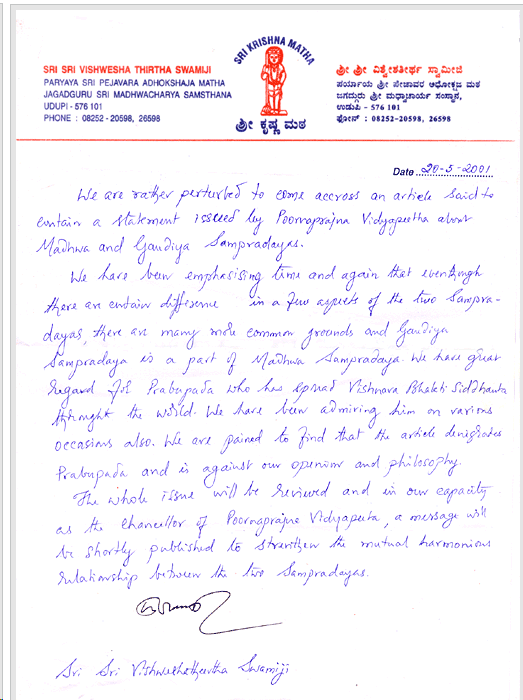 There are letters written by other mutts of Udupi. Since they are in Kannada, I am not attaching them.

It is wrong to say that Gaudiya Vaishnavas do not accept any link with the Madhva Sampradaya. Chaitanya Mahaprabhu was Himself a disciple of a Madhva Guru, Sri Isvara Puri.

Baladeva Vidyabhusana himself acknowledges the link between the Madhva Sampradaya and the Gaudiya Vaishnava Sampradaya in his "Prameya Ratnavali".

Brahma, the master of this universe, was the disciple of the lord of the spiritual world. His disciple was Narada and Vyasa became the disciple of Narada. Suka became Vyasa’s disciple through the awakening of spiritual knowledge. Madhvacharya took initiation in the Krishna mantra from Vyasa. Madhva’s disciple was Padmanabhacharya, whose disciple was Narahari, who was followed by Madhava Dvija. Madhava’s disciple was Akshobhya, who was followed by Jayatirtha, Jïanasindhu, Mahanidhi, Vidyanidhi and Rajendra. Jayadharma Muni was one of Rajendra’s many disciples and Vishnu Puri, the author of Bhakti-ratnavali and Purushottama the lover of Brahmin culture became his disciples. Vyasa Tirtha, the author of Vishnu-saàhita, was Purushottama’s disciple. Lakshmipati Tirtha, a reservoir of devotion, was Vyasa Tirtha’s disciple. Madhavendra Puri was the disciple of Lakshmipati, and it is by him that this religion was founded. His disciple, the sannyasi Isvara Puri, took up the mood of conjugal devotion, while Advaita Acharya [also the disciple of Madhavendra] took up the moods of servitude and friendship. Gaura (Caitanya Mahaprabhu) accepted Isvara Puri as his guru, and then flooded the material and spiritual worlds [with divine love].

There was a Saint of the name Hariram Vyas, he was the disciple of Madhavendra Puri (Gurus guru of Lord Caitanya Mahaprabhu mentioned in all biographies of Lord Caitanya) and he later took up the Radha Vallabh Sampradaya and he gives the following list

Read the names here it is in Sequence.

Coming to Jiva Goswami he does accept connection and addresses them as his Predecessor in his Tatva Sandarbha And says that he is accepting whatever Madhvacharya Quoted without even seeing the Shlokas in the original Scripture and accepts the wordings the Acharyas in his line.

Even in the Pushtimarg Vallabhacharya lineage, his grandson accepted that Madhavendra Puri was a Madhva Tatvavadi Vaishnav and gave Sanyas to Vallabhacharya.

This is the link. If u are unable to open this link then just search Udupi Ashtha Matha Letters in Google and u will find it.

There is clear evidence in Sri Chaitanya Charitamrita that Mahaprabhu did not consider Himself a follower of the Madhva sect.

Its true that Sri Chaitanyadeva was a disciple of Sripad Iswarpuri, Who was from Madhva lineage. Sri Chaitanya was God Himself Who incarnated to the earth 'to take the taste of the Radha-bhava and preach the Mahamantra-sankirtana, which is the yuga-dharma'.

So He Himself remeined in Radha-bhava which was not emphasised on in the Madhva lineage. Sri Chaitanya defines Sri Krishna as 'Rasaraja' and 'Kishora'. From Sri Ray Ramananda, Mahaprabhu got the support of Radha-Bhava. He later therefore mentioned both merits and demerits of the Madhva sect.

Mahaprabhu asked the Tattva-vadi Acharya of the Madhva sect about the goal and ways (Sadhya-Sadhanaa of their sect. The Acharya said : Surrendering the Varnashrama Dharma to Sri Krishna and going to Vaikuntha getting one of the five forms of Mukti. Mahaprabhu said : The scriptures stress on Sravana and Kirtana. These lead to Krishna-Prema which is the highest purusartha. The real devotees reject the five forms of Mukti as of no value. They reject both karma and mukti...Karmi,and Jnani are both devoid of Bhakti. I see that these two (karma and Jnana) are very much present in your sect. Only one quality of your sect is that you regard Sri Krishna as God (Sri Chaitanya Charitamrita 2/9/238-251).

Gaudiya Vaishnavas are followers of Mahaprabhu who worship Him as God.So chanting of the Mahamantra,treating Gopibhava and its culmination Radhabhava as the highest bhava and worshipping Sri Chaitanya as God make them different from the Madhva followers.

As Sri Radhagovinda Nath points out in the vol 1 of his 'Gaudiya Vaishnava Darshana, (page 165-171)

(a) According to Maadhvas, Iswara is Sevya and Jiva is His sevaka.But the same holds for the other Vaishnava sects also.

(d) As mentioned by Mahaprabhu, the Maadhva's goal is five types of Mukti and going to Vaikuntha. Gaudiyas never want Mukti and want to serve Sri Krishna alone.

(e) According to Madhvacharya, gopis are 'Apsara-strees'(wordly wives having heavenly bodies).This statement is against the scriptures according to the Gaudiyas, who think Radha and Krishna are One. Further, according to Madhva, Brajagopies< Asta-mahishis< Jasoda< Devaki< Vasudev < Arjun< Balaraama< Brahmaa. So Brahmaaa is the best devotee. Gaudiyas treat this as against the scriptures. They quote from Vamana-Purana to show that Sri Krishna was eager to take the dust of feet of the gopis.

(f) To establish the superiority of Brahma among the devotees, Madhva did not write the commentary of chapters 12,13 and 14 of the 10th Canto of Bhagavatam. This is highly objectionable to the Gaudiyas.

In Vrihad-Vaishnava-Toshini commentary of Bhadgavata by Sripada Sanatana Goswami, a protest agaist the Maadhva sect is recorded.

Sripada Srijiva Goswami in Laghu-Vaishnava-Toshini has strongly protested against the Maadhva views of the Brahma-mohana-leela.

Kavi Karnapur also mentions in Chaitanya-Chandrodaya(8/1) that Mahaprabhu did not accept the opinion of the Madhvas.

Sripad Srijiva Goswami has mentioned the Madhva sect as 'the Other Sect' in his Sarva-Samvaadini. He always refers to Madhva as Tattvavada-Guru, but NEVER as 'Guru of Our Sect'.

By the way a similar happening is there is Kavirji's life.He was a disciple of Sri Ramananda, Who was a worshipper of Sri Rama with Form. But Kavir after illumination rejected the worship of God with form and in temples. His followers are known as Kavir-panthis who no longer worship Rama with form and accept Kavirji as an Incarnation of the Supreme Godhead. So Kavir-panthis inspite of having the Ramananda lineage are not followers of that sect.Theirs is a new sect.

Since about hundred years we are hearing the term 'Madhva-Gaudiya' sect coming into prominance (primarily from some individuals who took sannyasa after the Madhva lineage.If we regard Sri Chaitanyadeva and His followers' teachings to be the essence of the Gaudiya Vaishnavism, this term seems unacceptable. These are probably coming from the ones who never read the original books and are not dependent on any authentic sources.Radhagovinda Nath also established that none of the direct disciples of Sri Chaitanya did accept wearing of coloured clothes or taking external sannyas as their focus is on Seva.What the current Acharyas say about this has nothing to do with my question. So the view of Radhagovinda Nath seem absolutely valid.

One of Radhagovinda Nath's books on Sri Chaitanya is available online here: https://archive.org/details/GauraTattva/page/n1 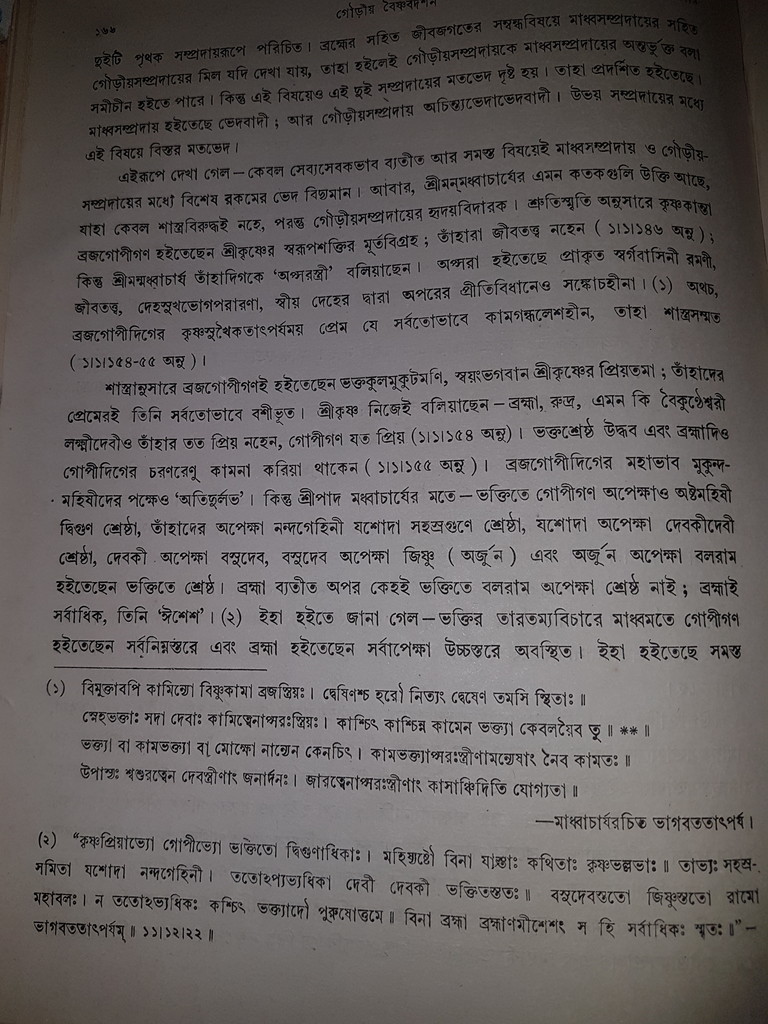 One respected Acharya of the Shri-Vaishnava sect is of the same opinion:

I also have a strong objection to gaudiyA's position as followers of madhva sAmpradAya as there is no real disciplic line. (disciplic line just doesnot mean guru's sishya is next guru, but the guru's teachings are unchanged by sishya when he becomes guru.) If there were a disciplic line, then gaudiyAs cannot deviate from sri Ananda teertha's pancha-bhEda and formulate their own achintya bhEda-abhEda. It would have been proper to call themselves chaitanya sampradAya, rather than 'madhva-gaudiya' sampradAya if they want to have a different interpretation of vedanta. If a disciplic line is genuine, then they will not deviate from the original teacher's readings (in this case sri madhva's). Hence, I do not see any genuinity of Gaudiyas as a bonafide vaishnava disciplic line, even in the case of Sri madhva being a bonafide AchArya. Hence their teaching that there are 4 bonafide disciplic lines is of little value. I do not mean to offend the devotion of gaudiya vaishNavAs or madhvas, but exposing the truth behind the genuinity of their disciplic lines. (Reference: http://www.ibiblio.org/sripedia/ramanuja/archives/apr05/msg00016.html)

According to Radhagovinda Nath, Sripad Ishvar Puri was not a disciple of Madhva sect at all. The title of the Madhva sect monks is Tirtha, and never Puri.Radhagovinda has also shown with logic that Baladeva Vidyabhushana was earlier a disciple of the Madhva sect and later joined the Gaudiya sect and the Guru-parampara sloka is written by the commentator of Baladeva (who was a Madhva) and not by Baladeva Vidyabhushana.(Reference: Gaudiya Vaishnava Darshan, Page 171-175).

So the Guru-parampara shown is other answers is questionable.

2
What are the views of Shri Chaitanya Mahaprabhu regarding Dvaita of Shri Madhwacharya?