What is the story of Mahabali's sister's attempt to destroy the world?

In the Bala Kanda of the Ramayana, Rama is hesistant to kill the Rakshasi (demoness) Thataka because she's a woman, but the sage Vishwamitra tells him that even Indra king of the gods has fought women when they were engaged in evil:

Compassion regarding the elimination of a female is ungermane, oh, best one among men, since a prince has to effectuate it intending the welfare of four categories of society.... To the nominee who bears the burden of kingdom this is the age-old duty, and hence oh, Rama, the legatee of Kakutstha, eliminate this infamy, as goodness is inevident in her, isn't it? Oh, Rama, the protector of people, we have heard that Indra once eliminated Manthara, the daughter of Virochana, when she wished to annihilate earth, haven't we?

Well, "we" may have heard about this, but I haven't! So my question is, what is the story of Manthara daughter of Virochana? For those who don't know, Virochana was a famous demon killed by Indra. He was the son of Prahlada and the father of Mahabali. So that would make Manthara Mahabali's sister.

Unfortunately, the Puranas often focus on male genealogy, so they're not much help here; the Vishnu Purana just says "Prahláda had a son named Virochana; whose son was Bali" and similarly the Srimad Bhagavatam says "Prahlāda had one son, Virocana, whose wife gave birth to Bali Mahārāja." However, later on in the Ramayana there is some indication that Virochana had a daughter; this excerpt from the Uttara Kanda of the Ramayana describes the wife of Ravana's brother Kumbhakarna:

[T]hat master - Lanka's lord - going (back) to the city married his brothers. And Ravana married the grand-daughter of Virochana (on the maternal side) named Vajrajwala to Kumbhakarna.

I found the answer on page 337 of this book:

In fact, most [North Indian] manuscripts replace the name of Manthara with Dirghajihva, "Long-tounged"[.]... Dirghajihva is a rakshasa woman known to the Mahabharata (3.276.4). There she is said to be slain by Indra.

Here is what the relevant chapter of the Vana Parva of the Mahabharata says:

Even the celestials with Indra at their head, and the Asuras have to tread in the path that is trod by thee! It was after such afflictions that the wielder of the thunderbolt, aided by the Maruts, slew Vritra, and the invincible Namuchi and the Rakshasi of long tongue!

In any case, the story of Indra killing the demoness Dirghajihvi is told in this excerpt from the Panchavimsha Brahmana of the Sama Veda:

There is the Saumitra (Saman). A (certain) female, sacrifice-destroying, Ogre, Dirghajihvi, kept here licking at the (butter of the) sacrifices. Indra despaired of killing her by any strategies whatever. Now Sumitra, the Kutsa, was a handsome (young man). To him he (Indra) said, "Call her to thee." He called her to him. She said to him "This truly is unheard by me, but it is rather pleasant to my heart." He (Sumitra) came to an understanding with her. At the trysting place they both (Indra and Sumitra) slew her. That forsooth, had been at that moment their wish. Through this (Saman) he obtains the fulfillment of his wish. (But) an (inauspicious) voice addressed him (Sumitra) thus: "Being Sumitra, thou hast done a bloody deed." Grief tormented him; he performed austerities, he saw this Saumitra (Saman). Through it he drove away his grief. He who, in lauding, has applied this Saumitra (Saman), drives away his grief.

The story is told in more detail in this excerpt from the Jaiminiya Brahmana of the Sama Veda, but warning, it's quite inappropriate.

In any case, I haven't come across any scriptures which identify Dirghajihvi as the daughter of Virochana.

Before I answer this question, want to share story about Manthara:

(Manthara - Hunchbacked maid of Queen Kaikeyi) Manthara is a servant who convinced Kaikeyi that the throne of Ayodhya belonged to her son Bharatha and that Rama should be exiled from the kingdom. Manthara is described in the Ramayana as a hunchback, and extremely ugly.

Even Manthara was one of good nature. She was only acting because of an incident that had happened in her previous birth. She was a deer then. One day she was playing with her husband in the forest. The king of Kekaya had come to the forest on hunting. He saw both the deer playing with each other and he killed the male deer with an arrow. The female deer was grief stricken. Then the female deer went to the king and poured out her anguish thus, “Oh king! We were leading our lives peacefully and blissfully. You have inflicted untold grief on me by killing my husband. You have ruined my life.” The king ruefully said” Nobody can escape the sequence of his actions. The female deer took birth as Manthara and caused the death of Dasaratha who was the son-in–law of the King of Kekaya. This life is nothing but an ocean with the waves of union and separation. Everybody must pass through the adversities of life.

Manthara heard the conditions for Kaikeyi’s Marriage, Manthara never forgot her past resolve and therefore decided to poison Kaikeyi's mind against her natural affection and her duties towards Dasaratha.

When anger seizes a person,

He cannot perform any work successfully.

He gathers sin and is humbled.

And separates him from people who are near and dear.

Manthara used many a specious and cunning argument to cloud and poison the pure and unselfish mind of Kaikeyi, there is none who can destroy 'Manthara'. Manthara ultimately succeeded in changing the mind of Kaikeyi and caused the departure of Rama, Lakshmana and Sita from Ayodhya.

The anger of Manthara sent Rama to the forest, when Lakshmana wanted to kill her, Rama stopped him, saying, "One should not kill a woman." Jealousy is the worst of all evil qualities. Three-fourths of the world is ruined because of jealousy. Jealousy has no limits whatsoever. People are jealous of others’ prosperity, beauty and education, and try to cause their downfall. One should not speak bad words, listen to bad things and indulge in evil activities. This is the main teaching of Ramayana. Manthara indulged evil talk and Kaikeyi paid heed to her.

In my view the story behind the Manthara attempt to "Destroy Earth" means form of Jealous, who indulge in evil talk and evil actions should be spoil the world

• The Ramayana gives examples of Ravana and Manthara as both had evil propensities in them. Ravana was slain in the battle, but Manthara is alive even today in the form of jealousy. There is none who can destroy 'Manthara'. We should ignore this 'Manthara' and carry on with our duties. When Lakshmana wanted to kill her, Rama stopped him, saying, "One should not kill a woman." Jealousy is the worst of all evil qualities. Three-fourths of the world is ruined because of jealousy. Jealousy has no limits whatsoever. People are jealous of others’ prosperity, beauty and education, and try to cause their downfall. One should not speak bad words, listen to bad things and indulge in evil activities. This is the main teaching of Ramayana. 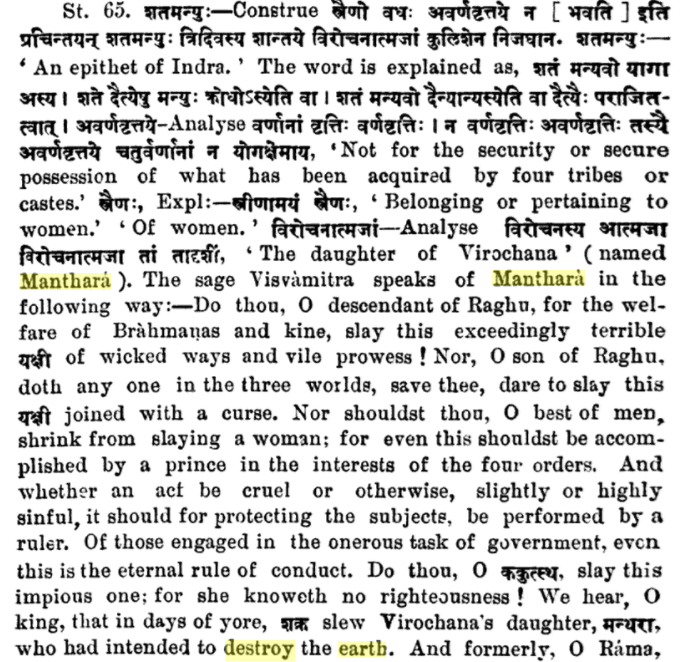 the point where Indra needed to kill her?

• Manthara sister of Bali and daughter of Virocana and Lord Indra killed Manthara, when she wanted to destroy earth with her evil mind. Many great personalities had to kill women when those women went away from path of Righteousness.

Note: I tried to answer (partial) this question as much as I know and lot of Google search help me too, but I haven't find full answer for this question. As per my research I come to know there is no actions from Manthara to Destroy Earth?

Not the answer you're looking for? Browse other questions tagged ramayana indra asuras .

22
What scriptures describe Shanta as Dasharatha's daughter?
12
What is the story of Vishnu killing sage Bhrighu's wife Kavyamata?
13
Did Dasharatha fight against the same demon Shambara described in the Rig Veda?
15
Is sitting on a camel in a dream inauspicious?
14
What was the memory/rivalry of Ravana with Bali's son Bana?
6
Was Rishi Agastya the uncle of Ravana?
8
What are the details of the story of Indra giving the Crest-jewel(chudamani) to king Janka?
5
Exactly when did Vishvamitra become Brahmarshi?