How do the followers of Vivekananda reconcile the contradictions in all religions when they believe all religions are equal or true?

According to this answer, the followers of Swami Vivekananda believe that all religions are true, or that they are all equal.

If this is so, then how do they explain the contradictory claims in all religions?

For example, Christians think only humans have souls. Buddhists say there are no souls. But Hindus do say there are souls and that too not just in humans, but even animals.

Religion is one, but its application must be various (VI.82).

Aztecs think human sacrifice is good, Islamic extremists believe that terrorism is enjoined by God. And so on.

Do followers of Swami Vivekananda believe that all these are true?

According to Swami Vivekananda

Each soul is potentially divine.

The goal is to manifest this Divinity within by controlling nature, external and internal.

Do this either by work, or worship, or psychic control, or philosophy — by one, or more, or all of these — and be free.

This is the whole of religion. Doctrines, or dogmas, or rituals, or books, or temples, or forms, are but secondary details.

So He means the core teaching of the religions is true. Secondary details can of course vary. And terroist views are even not parts of the secondary details of any religion as these are framed by the fanatics.

Leaving aside dogmatic study, and taking a common-sense view of the thing, we find at the start that there is a tremendous life-power in all the great religions of the world.

This then is a fact in the present history of the human race, that all these great religions exist and are spreading and multiplying. Now, there is a meaning, certainly, to this; and had it been the will of an All-wise and All-merciful Creator that one of these religions should exist and the rest should die, it would have become a fact long, long ago. If it were a fact that only one of these religions is true and all the rest are false, by this time it would have covered the whole ground. But this is not so;

If the claims of a religion that it has all the truth and God has given it all this truth in a certain book were true, why are there so many sects? Fifty years do not pass before there are twenty sects founded upon the same book. If God has put all the truth in certain books, He does not give us those books in order that we may quarrel over texts.

So with every religion. I am not against any sect. I am glad that sects exist, and I only wish they may go on multiplying more and more. Why? Simply because of this: If you and I and all who are present here were to think exactly the same thoughts, there would be no thoughts for us to think. We know that two or more forces must come into collision in order to produce motion. It is the clash of thought, the differentiation of thought, that awakes thought. Now, if we all thought alike, we would be like Egyptian mummies in a museum looking vacantly at one another's faces — no more than that! Whirls and eddies occur only in a rushing, living stream. There are no whirlpools in stagnant, dead water.

But so long as mankind thinks, there will be sects. Variation is the sign of life, and it must be there. I pray that they may multiply so that at last there will be as many sects as human beings, and each one will have his own method, his individual method of thought in religion.

But this thing exists already. Each one of us is thinking in his own way, but his natural course has been obstructed all the time and is still being obstructed. If the sword is not used directly, other means will be used. Just hear what one of the best preachers in New York says: he preaches that the Filipinos should be conquered because that is the only way to teach Christianity to them! They are already Catholics; but he wants to make them Presbyterians, and for this, he is ready to lay all this terrible sin of bloodshed upon his race. How terrible! And this man is one of the greatest preachers of this country, one of the best informed men. Think of the state of the world when a man like that is not ashamed to stand up and utter such arrant nonsense; and think of the state of the world when an audience cheers him! Is this civilisation?

Then arises the question: How can all these varieties be true? If one thing is true, its negation is false. How can contradictory opinions be true at the same time? This is the question which I intend to answer. But I will first ask you: Are all the religions of the world really contradictory? I do not mean the external forms in which great thoughts are clad. I do not mean the different buildings, languages, rituals, books, etc. employed in various religions, but I mean the internal soul of every religion. Every religion has a soul behind it, and that soul may differ from the soul of another religion; but are they contradictory? Do they contradict or supplement each other? — that is the question. I took up the question when I was quite a boy, and have been studying it all my life. Thinking that my conclusion may be of some help to you, I place it before you. I believe that they are not contradictory; they are supplementary. Each religion, as it were, takes up one part of the great universal truth, and spends its whole force in embodying and typifying that part of the great truth. It is, therefore, addition; not exclusion.

His conclusion therefore is:

Sectarianism, bigotry, and its horrible descendant, fanaticism, have long possessed this beautiful earth. They have filled the earth with violence, drenched it often and often with human blood, destroyed civilisation and sent whole nations to despair. Had it not been for these horrible demons, human society would be far more advanced than it is now. But their time is come.

All His followers believe that Swamiji's spirit is working and will work through many Acharyas to eradicate all hatred and all demeaning of other religions and inspire each one to dive deep into his or her own spiritual practices and to realise the Truth instead of branding other's religions as inferior or other's God as demi-god.

Truth is one and same, sages call it by various names

God is infinite, nameless, formless Omnipresent, Omnipotent and Omniscient. But you cant focus or meditate on his infinite forms and infinite names with only 1 mind/intellect, so different religions or paths were introduced by God’s prophets or Saguna Brahman for different places based on local circumstances and languages.

Knowledge leads to unity, but Ignorance to diversity.

Truth is one; only It is called by different names. All people are seeking the same Truth; the variance is due to climate, temperament, and name. A lake has many ghats. From one ghat the Hindus take water in jars and call it "jal". From another ghat the Mussalmāns take water in leather bags and call it "pāni". From a third the Christians take the same thing and call it "water". Suppose someone says that the thing is not "jal" but "pāni", or that it is not "pāni" but "water", or that it is not "water" but "jal", It would indeed be ridiculous. But this very thing is at the root of the friction among sects, their misunderstandings and quarrels. This is why people injure and kill one another, and shed blood, in the name of religion. But this is not good. Everyone is going toward God. They will all realize Him if they have sincerity and longing of heart.

One should not think, "My religion alone is the right path and other religions are false." God can be realized by means of all paths. It is enough to have sincere yearning for God. Infinite are the paths and infinite the opinions.

"I have practised all religions—Hinduism, Islam, Christianity—and I have also followed the paths of the different Hindu sects. I have found that it is the same God toward whom all are directing their steps, though along different paths. You must try all beliefs and traverse all the different ways once. Wherever I look, I see men quarreling in the name of religion—Hindus, Mohammedans, Brahmos, Vaishnavas, and the rest. But they never reflect that He who is called Krishna is also called Siva, and bears the name of the Primal Energy, Jesus, and Allah as well—the same Rama with a thousand names...’

Two persons were hotly disputing as to the colour of a chameleon. One said, 'The chameleon on that palm-tree is of a beautiful red colour.' The other, contradicting him, said, 'You are mistaken, the chameleon is not red, but blue.' Not being able to settle the matter by arguments, both went to the person who always lived under that tree and had watched the chameleon in all its phases of colour. One of them said, 'Sir, is not the chameleon on that tree of a red colour?' The person replied, 'Yes, sir.' The other disputant said, 'What do you say? How is it? It is not red, it is blue.' That person again humbly replied, 'Yes, sir.' The person knew that the chameleon is an animal that constantly changes its colour; thus it was that he said 'yes' to both these conflicting statements. The Sat-Chid-ânanda God likewise has various forms. The devotee who has seen God in one aspect only, knows Him in that aspect alone. But he who has seen Him in His manifold aspects, is alone in a position to say, 'All these forms are of one God, for God is multiform.' He has forms and has no forms, and many are His forms which no one knows. 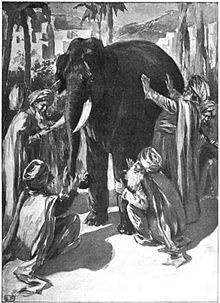 All who have actually attained any real religious experience never wrangle over the form in which the different religions are expressed. They know that the soul of all religions is the same and so they have no quarrel with anybody just because he or she does not speak in the same tongue.

Buddha is the only prophet who said, I do not care to know your various theories about God. What is the use of discussing all the subtle doctrines about the soul? Do good and be good.

3
Do the followers of Vivekananda believe that all religions are equal?