Significance of turmeric in Hindusim

Turmeric is used in many religious occasions and ceremonies in Hinduism in various ways. It is especially used during marriages in many ways. 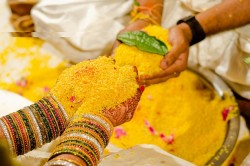 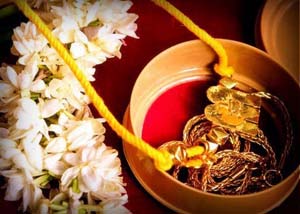 Turmeric is also used to make Ganesha and other gods/goddess 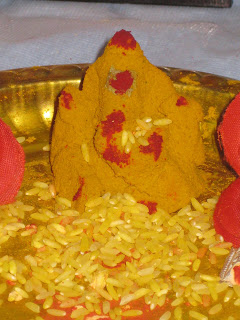 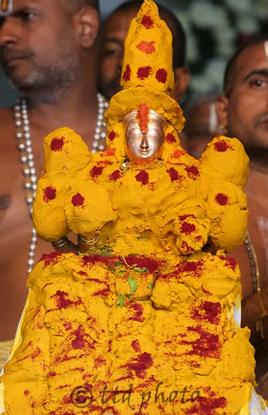 One logical explanation for this is: in old times(even now!) not everyone is so intelligent to recognize the medical importance of items like turmeric; so adding an element of religious importance makes it significant and noticeable by everyone.

So coming back to importance of turmeric, it contains many medicinal values that consuming it a little bit every day can reduce the risk of deadly diseases like cancer. That is the main reason why turmeric is an important spice in Indian foods. So as far as your question is concerned, the turmeric applied to Gods/ used to make murthis like Ganesha- is later given to devotees as prasad which the devotees (mainly ladies) apply to their body and face before taking bath. This reduces tan, skin cancer issues and improves the glow on the face. We did not have these many cosmetics earlier and turmeric was considered the main cosmetic.

Same is the case with rice made yellow with turmeric (akshatha), this when thrown upon us leaves a little bit of residue of turmeric and then when taken bath- dissolves into our body through our skin.

Hope that answers your question!

My answer is in line with that of Dee. There are so many medical benefits of turmeric that religious importance is added to it to make it a daily part of life. Sri Sri Ravi Shankar narrates relevant incidents:

I want to share with you one incident that happened in 1980. I had organized a meeting of Ayurvedic doctors and doctors of modern medicine in New Delhi. It was in Vasant Vihar and there were about 50 to 60 doctors on each side. As the conference was going on, the discussion of turmeric came up, and I vividly remember this discussion of turmeric. All the allopathic doctors said that turmeric has no value, it is just a pigment. They dismissed the Ayurvedic doctors who said that turmeric is a vayosthapan, which means it arrests ageing, and it creates the more ojus (vitality) in your system. This is what the Ayurvedic doctors kept saying but the allopathic doctors said that it is all total nonsense.

Today allopathy has recognized that the turmeric does the job of 19 life saving drugs including cancer. Turmeric is an anti-viral agent if you have viral fever. Usually allopathic doctors say that there is no medicine for viral fever, just take some fresh turmeric with fresh lime, and that will do.

In India, we make pickles of turmeric, ginger and lemon, and this is the best. Turmeric is anti-viral, anti-bacterial, and an antioxidant. It does the work of aspirin, it is blood thinner, and it stops blood coagulation. It does the work of 19 important life saving drugs.

In our tradition, on any auspicious event, the first thing what we buy is turmeric and then we buy clothes and other things. I remember when we got new clothes my grandmother used to put a little turmeric at the corner of the cloth. If it is a new cloth put some turmeric at the corner. Turmeric is given so much importance in our country and today.

Ayurveda is the medicine of the 21st century. Of course not all Ayurvedic preparations which people do are hygienic or scientific in nature. We must not ignore science, but along with science we must take Ayurveda.

Medical benefit from turmeric is just a side effect and not the main reason.

Hinduism lays a lot of emphasis on "purification" of body for the divinity to enter into the seeker.

This begins with the activation of Ajna Chakra (Third eye), the link to the super-consciousness or Divinity. The neurotoxins in the body interferes with allowing the spiritual processes like puja, kriya etc to have the desired effect.

For eg Ajna Chakra (3rd eye) with is the link with consciousness gets "calcified" due to flouride present in water and get absorbed through skin. Application of turmeric on the skin removes these kind of neurotoxins. This allows the strengthening of nervous system.

Activated Chakras with a strong nervous system allows the seeker to explore and connect with the Divinity.

I have answered this is a different context about bath with turmeric water at https://hinduism.stackexchange.com/a/27038/12389

Not the answer you're looking for? Browse other questions tagged gods tradition marriage .

5
What is the significance behind saffron and turmeric mixed rice shower in hindu marriage?