I have seen lot of people saying that ISKCON's version of Bhagavad-Gita/commentaries is different from the other Authentic versions. Can people throw light on what all major differences are there in both?

EDIT: I don't think there will be lot of differences in both. Even if there are too many differences then please list down few differences (maybe upto 5 can do).

First let me point out that to me only the original sanskrit slokas are 'authentic' Gita.

Now I come to the 'Authentic' commentaries.So far as I know, the first authentic commentary was written by Sri Adi Sankaracharya, which is the bhashya that establishes the Advaita philosophy.He made commentary of the 700 slokas of Gita out of 745 slokas. All the later Acharyas like Sri Ramanuja, Sri Madhva etc wrote commentaries only of these very 700 slokas chosen by Sri Adi Sankara. The purpose of each was to establish one's own philosophy by explaining Gita.They wrote the bhashyas in sanskrit, analysyiing the slokas word by word and going to the very depth of each word. Sanskrit is a very very rich language and each word can be interpreted in so many different ways.But for all the Acharyas, the target readers were sanskrit scholars of their own and the other sects, and so besides being unthinkably knowledgeable in sanskrit, they were very keen on maintaining the standard of their commentaries. Each Acharya after Sankaracharya had to analyse in detail how each sloka supports the very philosophy preached by him in essence.

ISKCON's Gita on the other hand is written in English. Its objective is to preach Sri Krishna as the supreme God primarily to the residents of the foreign countries. So it is quite obvious that the depth and beauty that was there in the bhashyas of the Acharyas written to influence the scholars is not expected from this version. Here, the attempt is to establish a monotheistic type of religion that would appeal the followers of the other religions. So Sri Krishna has been projected as 'The Supreme Personality' of Godhead and other gods branded as demi-gods. 'god' versus 'Godhead' was not found enough to express the insignificance of other deities as compared to Sri Krishna,and so He was made 'The Supreme Godhead' (Parama- Ishwara ?) while other deities 'Demi-god' (Upa-Devata/Apa-Devata). No bhashyakara Acharya had the need to use such words and this is one big difference.

Another difference with the Udbodhana version of Gita providing relevant parts from the commentaries of Sri Adi Sankara, Sri Sridhara Swami and Sri Madhusudan Sraswati(this 'Udbodhan'-Gita is read widely in Bengal and is personally very dear to me) are also worthy of mention. One beauty of the Gita slokas is its synthesis of the four yogas (Karmayoga, Raja-yoga, Jnana-Yoga and Bhakti-yoga) as mentioned by Swami Vivekananda. The names of the different chapters also make it very clear. So, Sri Krishna admits that the Supreme Goal can be reached by all these different paths. Yes, lastly He asks Arjuna to surrender to Him, which can be termed the 'Saranagati-yoga', but He keeps other paths reaching Him fully open. The ISKCON-Gita on the other hand converts all other yogas to bhakti-yoga--- because this version is written to preach 'Krishna-consciousness'.

The above had led to many startling interpretations, I am mentioning just one of them here, which becomes clear from a conversation between Bhaktivedanta Swami (here referred to as 'Prabhupada') and some Asok Chugani (Reference :https://vedabase.io/en/library/transcripts/770108r2bom/?query=Bhagavad+Gita+14.27#bb424147) :

Ashok Chugani: Swāmījī, may I ask one question which I had much discussion with your śiṣya here. Brahman, the sort of, what we in Hindu philosophy consider as the ultimate Godhead...

Ashok Chugani: Brahman you consider Kṛṣṇa. But He is, of course... He was incarnate. He was one of the avatāras.

Prabhupāda: That is your opinion. [laughter] That is not...

Ashok Chugani: That is our point which I want to clarify.

Prabhupāda: You have to take the śāstra, authority.

Ashok Chugani: Does not Gītā say...

The Udbodhan-Gita obviously does not explain the sloka in this way. It offers two alternative explanations --both from the commentary of Sri Adi Sankaracharya ---of the sloka (Gita, 14/27):

I am quoting both below (translated from Bengali. Anyone is free to demand a photo-copy of the original pages).

(a) I (the Pratyagaatma) am changeless (Avyaya), Deathless (Amrita),Eternal (Sanatana), Reachable by religious path of the Jyana-yoga, and am the source of Bliss of the Paramatman.[ by samyak jnana, the pratyagaatma becomes fully convinced that It is one with the Paramatman.]

(b) I (the Formless Brahman) am the abode(Pratistha) of the Deathless, Changeless, Saguna Brahma and so I am the essence of the Sanatana Dharma in form of the undisturbed dedication to Jnana-marga, am the abode of the Supreme Bliss also. (page 321-22).

I am attaching the explanation of the sloka by Krishnaprem, the siddha Gaudiya Vaishnava from His 'The Yoga of the Bhagavad Gita(Penguin, 1937) in image form. 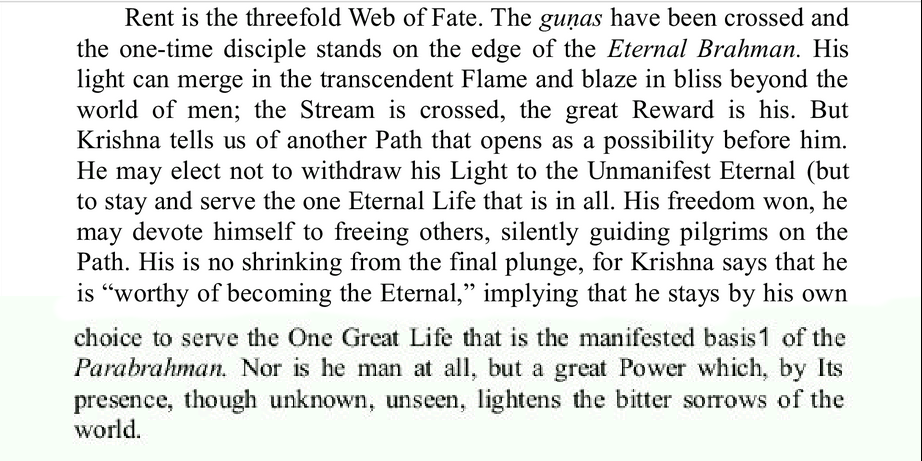 The rays are here coming to me from the depth and the beauty of explanations.

The 4th chapter of the B.Gita already has the hint to answer this question. Arjuna is asking about the eternal roots of the knowledge been given to him. In Srimad Bhagvatam chapter# 14, volume# 11, Uddhava is asking Krishna why there are so many explanations of the same eternal knowledge which has been descending from the one transcendental source. Here, Krishna explains to him that originally there was only one eternal knowledge but due to the influence of material potency upon the interpretation by humans having four material sense errors their explanations/interpretations become different.

The following are the few significant differences listed below (features missing in non-ISKCON Bh.Gita):

(i) The ISKCon book form of B.Gita (Arjun-Krishna Mahabharat samvad) has been explained on the basis of the Upnishadas (Vedas). Unlike other Gita books explained, we find herein the least material influence involved.

(ii) Targeting intermediate to advanced level of learners of the Vedas the book includes enough eternal knowledge and reference material for the basics learners and beginners too.

(iii) The English version has the accurate sanskrit to english transliterations for international audiences, unavailable in other variants of the book.

(iv) The sanskrit root words (sandhi-vichchheda) have been translated uniquely. The compiler has taken ultimate care not to include his personal opinion in explaining the book.

(v) The sloka-finder (index) at the end of the book is also a boon to the beginners who want to find the location of their favorite sloka in the book of the seven hundred verses.

Not the answer you're looking for? Browse other questions tagged bhagavad-gita iskcon .

8
Understanding Bhagavad Gita 2.46, 2.47
12
Bhagavad Gita and views on other religions?
9
How do Advaitins counter the rebuttal of Ramanujacharya on Advaita Vedanta in His commentary on Bhagavad Gita 2.12?
5
Nasta Moha in Bhagavad Gita
1
Bhagavad Gita reading
1
Confusion with duty ethics as instructed by Lord Krishna
2
What is ISKCON's view on Yoga Vasista?
7
Is Bhagavad Gita misogynist from the interpretation of A. C. Bhaktivedanta's Version 'As it is'?