Came across this Yantra in a museum very recently. Which Devi's Yantra is this? 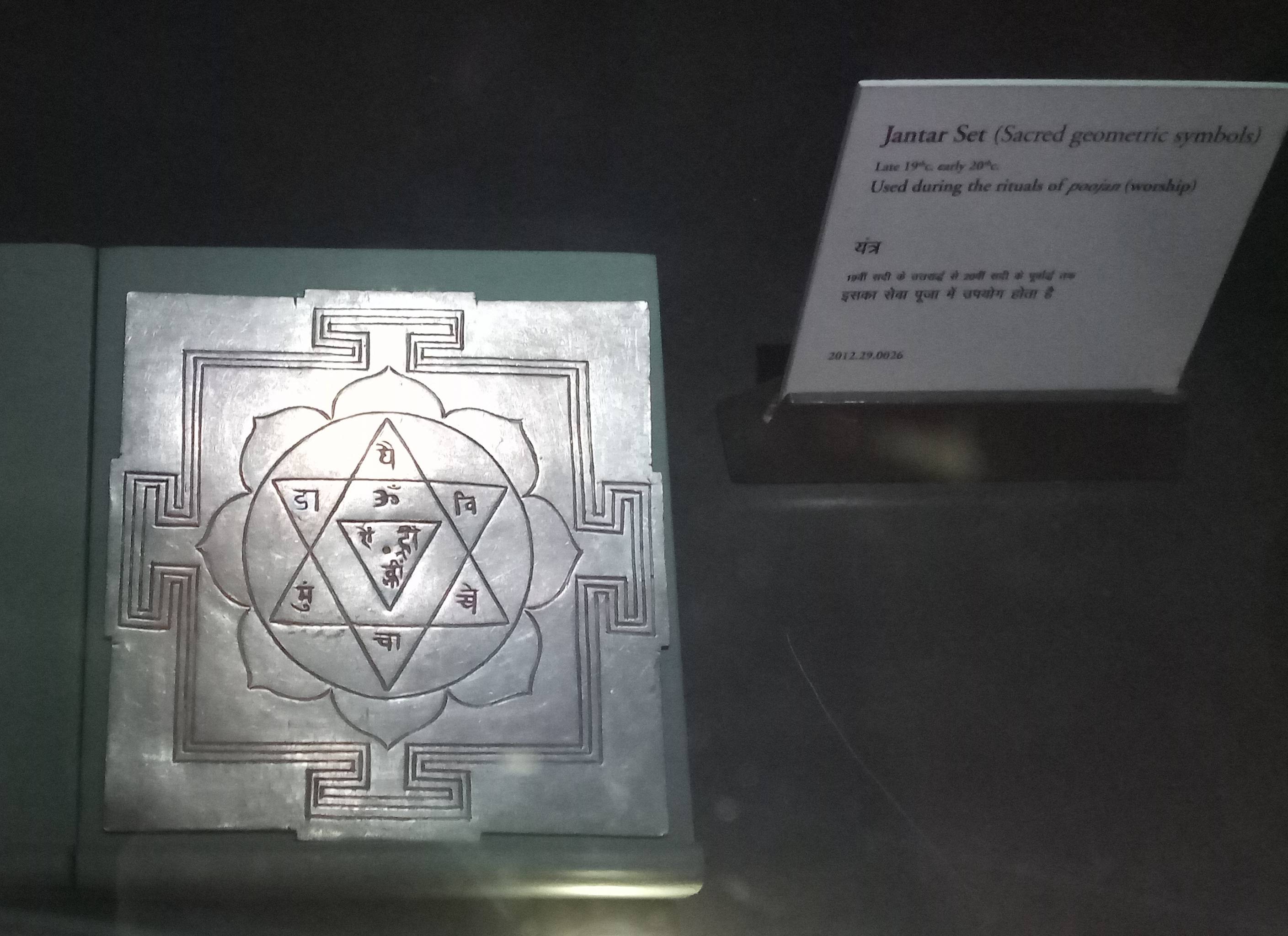 The image attached is of a yantra or something like a yantra, I came across at City Palace in Udaipur. What exactly is this?

Separately, what are yantras? In what kind of Hindu ritual are these used? 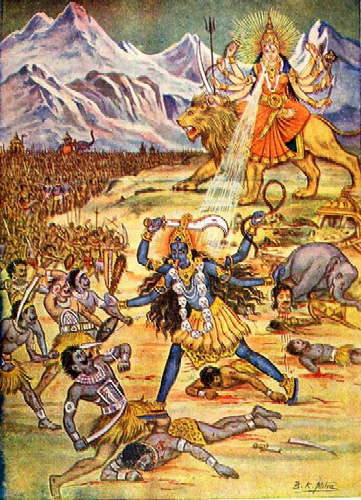 The above shows how Devi ChamundA appeared from the eye-brows of Devi amvikA. Now coming to your questions:

What exactly is this?

This is a framed yantra of Devi ChamundA engraved on a silver-plate with the famous navarNa Mantra written on it,

In Hinduism, Goddess Chamunda is an aspect of the Mother Goddess.She is closely associated with goddess Kali and is named Chamunda-Kali. Chamunda is one of the Saptamatrikas associated with Goddess Shakti along with Brahmani, Vaishnavi, Maheshwari, Kaumari, Varahi and Indrani. In Hindu scripture 'Sri Sri Chandi (Devi Mahatmya,) Maa Chamunda

emerged as Chandika from an eyebrow of aggrieved goddess Kaushiki or Anvika, a goddess emerging from "sheath" of Parvati (Sri Sri Candi, chapter 7, Mantra 5).

ChAmundA fought a fierce battle with the demons ChaNda and MuNda,

ultimately killing them. Goddess Chamunda-Kali took the slain heads of the two demons to goddess Amvika Kaushiki, Who became immensely pleased. Kaushiki blessed Chandika and bestowed upon her the title of “Chamunda", to commemorate the latter's victory over the demons.(Mantra 27)

According to a later episode of Devi Mahatmya,

Devi created Matrikas from Herself and with their help slaughtered the demo-army of Shumbha-Nisumha. Chmunda-Kali is here described as a Matrika who sucked all the blood of the demon Raktabija. Kali is given the epithet Chamunda in the text.Thus, the Devi Mahatmya identifies Chamunda with Kali. (Chapter 8, Mantra 54-57).

By the way, in Varaha Purana,

the story of Raktabija is retold, but here each of Matrikas appears from the body of another Matrika. Chamunda appears from the foot of the lion-headed goddess Narshmi. Here, Chamunda is considered a representation of the vice of tale-telling (pasunya). The Varaha Purana text clearly mentions two separate goddesses Chamunda and Kali, unlike Devi Mahatmya.

tells a different story of Chamunda's origins. She with other matrikas was created by Shiva to help him kill the demon Andhakasura, who has an ability - like Raktabija - to generate from his dripping blood. Chamunda with the other matrikas drinks the blood of the demon ultimately helping Shiva kill him. Ratnakara, in his text Haravijaya, also describes this feat of Chamunda, but solely credits Chamunda, not the other matrikas of sipping the blood of Andhaka. Having drunk the blood, Chamunda's complexion changed to blood-red. The text further says that Chamunda does a dance of destruction, playing a musical instrument whose shaft is Mount Meru, the spring is the cosmic snake Shesha and gourd is the crescent moon. She plays the instrument during the deluge that drowns the world.(Reference:https://www.devshoppe.com/products/goddess-chamunda-yantra-on-copper-plate#more-anchor)

O Destroyer of the darkness of ignorance, Ever-free, Supremest of the Supremes, The form of the AkhaNda-Brahmavidya, and the Embodiment of consciouness and bliss, we always meditate on you at our heart-lotuses. Your navarNa mantra has been explained variously. It is the giver of ever-Good. One can not apprehend even a fractional quality of this Mantra. Because of good deeds of many past lives, one can understand the glory of this mantra.

Om is pranava representing the Brahman. Aim is the vija that destroys the darkness of ignorance(Mahasarsvati), Hrimm is the vija of Sadrupatmika Mahalakshmi and Klim is the bija of Ananda-rupa Mahakali. The word 'Chamunda' means : chAnAm vuddhinAm vA sukhAnAm muNdam iva sthitA yA --She who is the pinnacle of the intellects and blisses. Vit+che = vichche. Vit means knowledge, cha is a neuter gender term representing the Truth and I is Supreme Bliss. The meaning of the navarNa mantra is : O SachchidAnandarupini Brahma-mahishi ChamuNdA, we meditate on you to acquire Brahma-vidya.

The rishis of this navarNa mantra are brahma-Vishnu-Shiva, chhanda is Gayatri,mUshnik and Anustup. Devis are Kali, Lakshmi and Sarasvati, Shakti- Nanda ShAkambhari and BhimA, vija is RaktadantikA, Durga and Bhramari, and the tattvas are agni, vayu and surya. (Reference: Sri Sri Chandi, Udbodhan, page 4-5).

The dhyAna-mantra of Devi ChAmunda is:

meaning : the fierce form of [ChamuNdA]-Kali emerges with a frightening face. She holds sword, noose, and a strange-looking khatvanga.She wears the garland of human-heads. She wears a skin of tiger. She is just skin and bones, with a huge mouth, long and swinging tongue, and Her eyes are red and sunk.She fills the world with very loud sound.

The word yantra is derived from the root 'yam', meaning to control. As worship of this helps to control all the internal and external enemies, it derives the name 'yantra'.

In what kind of Hindu ritual are these used?

Yantra is a part of the worship of the Tantrik deities.

yantram tu griham iti uktam grihasthA devaytA matAh, meaning that the yantra is the house where the devatA resides.

Brihat-Tantra-SAra gives this yantra as the combination of one upward and one downward triangles with a downward triangle and bindu inside with encircled by an eight-petal lotus and sorrounded by bhupurs or gates on the four sides. The Yantra has to be written or engraved on vurga-patra, gold or siler plate:

To conclude, through Chamunda yantra one can get her blessings of the Mother Goddess. By keeping the Chamunda yantra, worshipping it properly chanting Her mantras , the aspirant invoke the Supreme Goddess and ask her to come into his life to fulfill all worldly and spiritual desires with ease.

The Chamunda yantra has the effect of bringing joy and confidence even while trying conditions are mitigated. Clears all demons away and keeps them away – the aspirant invokes the powerful Chamunda to protect and defend him from negative influences.

WARNING: SUCH TANTRIK YANTRAS/DEVIES SHOULD NOT BE WORSHIPPED UNLESS GUIDED BY AN ABLE GURU.

Not the answer you're looking for? Browse other questions tagged yantra .

9
Yantras: creation, significance and importance?
2
Are the Sri Yantras that are devoid of color fillings defective?
5
Please describe the meaning of and the mantras associated with the Parashurama Yantra
3
How to find out correct Sri Yantra?
4
What is the purpose of Maa Baglamukhi Yantra?
4
Are there mentions in Hinduism about instruments which allows one to know others thoughts and influence them? And is it sinful?
4
How Yantras were designed?